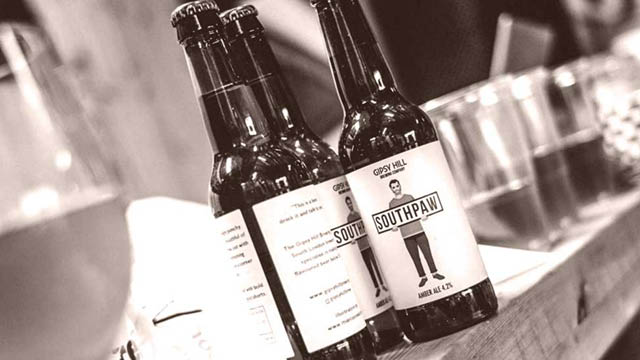 Gipsy Hill Brewing Company are delighted to announce the opening of their micro pub, The Douglas Fir.

Located on Anerley Road, Crystal Palace around a mile from the brewery itself in Gipsy Hill, their new micro pub will be selling all the Gipsy Hill core range and showcasing their special brews. All of this alongside offering a rotating drinks menu to the local community and craft beer lovers across the capital. Why Douglas Fir we hear you ask? Well the bar itself has been hand crafted by Gipsy Hill’s head brewer from a five-meter-long piece of Douglas Fir timber and it is a sight to behold. The south London venue was previously a hair salon, and has been transformed in to a cosy and inviting micro pub that looks like it has been a part of the local furniture for years.

Gipsy Hill pride themselves on making a core range of no nonsense, full flavoured, medium strength beer that keeps the conversation going and we’re sure that the Douglas Fir will be a talking point for the local and craft beer communities for quite some time.

“The Douglas Fir is an extension of our brewing ethos. It’s a place you can drink and talk to people. Our focus is to showcase some of the great produce being made right now. We love our local community; without them this project may have fallen at the first consultation hurdle. It’s been important for us to create a space that captures this.

We want to be able to share our expertise and the love we have for brewing beer with everyone that walks through the doors of the Douglas Fir and hope that this proves to be a great success and a warming sanctuary for a long time to come.”

Beatnik – Beatnik is our flagship, cunningly light pale ale that showcases all US hops above an uncomplicated malt base, our intention being to demonstrate how much flavour can be achieved in a sub-four percent beer

Dissident – Dissident’s roasted malt flavour dominates. Some chocolate sweetness resides behind the earthy richness. There’s some spice and molasses from the pilgrim and it signs of with a dry bitterness.

Southpaw – For Southpaw, we chose the hoppier end of the amber spectrum, once again using all-American hops and plenty of them. The malt composition is fairly complex, bringing sweetness roasted notes and overall balance.