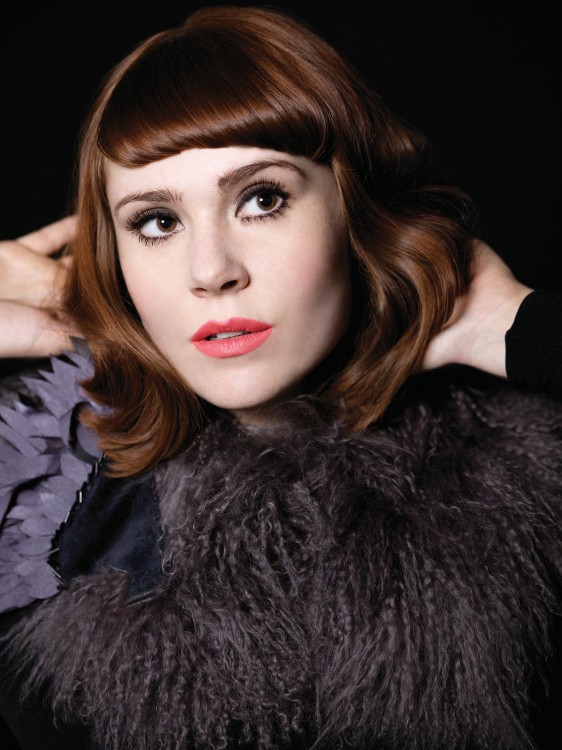 Foundations was the quirky, lead song off the album Made Of Bricks (2007) by the equally quirky Kate Nash and launched her name into the British pop scene.

Five years later and the ex Brit School pupil has flirted with acting, modelling, dj’ing, a spell in a different band (Receeders) and now in 2013 she returns to her solo music career with her soon to be released third album. Girl Talk represents her “rawest work to date” from an emotional perspective.

The first single off that forthcoming album is 3am a delicious bit of punk come pop music that once again sees Kate Nash prove why she has remained a highly sought after singer song writer.

First off thanks Kate I know you love to drop some mixes and you are heading over to Teen Vogue what tracks are you loving at the moment and why?

Syron’s ‘Here’-she is so cute and just from two of her videos that I’ve seen it seems like she has a really nice spirit and nature. I love when that comes across really quickly from an artist. I also love FIDLAR-their debut record just came out, they are like dirt punk surf garage and their live shows are AWESOME!

You seem a bit of a fashionista who or what has inspired your current fashion leanings?

You seem adept at virtually anything and I heard that you have got involved in films-what was that like and do you have any plans to act more?

I recently shot a movie in London with Sheridan Smith, Jaime Winstone and Oona Chaplin. It was super fun and all the cast and director were hugely inspiring. I shot two movies in NY the year before – small parts in independent films. It’s definitely new for me. I mean, I studied theatre at college and it’s something I’ve always wanted to pursue, so I feel really lucky and excited to be able to do so now.

Ok so the above appears to have kept Kate Nash definitely busy, so music, your last offering was an EP Death Proof why did you drop an EP rather than a full album?

My album is out next month. It just seemed like the right way to introduce new music. I think it would have been a bit soon to drop an album that quickly and I wasn’t ready with artwork and mastering, but I wanted to release some new material so the Death Proof EP was the right way to go.

3am is taken off your recent album generic question but tell me about 3am inspiration etc (it has a bit of a punk feel which I like) any inspiration actually from Pussy Riot who you supported?

The whole album has a different feel to it really, because I wrote it on the bass. I played in a punk band called The Receeders for a couple of years and I loved the way we wrote, so I was inspired by that. I also had a lot going on in my personal life and I always write from an honest place. This record feels particularly raw just because of where I was at. Girl Talk, again generic but give me a flavour of this latest offering what can we expect, collabos (I know you rarely do collabos though), genres.

It’s definitely a pop record, but in terms of today’s pop it feels totally different. Not as shiny I guess-it’s full of colour, pop harmonies and melodies. I feel like my voice has matured and can do more, I can shout and scream too, which I love. I needed a way to be loud and powerful and I couldn’t do that in my personal or public life. Music was my only escapism and vice-my friend told me it’s like a punch in the face!

What’s the promotional strategy for the album, tours, and singles?

How is your Nash’s Rock n Roll for Girls After-School Music Club going and what are the further plans?

It’s been going really well. I did a show with two of the schools around Christmas and they were totally amazing! They performed a load of the songs that they’d written themselves. I was so proud of them all and I’m going to look into trying to organise something for the summer with some of the other schools.

Since you have been in music what has been your key to survival in terms of longevity and in terms of not being over run by the pressures of being an artist?

I run away from certain aspects of the job like too much celebrity bullshit-I don’t like to talk in trashy ways about my personal life-I don’t bad mouth other artists. I stay true to myself and do what I believe in so that no matter what happens I can proudly defend what I’ve done.

How does Kate Nash chill out outside of music?

TV- I love Girls and I love South Park. I love watching movies and U-Tube interviews with Jennifer Lawrence. I read www.rookiemag.com and I love to eat and hang out with my bunny rabbit. I like whiskey and ginger with lime.

What was the last book you read that you absolutely loved and why?

Caitlin Moran’s How To Be A Woman, because she is hilarious and smart and so, so honest.