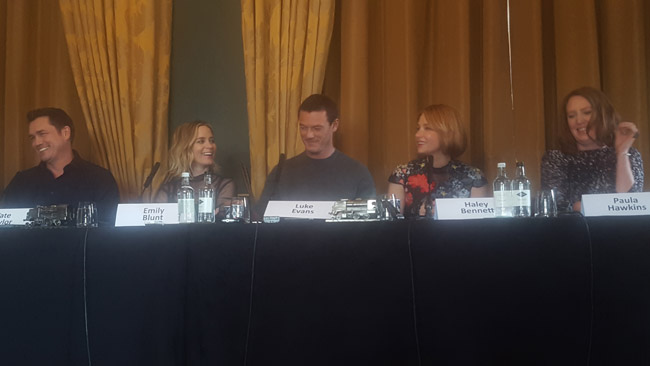 London 21st of September 2016: The Girl on the Train cast – which included Emily Blunt, Luke Evans, Haley Bennett along with Director Tate Taylor and author of the bestselling novel Paula Hawkins – were in London for the Premiere and Press Conference.

The Girl on the Train – which is based on author Paula Hawkins’ best-selling novel, the thriller that has riveted millions, comes to UK cinemas on the 5th October – Tells the thrilling story of commuter Rachel Watson (Emily Blunt) when she catches daily glimpses of a seemingly perfect couple, Scott (Luke Evans) and Megan (Haley Bennett), from the window of her train. One day, Watson witnesses something shocking unfold in the backyard of the strangers’ home. Rachel tells the authorities what she thinks she saw after learning that Megan is now missing and feared dead. Unable to trust her own memory, the troubled woman begins her own investigation, while police suspect that Rachel may have crossed a dangerous line. Paula Hawkins on seeing her novel transformed on the big screen

It’s been pretty extraordinary. The speed and the shockingly brilliant re-telling of my story which manages to be both faithful to the novel and also interesting and different in important ways.

Funny enough my first meeting with Emily and Paula, was the fact you needed to lean into the darkness and lean into the sexuality and if you didn’t these people would quickly become caricatures and they wouldn’t support the story that Paul told.  They were important characters and we basically said we are going to go for it.

Hayley Bennett on her complicated character of Megan

It was a dream role, surprisingly and also roles that I felt a lot of dread coming to work every day. I sometimes didn’t want to get out of the car; I didn’t want to face this. Ultimately these are real issues that she’s suffering, I think in her heart she feels that she’s committed probably in the greatest crime. She hasn’t forgiven herself, a lot of things spiral from that.

Luke Evans on the Reality of Scott

He’s a man with a lot of questions and not a lot of answers and everything going against him. He loses his wife, she goes missing. The last time he saw her they had this terrible argument. Then finds out these terrible truths about her through other people. He is in a vulnerable position by someone who he believes because he wants to believe. I’m not sure if he wasn’t in such a vulnerable state he would believe what Rachel is telling him. I think he wants to believe it because he wants answers, but he doesn’t get them. He’s a broken soul and tormented by the betrayal, loss, and regret all these horrible things which are very common human feelings. As an actor, it was very easy to understand it, if not relate – I’ve not been through those things he’s been through – I can understand the pain and emotionally journey he is going on. I felt bloody sorry for him really most of the time (laughs) He did have anger issues and he definitely had a tempestuous relationship with his wife. He didn’t understand her well enough; he didn’t know half of the things that were going on. There was a lot to play with, really enjoyable, but dark. I enjoyed every minute of it.

Emily Blunt on the appeal of Rachel

The appeal really as a whole with the film I think it is such an unusual circumstance to have your lead protagonist be female and a black out drunk (laughs). Women are often required to be held in a sort of ideal of some description that they have to pretty or likable or witty or something and I think this character people just don’t want to breathe the same air as her. That sort of toxic person physically and mentally, I’ve never gone there before, I’ve never gone to the depths that sort of despair. Her infatuation with alcohol, and they fact that it’s the only relationship that she has in her life. It was something that I had never explored and I wanted to explore it I guess. With only 4 sugar bottles on a big budget film, it transpired that Luke was not a good aim and only managed to get the right aim of throwing the bottle at the wall on the very last bottle.

Paula Hawkins arrived on set one day and told Haley she was exactly how she imagined Megan to be, Haley thought it was a horrible thing to say.

The reason that location was moved from London in the book to New York in the film pre-dated Tate Taylor’s involvement. The location wasn’t really important as the story was in the minds of the characters, the train and in their personal spaces – The city is barely represented.

Keeping Emily’s accent added to the isolation of Rachel’s character and what she was feeling.

Paula Hawkins wanted to explore the theme of women at the age where it’s socially expected to start a family and their issues surrounding that.