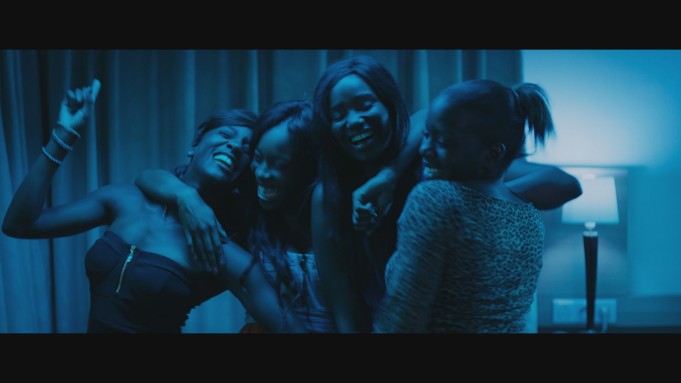 The French have always been pretty decent at making good watchable films, none of that fluffy unrealistic stuff we are subjected to from the states and, while this isn’t one of the best I have ever seen, they have done it again in the form of Girlhood.

Girlhood is set in the lower class suburbs of France, taking a look at the life of a young girl called Marieme (Karidja Toure). She wants more out of life but unfortunately her grades at school aren’t good enough to take her to the next level and her home life is oppressive. A meeting with 3-spirited girls randomly takes place; Marieme’s life takes a change in another direction. She changes her name to Vic, Changes the way she dresses and looks and quits school all in aid to be accepted in this new gang life.

The story follows Marieme’s growth into a hardnosed young woman who takes no crap from anyone, which eventually she’s her leaving home to escape the violence at the hand of her older brother.  This film certainly open’s your eyes to see that Britain is not the only country that has  poorer classes struggling to make their life better but due to their circumstance take the easy option instead of applying themselves to make a change for the better.

Every single scene feels real and raw, every inch believable and this is aided by the dialogue at times, but there is an element that the film has more of a visual impact than a verbal one. The conversations between any of the characters seem a little superficial, nothing of any real substance is discussed, it’s like they are trying to hide what should be said. This can make the film seem a little too dragged out.

One stand out scene, see’s the 4 girls having a party of their own in a hotel room, just chilling out and doing what young girls do, trying on dresses, messing around, pigging out on junk food and just having a good time, this is aided by the little sing and dance show they put on to let loose and feel free as they lip-sync along to Rhianna’s Diamonds, which after viewing the scene Rhianna and her management decided to waive the fee they would normally charge to have it included in a film.

The cast play a major part in making this film feel like you could be watching a real life story, every act, every moment played out on screen seemed effortless and it was like they had been playing those parts all their lives.

Girlhood, even if a bit too long, is an interesting and intriguing story, full of little twists that will keep you second guessing throughout. A big disappointment however was the ending, it left the film feeling like they just gave up and lacked the imagination to seal this otherwise enjoyable film off with the satisfying ending it needed.

Girlhood is in cinemas on the 8th of May.