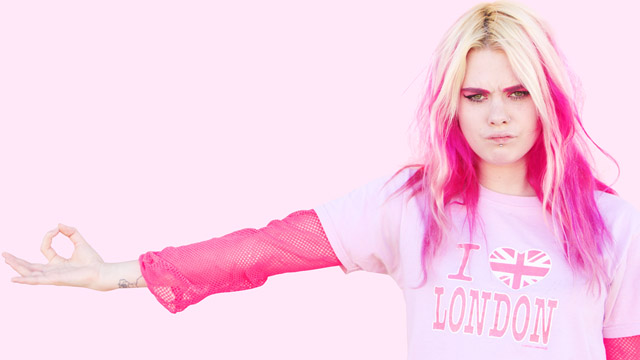 Following on from an incredible 2016 that saw her take the UK by the pink, fluffy balls, London’s most charismatic rising star GIRLI announces the release of new single ‘Not That Girl‘, taken from her forthcoming new ‘Feel OK‘ EP out this April 11th – which features Lethal Bizzle on the title track.

Opening her new single “Take off my clothes and it’s me underneath them, this is full time not just me on the weekend”, GIRLI’s statement of intent is as strong as ever.  ‘Not That Girl’ sees GIRLI’s characteristic vocal comes to the forefront of the track whilst Black Butter signee and producer King Henry (Major Lazer, Beyoncé) provides a stripped back, slick beat.

The ‘Feel OK’ EP also sees London grime MC Lethal Bizzle jump on the title track with GIRLI with production from Diztortion (Lethal Bizzle, Tinie Tempah) as well as finishing with the Dimitri Tikovoi-produced ‘Find My Friends’, which recalls the frenzied chaos and everyday observation of her earlier track ‘ASBOys’. Speaking on the track, GIRLI explains

“‘Not That Girl’ is a shout out to the smirks I get on the tube for wearing what I wear, the horror in strangers’ faces when they see my pink hair, the sneering guys outside the pub who think that I care. It is the quiet knowledge that as long as I continue to be who I am and not the girl that others would like me or expect me to be, that I will overall come out on top. It’s a mockery of mockery, a song of low-key empowerment in knowing that you’re the only one who understands why you do what you do.”

One of London’s most polarizing artists, GIRLI has been garnering a loyal fan base since the release of her debut double A side “So You Think You Can Fuck With Me Do Ya / ASBOys” in 2015.  Since then GIRLI has come in leaps and bounds, working with a series of incredible producers and writers whilst being championed by the likes of i-D, DIY, Noisey and the Guardian.

GIRLI’s live shows are a raucous whirlwind of teenage chaos from start to finish.  Following a support tour with Oscar and a series of sold out headline shows (including a partnership with UK collective Girls Against) GIRLI will be heading out on the road again for two headline shows this April at London’s Electrowerkz and Glasgow’s Stereo.

‘Feel OK’ will be released on April 21st via PMR