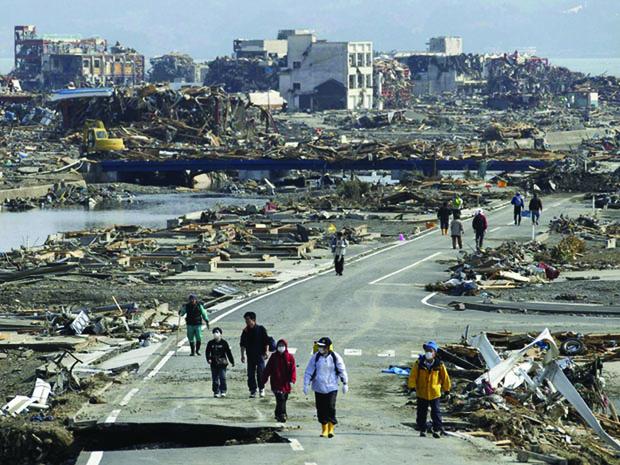 The advancement of technology has given us, among other things, the ability to observe events as they happen around the world.

As a nation, we are enthralled and can share and enjoy with the world such events as New Year celebrations and we were gripped with pleasure and patriotism when Prince William and Kate Middleton exchanged vows in Westminster Abbey. Those very satellites have also brought us disturbing images of the international disasters that have occurred in recent times. We have witnessed the devastation caused by the earthquakes in Haiti and Chile, and reluctantly observed the bloodshed and complete disorder that has erupted in countries such as Thailand and Syria due to border clashes.

On a daily basis, our human emotions are tested by unexpected events that can burst our bubbles of security and stability. TV news, online reports and newspapers are crammed with tragic stories of war, poverty and fatality that invoke shock, grief and disbelief. Sadly, the initial shock of the triple disaster in Japan and the willingness to assist those hit by the floods in Brazil is rapidly replaced by our subconscious easily slipping back into our own lives and normality.

However, amid the despair, feelings of hopelessness and loss of life, we at Flavour wish to recognise the human resourcefulness, dedication and global benevolence that people have shown during such devastating times.

Seismic waves of generosity for the people of Japan
On March 11, The Great East Japan Earthquake/Tsunami reportedly left approximately 13,013 people dead, 14,608 missing and a real threat of a nuclear crisis. This unforeseen calamity shattered the lives of its inhabitants, leaving thousands destitute and without basic necessities. Its severity extended to their service sector, having a devastating impact on their fishing and export industry, and bringing disruption to their farmland and irrigation facilities.

Yet concealed behind the statistics and heart-wrenching visual images are generous offers of assistance and stories of hope. Companies supplied employment opportunities, more than 15,000 medical experts offered remedial care and 135 countries gave financial backing. This tragedy revealed our global willingness to help each other, whether by deploying US naval personnel to help victims, or assisting with the restoration of the Japanese economy. Separating miraculous rocks from rubble in Haiti
This international enthusiasm to help countries blighted by natural disaster was demonstrated last year by the numerous rescue attempts to free those trapped following the 7.0 magnitude earthquake that struck Port-au-Prince in Haiti.

After the demise of the infrastructure and multitude of deaths (in a country already blighted by poverty), came the miracle stories, illustrating how responsive and resourceful individuals can be when faced with adversity. The world was privy to the collaborative efforts of locals, missionaries and outside helpers, who desperately fought to retrieve people of all ages, trapped in the rubble. From 15-day-old baby Elisabeth Joassaint, who astonishingly survived for seven days without any food or drink, to the 84-year-old Maria Roman, who despite suffering a crushed chest and an infestation of maggots was miraculously left with sufficient energy to alert people of her presence.

Rising to the challenge
As UK citizens, we are fortunate to be able to look out the window with the expectation that the same buildings will be there to greet us. Complacency may play its role, but each morning, we wake knowing the Underground will take us to our destination, retail stores will be able to accommodate our last-minute shopping trips and that the house key we carry will unlock the door to the place we call home. Most of us love travelling overseas and experiencing diverse cultures and environs, but how you would cope if you were stranded, as a tourist, in the midst of a natural disaster?

Jesse Hagopian travelled from the United States to Haiti as an Aids awareness promoter when the earthquake struck in 2010. Although he possessed no medical experience, he was one of many tourists who helped survivors afflicted with fractures, head injuries and broken bones. He hailed the locals for their ingenuity in setting up clinics – with little or no supplies – and resolved to return to the US to raise funds for the victims of the earthquake.

Piercing the veil of ignorance and providing inspiration in Pakistan
Serious sexual assault is used as a tool of power by its perpetrator, and this forceful violation has sadly claimed many lives due to its traumatising and humiliating nature. The act itself cannot be erased, but once authorities have been alerted, here we know we have the Sapphire Unit (a specific division of the police force that works to apprehend the culprit), as well as access to health clinics and counsellors. And we also have a legal system that works to penalise, deter and keep such offenders off the streets. But what if culture dictated differently and our human rights were suppressed?

Mukhtaran Mai was viciously gang-raped after her 12-year-old brother was accused of allegedly having an affair with a clanswoman in Meerwala, Pakistan. It was presumed she would commit suicide, but she defied cultural norms and expectations by instigating a three-year battle against the 14 responsible for the attack. She now lives in fear following the Lahore High Court judgement that reversed five of the six convictions, but has captured the admiration of millions of people worldwide. Refusing to remain passive, she has set up local schools, welfare/resource centres and become a global activist for women’s rights.

Inspiration from the ‘rape capital’ of the world
Despite the signing of the peace accord in 2003, the Democratic Republic of Congo remains overwhelmed with random arrests, brutality, disease and famine. Epitomising contradiction, it is the poorest country, yet the richest when it comes to resources. But with 5.2 million children out of education and ever-increasing reports of brutal attacks, its inhabitants are forced to live in trepidation, with little or no hope or assets.

Horrifically, there is a deeper war ranging among Congolese women in 2011. A war that accepts gang rapes as the norm and an indulgence in animalistic acts, such as using bottles and gun butts to rape women. It is hard to comprehend such torturous acts that leave women with battered bodies, void of feeling and rejected from their loved ones as being part of the everyday: stories of females tied to trees and violently raped for weeks, with only water to sustain them, are humdrum; accounts of babies as young as 18 months being rushed to paediatrics with broken legs, following sexual attacks are standard; leaving victims condemned to life as outcasts, robbed of common bodily functions.

Nonetheless, there are a few who fight against this oppression – one response being the erection of the City of Joy. Founded by Denis Mukwege and Christine Schuler Deschryver, this is a haven where survivors are given the opportunity to heal and are bestowed with education, vocational training and skills to carry them through life. This is just one of several pioneering schemes available to the people of DR Congo and one part of the revolution.

The legal system is also making its mark, as demonstrated by the groundbreaking case of Lieutenant Colonel Kibibi Mutware, who was the first army official to be tried and convicted of rape crimes.

Project Sierra Leone
Flavour talked to Margaret Kadi, the founder of an inspirational project set up to empower the people of Sierra Leone and ensure that workers are paid a fair wage. Producing cutting-edge collections, including bags made from the finest African cloth and beautifully tailored kaftans, every product is locally sourced and made by talented Sierra Leonean artisans.

Margaret lived in Freetown till the age of 16, emigrating in 1993, following the civil war. A return visit inspired her after ‘meeting women who made me realise how so many of us have our priorities the wrong way around. They were the happiest people you could want to be around, even though they were not selling much of what they made’. She describes Sierra Leone as a country ‘symbolised by stunning mountains, white sandy beaches and fun-loving people, but effectively a paradise with little to no luxuries’. For Margaret, it’s important to highlight the country’s 50th Independence Anniversary, while reiterating the fact that ‘there is still widespread poverty and an entire generation with very limited opportunities to climb the social ladder’.

‘Small things matter’
Overwhelming acts of generosity can have a huge impact, so when we shun the charity workers on the high street, we can fail to realise the importance of what a small percentage of our earnings can do. We may acknowledge the inspirational individuals who triumph when faced with adversity, but still remain reluctant and cynical when it comes to providing financial assistance ourselves.

You may not want to contribute to one set charity on a monthly basis, but randomly allocating funds to different causes can provide a bicycle for the child who has to walk for hours to eat or learn, or ensure that every worker is paid the standard basic wage.

Numerous lessons can be learnt from the inspirational stories that have touched the hearts of humanity worldwide and shown the remarkable power of a community when it comes together – one should never forget that negligence is unforgiveable.