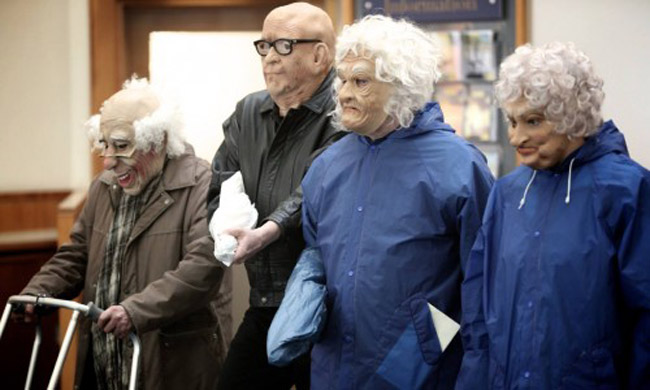 When you mention Nick Knowles, script writer and executive producer of film doesn’t ultimately spring to mind. However, with Golden years, the DIY SOS presenter is exactly that and he hasn’t done too bad a job however even with a meagre budget it didn’t turn out too great either.

Even behind the camera, in the Director’s chair, BAFTA award winning John Miller takes the helm to bring together a cast of well known British Actors for a geriatric crime caper which doffs its hat to the traditional English comedy. Unfortunately, it lacks to deliver any laugh out loud moments of entertainment. Golden Years falls short of any real adventure with a lack of any feeling.

Arthur (Bernard Hill) hits hard times when the bank inform him his pension is now worthless, his wife Martha (Virginia McKenna) suffering Crohn’s disease needs expensive treatment, and his beloved bowling club which doubles up as the local old people’s social hang out is under threat of being sold off. With the weight of the world, Arthur decides to do something drastic to fight back and prove there is life in the old dog yet. His solution, to rob the banks that stole his money in the first place, after deciding it was a stupid idea he gets lucky and manages to get hold of the first instalment of cash needed. Martha soon stumbles on his secret and joins her husband on a bank robbing spree just like a pair of old age Bonnie and Clyde wannabes. After all, who is going to believe a couple of old age pensioners would be responsible for these ‘sophisticated’ heists? All they need is one final heist, the big one, to rob the bonuses of the banks big players. The recruit their friends which include welder Brian (Philip Davis), thespian lovey Royston (Simon Callow) and his doting wife Shirley played by Uma Stubbs.

The film, considering its veteran cast, seems a little haphazard and amateurish. Scenes are strained, giving the feel that the actors don’t quite know when they should be delivering their lines. The older female cast is given a script full of sexual innuendos, one would assume to make it a little more current. It just makes the script feel awkward. The scenes between the two policemen investing the case also grate, the lifelong workaholic Sid (Alun Armstrong) and his young obtuse, vain nemesis Detective Stringer played by Brad Moore simply come across as vague which is less than endearing. The storyline doesn’t quite gel, leaving its flow stilted.

Golden Years in out in Cinemas 29 April.