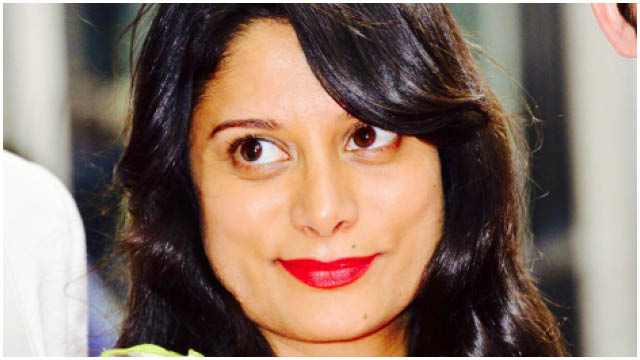 Actress Goldy Notay has starred in numerous stage productions/TV such as ‘The Town opposite Martin Clunes’ and Films such as ‘It’s a Wonderful Afterlife’ and ‘Sex in the City 2’.

With the impending release of Amar, Akbar and Tony we sat down for a little open and very candid chat with Goldy about the film her other new film Child Brides and weight gain for her role in It’s A Wonderful Afterlife.

Amar, Akbar and Tony is about to hit our screens where you star as Sonia, Can you tell us about the film and in particular your role?
It’s about 3 childhood friends from differing religious backgrounds but have the cultural common ground of West London. The boys love partying, girls, and general lad badness until life throws them a curve ball, which tests the foundation of their friendship. I suppose the grand metaphor being-what happens when the party abruptly ends and you are catapulted into adulthood. It’s a coming of age comedy with some pointed dark moments.

I play Sonia, Amar’s sister who is feisty, flirty, and gives the impression she’s been around the block a few times. She has strong loyalties as well, evidenced in her standing by her brother when the family is faced with an indelible crisis.

What attracted you to this role?
Firstly I was attracted to the script, which I found very comical but also a refreshing diversion from the norm. Atul, the director spoke with me about Sonia and initially I was quite apprehensive as she was unlike any character I’d ever played and I went into panic mode that I wouldn’t be able to convey her story convincingly. But I squeezed out the fear and squeezed into a Sonia dress! Sometimes you have to find your character on set. I remember looking at a few sample clothes for her. I tried on a too tight short dress (the kind that would ride up to your hips if you sat down) and I remember thinking “Yup, here she is. Here’s Sonia”.

One of the storylines in the film covers interracial relationships and how one guy is hell bent on winning over an Asian woman, even though we live in a multicultural country isn’t this still a sensitive subject in your culture and how do you think it will go down in the Asian community?
Hmm… I often forget about the attitudes of people outside my circle. My comrades are so left liberal that what we deem as prehistoric is actually a contemporary concern and sometimes quite a controversial one. I think some people might find the desire to win the affections of an Asian woman very funny and perhaps understandable. Others might not. We certainly didn’t set out to intentionally offend; neither did we construct a likeable homogenized film. I think that if people are still talking about the film on the journey home from the cinema, then we’ve done something right in creating a complex story.

I’ve heard you end up in the back of a car in a very sexy scene in this film; did you have any issues regarding this scene or was it one of the better days you’ve had on set?
I didn’t have any issues with the scene on paper but performing it was quite an adventure. It was on the coldest night of the year so I was wearing translucent tights, as we couldn’t have the heating on in the car due to the sound. After a few takes I heard my director bellow “Goldy, we need you to take your tights off”.  Apparently they could see them. It was really awkward as there wasn’t anywhere to change and I had people standing around me trying to cover me up and keep me warm with hot water bottles and blankets.  It was written as a warm night in the script and the scene extended from the back seat to the hood and it was meant to be hot and steamy. And all I can remember was cold and hyperthermia.

You’re about to start work on a film called Red River, it’s a story that covers another controversial subject on child brides. What drew you to such a heartbreaking storyline?
After reading the script, what I liked was that the story didn’t demonize the mother but also didn’t condone something which is alarmingly prevalent in the UK. I had an immediate liking for director Emma Lindley who also wrote and produced the film. It was a labour of love for her and that confirmed my decision to take on the part. The Forced Marriage Unit recently reported 1,300 cases with one in eight below the age of consent.  These are only the reported cases so the problem is possibly on an even greater scale. So I felt it was a topical and important story to tell.

You play a woman who was a child bride herself but grooms her own daughter for a child marriage, how much research did you do for the role and where there any instances in your preparation which made you want to pull out because it was too hard to deal with?
I read and watched everything I could and listened to anyone who would speak. Although I like extremities, our story lies in a space in between and I think some of the ambiguity allows for more of a discussion of the whys. So instead of playing a bunch of baddies, we all tried to find another space in telling the story. I also researched charities campaigning for victims of forced marriage such as Girls Not Brides, Karma Nirvana and Freedom. I never had any reservations about the story or pulling out. In fact, quite the opposite, the more I learned about what was happening to our girls, the more firm footed I became with the project.

Child Marriage is a tradition in some cultures but what are your views on the subject as an Asian woman?
Child marriage, forced marriages and honour is so entrenched in the fabric of certain families that to challenge or shift that thinking is an explosive excavation. Whilst it seems barbaric for us, many parents feel they are doing the right thing by procuring a marriage in order to secure a future for their child and in doing so, preventing any shame from staining the family. I unequivocally advocate personal choice and consent. Families who condone forced marriages always target the vulnerable: children, the disabled and even gay men. We mustn’t be fooled into thinking there is any value to this system.

You’ve appeared in Film (It’s A Wonderful Afterlife, Sex and The City 2), TV (The Town, Silent Witness, Holby City) and on Stage which medium do you prefer and what has been your favourite role to date and why?
My training was in stage and it’s my stomping ground. It’s tribal and dynamic and also terrifying. You can’t have another take if a line is lost but you can fix something that didn’t work the following night. All mediums require truth but the screen demands it. With screen, I had to learn to squeeze out the marrow, pluck the nucleus and keep the eyes alive.

My favourite stage role was Harleen; the high heeled fashionista in a play called Happy Birthday Sunita (Rifco Arts), which we toured across UK, Dubai and India. It was a sell-out success, and starred legendary screen actress Shabana Azmi, who also played my mother in the film it’s a Wonderful Afterlife.

The greatest challenge in a role was the character of Roopi in It’s a Wonderful Afterlife. Roopi worked at a women’s refuge and was a hard line feisty feminist but unlucky in love. She was also written 2 stone heavier than me and it was integral for me to gain weight. It was a juggernaut of an experience and the toughest approach to characterisation that I’ve taken. What can say? It was a release being able to stuff myself with bread, burgers and pasta but then I hit a wall and just couldn’t eat anymore. Until I discovered frappechinos. Oh yeah, bring on the whipped cream!

From your extensive list of roles I have noticed you have tried to stay away from being cast as the stereotypical traditional Asian woman, some would say you like to take on the more controversial roles. Is this a conscious effort on your part? Do you feel you need to change the perception of Asian women?
I asked a friend once what type of wine he liked and he said “I like it all. I just like some more than others”. I feel the same about my work. I rarely decline parts and if I do it’s usually because I’m less enthused by the generic and prefer going to those controversial corners and leaping beyond the demarcation points. It’s there we find those ugly hidden truths. Shabana Azmi once mentioned that “art was an instrument for social change”. Politicians offer policies and percentages.  Artists offer a microscopic perspective on the individual stories that lie in between those policies and percentages. So yes, if in doing so I can help to change people’s perceptions of Asian women, then count me in and let’s increase the percentages!

We like to add a bit of fun to our interviews so have added a few dating questions for you.
Who would be your ideal man and why?
Oh gosh. The guy I currently have is a good fit. He’s Sicilian and makes me coffee using the left side of the body because it’s the home of the heart. Ahhhh. And he took me out for dinner on international women’s day. That’s kinda cool. I’ll remember to be nicer to him in future.

What’s your perfect 1st date?
I was living in Bermuda. The Sicilian (same guy) invited me to his place by the beach. He cooked the sexiest dinner (yes all my best experiences involve something gastro). We drank wine under the stars and I whispered some broken Italian in his ear and then screamed after seeing a cockroach. Apart from the intrusion of the latter, it was a perfect night.

Give us 3 things that are a turn on and 3 that are a turn off.
Turn on:
1. A ‘yes’ guy (actresses don’t like rejection).
2. Guys who jog
3. Guys who take time styling their hair but still have something to say about the world we live in.

Turn off:
1. Crumbs and sticky mess residue in the kitchen
2. A full ashtray
3. Self importance (I know I know. Hypocritical coming from an actress)

AMAR, AKBAR AND TONY IS RELEASED IN UK CINEMAS ON THE 17TH APRIL.