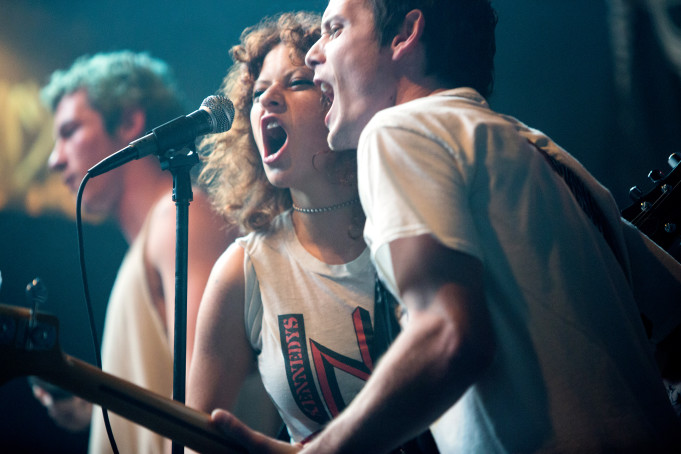 For only his second outing, Director Jeremy Saulnier has cranked up the heat in Green Room not only has he shown a flare for gruesome brutality but has landed the likes of legendary veteran actor Patrick Stewart along with Imogen Poots and Anton Yelchin to deliver a skinhead vs rockers horror that will shake you to your very core.

The underlying plot of Green Room see’s a virtually unknown rock group which includes a baby-faced Anton Yelchin and Alia Shawkat, desperate for gigs venture into the depths of backwoods America, hillbilly country for lack of a better definition. From the moment they step into the venue, they are greeted with hostility. Taking to the stage, that hostility is aided with bottles of beer and obscenities hurled in their direction, but they soon win over the crowd with their brash sound and don’t give a damn lyric’s. Pumped from their onstage antics they head to the Green Room to collect their belongings and stumble on a sombre scene with a dead girl lying on the floor. Already witnessing more than they should, they are forced to lock themselves in the green room in fear for their own lives as the story behind the death slowly unravels itself. When the owner of the club, Patrick Stewart, is called in things turn from bad to worse as it turns out he is the leader of the brutal nazi gang and the whole ordeal needs to be covered up at any cost. From this synopsis I hear you cry what makes this so thrillingly gripping, it’s a storyline we have seen time and again. However, what starts to unfold on the screen is nothing more than a refreshing plot which is littered with surprises as each one of the band members meets their horrifying fate. From being mauled to death by vicious dogs and many more scenes of stomach-churning violence.

The visuals have that 80’s like grainy feel about it, adding to its eerie and grisly atmospheric settings which are only made more prominent with a scene of Anton Yelchin’s arm practically severed down to the bone but the resourcefulness of the group sees them use duck tape to keep his arm intact.

Performances by every member of the cast are strong but a connection between them and its audience never fully develop except with the ruthless club owner in the form of Stewart, he oozes so much venom you can’t help but have nothing but disdain for the man.

Green Room is out in UK & Irish Cinemas on Friday 13 May.