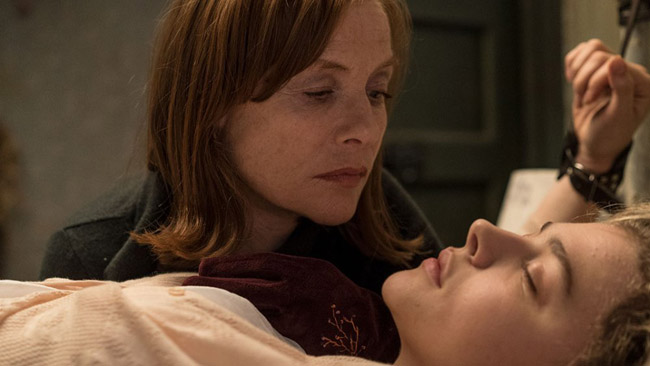 Trashy, predictable and lifeless, there just aren’t any thrills to be had with this thriller, although Isabelle Huppert makes for one special psycho.

In Neil Jordan’s latest, confusion reigns supreme, mostly from the fact this 90’s style thriller doesn’t quite know which route it really wants to take. On the one hand, Jordan seems to want to recreate the glory days of the thriller, when the likes of Basic Instant and Cape Fear ruled the roost, instead we end up with a transparent plot that lacks the guts and deranged passion any self-respecting stalker puts into hunting their prey.

Chloe Grace Moretz plays the role of Frances, living in New York in a lavish apartment with her wealthy best friend Erika (Maika Monroe). Stuck in a dead end job waiting tables at a restaurant and feeling the death of her mother, living in the Big Apple is not what she expected; until she finds a handbag on the subway and makes it her mission to find its owner, Greta Hideg (Isabelle Huppert). On the surface, Greta is a just a lonely widowed woman living in Brooklyn, she fills her days immersing herself in classical music. When the two women meet a mother-daughter kind of relationship ensues, Frances, filling the void of her deceased mother and Greta the absence of a family.

In reality, Greta is a full-blown psychopath, enter the same old troupes we have seen time and again. Frances’s realisation that this woman does this sort of thing often comes around all too quickly and any hope of a meaty plot dissipates just as fast. Plundering from scene to scene seems an almighty bore and tiresome chore, as Greta inundates Frances with text after text during the dead of night to just standing outside the restaurant where she works stood like a statue, blankly staring at her through a window.

Where the story is thinly written, the characters have no doubt had the life sucked out of them too. Huppert brings her talents to Hollywood after her star turn in Elle and slumps them on the table with immense gusto. She effortlessly exudes a haunting psychopath with a terrifying grace in one scene where she completely loses her cool in front of a whole restaurant of people, which ends with her being dragged out kicking and screaming by the men in white coats. As the film draws closer to its whimpering end, although having been involved in a rather gruesome kitchen fight that would floor even Dwayne Johnson, she becomes almost possessed by a demonic force and just keeps on bouncing back.

Although Jordan has a cast iron foot in the industry, you can’t help think that either one, he has lost his momentum or two, he wanted to deal audiences something of a bit of tongue in cheek but clearly forgot the whole point of filmmaking. Trashy, predictable and lifeless, there just aren’t any thrills to be had with this thriller, although Huppert makes for one special psycho.

Greta is out in cinemas April 19th