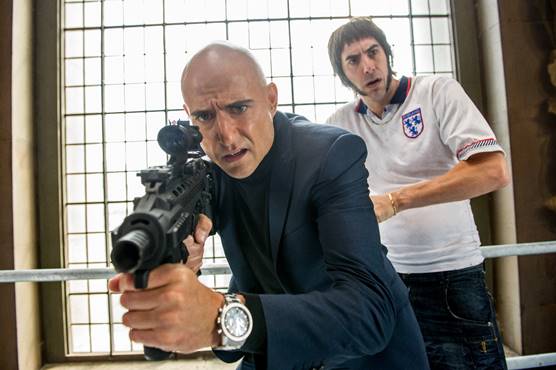 When you think of Sacha Baron Cohen and his past creative ventures of Ali G, Borat and Bruno you know you’re in for one hell of a non-PC, vulgar, stereotyping yet hilarious ride. By no means does Grimsby disappoint in any of these areas. If your faint of heart or easily offended walk away now.

With Grimsby, we see a new character from Cohen in the form of Nobby Butcher, a northern idiot with a big love for the beautiful game, Football. An endless amount of kids, one which has his head shaved in order to convince people he has leukaemia just so they can claim extra benefits. This family certainly wouldn’t look out of place on the stage of the Jeremy Kyle show. Besides Nobby’s idiotic ways he has a big heart at which family and loyalty is at the very base. Nobby also has a long last brother, Sebastian (Mark Strong) who he hasn’t seen in 28 years, but has never stopped searching since they were separated when Sebastian was housed with a family from London. Sebastian’s life couldn’t be further from Nobby’s; he’s a spy in the secret service and one who is at the top of his game. He’s fast, slick and ready for action, he really could give Bond a run for his money. When Nobby finally finds Sebastian it’s far from a joyous reunion when he inadvertently foils Sebastian’s attempt to take out a hitman and causes all sorts of mayhem. One which sees’s Sebastian hunted by his own firm forcing him into hiding. With a price on his head, Sebastian and Nobby work together to find the real hitman which takes them to South Africa and the world cup finals (in which England are the finalists) to save Sebastian’s life and the world from being rid of the scum of the Earth. Grimsby isn’t all just action and vulgarity, however, Cohen has shown a slightly softer side in his screenwriting abilities when we are taken on a flashback journey to when the boys were kids. Showing how close their bond was – especially when they were orphaned and how Nobby sacrificed his own happiness in order for Sebastian to have a better life. Some of these scenes were extremely touching.

With a cast that includes Rebel Wilson, Penelope Cruz, Gabourey Sidibe, Ricky Tomlinson and Johnny Vegas it’s the relationship between Cohen and Strong that is the strongest. The chemistry between the two actors, no matter how absurd, just works so well. Cohen’s dim-witted Nobby paired with Strong’s straight tough as nails Sebastian gel with hardly any effort even if Cohen’s northern accent was at times questionable.

Grimsby is out in UK Cinemas 24th of February.