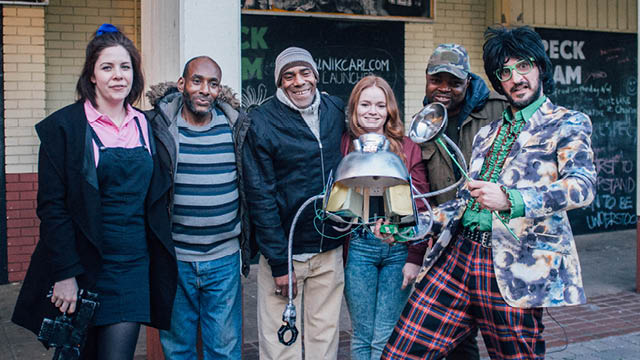 A pioneering British movie, which premiered last night in Peckham, has become the world’s first to be powered by an online ‘crypto-currency’.

The producers of Powder’s Peckham have given stars, fans and investors a 25% profit share in the movie using 25 billion ‘Kevcoin’, named after the sci-fi adventure’s lead character and inspiration Kevin Powder.

The film received a standing ovation at its sold out premiere, at London’s PeckhamPlex on Wednesday April 20. The whole project was conceived, shot and edited in just 35 days – with footage being filmed and added just minutes before the premiere was due to begin.

The on-screen action follows ex-roadie Kev’s exploits – documentary-style –as he attempts to make a sci-fi epic called The Day Peckham Stood Still. It features real people met on the streets during filming, including rapper and fragrance maker Lollipop and local brothers Steve and Tony Townsend.

The whole project is the brainchild of comedian and director Jason Attar, who also plays Kevin. He came up with the idea of Kevcoins as a way to give fans, investors, cinemagoers and those appearing in his “epic” a stake in what he hopes will be its eventual success. Powder’s Peckham is the follow-up to 2013 comedy One Night In Powder, which won two awards, Best Micro Feature and Best Comedy, at the London Independent Film Festival.

Jason says: “This has never been done before. Independent films have such a difficult time reaching an audience, so we thought this could be a good way of building up that audience from the beginning, having advocates talk about it and ultimately share in its potential success.

“For instance when people buy tickets to come and see the movie, including for the premiere, they will receive one million Kevcoin – worth around 60p but increasing/decreasing depending on the success of the movie – giving them a small but active stake in its commercial prospects. “The coin will exist forever and once the film recoups its initial costs of £25,000, 25% of the profits will be shared among those holding Kevcoin. The payment will be made to the person’s public wallet address in Bitcoin.”

Jason has been performing improvised comedy for 20 years, winning awards for short form comedy and feature length films. He has starred on Channel 4, Comedy Central and Nickelodeon, where he dislocated his shoulder on a live children’s show.

He added: “Kevin Powder is similar to Sacha Baron Cohen’s creations, but the difference is he focuses a lot more on the real people we meet and they spend far longer on screen. It’s exhausting trying to film and edit the whole thing in just over a month with just two crew, but I am determined to show it can be done.

“The character came from some advice that comedy commissioners had about me being quite fearless in front of the camera. So I wanted to create this physical buffoon. I wanted to get under the skin of someone that had utter belief in their own self but actually does things a bit upside down.

“Peckham is a great place to film, as it has the perfect mix of traditional Londoners, a large ethnic community and new trendy types.

“Finding people off the street and improvising with them is notoriously difficult. But the majority of the time people are fine and enjoy the experience. Two brothers we met – Steve and Tony – were so good they play lead roles.”