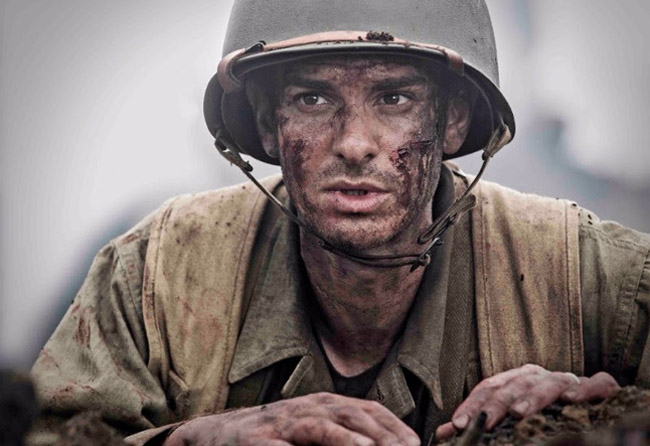 With any war, one thing you’re guaranteed is a copious amount of blood and grisly gruesome scenes, with the Mel Gibson, directed Hacksaw Ridge, he, in no way shy’s away from that very fact – those with a delicate disposition do not enter this thrillingly gripping story lightly or you may find yourself reaching for a sick bag at the site of bodies being blown apart and guts spilling helplessly from mutilated bodies.

Hacksaw Ridge is based on the true story of Desmond Doss, a young man who was the first conscientious objector to receive the US Medal of honour when he served in WWII in the relentless bombardment of warfare in Okinawa without even holding a gun. Coming out alive is not only a truly awe-inspiring feet but this visually spectacular, hard to believe tale is so absurd you think this would be the work of fiction, a work that jumps right from the pages of a creative mind, there is no better story to make cinematic gold. No matter what the political beliefs are of Gibson, he has created a work of heartbreaking and horrific beauty, a work that is truly deserving of the 65 awards this film has been nominated for and the 21 already won so far this awards season.

Our story commences sixteen years prior to Desmond Doss (Andrew Garfield) joining up to play his part. Set in the sprawling spectacular views of the Blue Ridge Mountains, Virginia, the son of Tom Doss (Hugo Weaving), a man traumatised by his own days on the Western Front during WW1 which took the life of so many of his friends. So traumatised he spends most of his days an ill-tempered drunk. After a brutal fight with his own brother, in which Desmond nearly kills him, he vows never to be violent again. 15 years on, filled with his blind faith and compassion for people he meets his one true love, pretty nurse Dorothy Schutte (Teresa Palmer) – completely smitten with this women, she is the one he truly lives for – just before he found himself wrestling with his conscious to sign up to become a non-combatant medic.

On his placement into a training camp – reminiscent of the stories we hear today of young soldiers treatment – Doss is ridiculed, bullied and beaten for his beliefs and even stands trial for a court-martial for his refusal to fire a gun which eventually sees’ the military court return Doss to his unit allowing him to join as a medic on combat missions. The first half of the film lays all the crucial foundations for the story, with character development playing a pivotal role. Whilst everything seems fairly calming with even a wit-filled Vince Vaughn as Doss’s sergeant to break up the brutal treatment this man suffers at the hands of his unit, it truly is the calm before the explosive storm of the second half.

The one thing Gibson does exceptionally well is the creation of violence on such an almighty scale, not shuffling away from any brutal visuals which might make some uncomfortable, he quite clearly shouts, this is a war, this is what happens, now just bloody deal with it, making it even more effective. Once Doss and his unit hit the shores of Okinawa, Japan the battle scenes are almost relentless with its combat explosions, yet in between, when all lays calm, people are dying, Garfield as Doss and his extraordinary bravery in the face of adversity blasts louder than any volatile battle.

Garfield proves to be a complete revelation in bringing this slight being of a man, a devout Christian to life; effortlessly portraying Doss’s humility, vulnerability, immense bravery and stubbornness in his beliefs. Yet another career defining role for Garfield there is no doubt, and Gibson in choosing Garfield for the role just proves that in his comeback as a Director his vision is perfectly placed at the top of the creative spectrum. Gibson, a man of many displeasing misdemeanours in his life, for which he seems to be forever trying to make up for, may still be despised, but on a filmmaking level, with Hacksaw Ridge, he has created a perfect spectacular and thrilling vision.