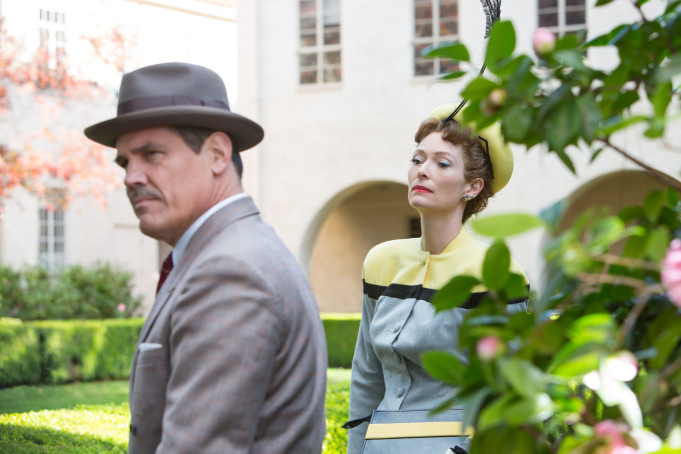 The Coen Brothers are back and this time with Hail, Caesar!.  They do only what the Coen’s do best, create a story that lacks any real focus but hope throwing in a few A-list actors will satisfy the masses in this comedic tale of 50’s Hollywood politics. Hail, Caesar! very loosely, revolves around the kidnapping of Capitol pictures owned star Baird Whitlock (George Clooney), the star of the film Hail, Caesar! on set, at the hands of what can be construed as the Hollywood 10, a group of communist Hollywood screenwriters. At a time when the studios owned their stars and churned out movies hand over fist whether they are decent or not, it falls to the head studio fixer Eddie Mannix (Josh Brolin) to keep things running smoothly on each set as well as keep the gossips at bay. Eddie finds himself turning into studio cop as time rumbles by to find out what and who was responsible for the disappearance of Whitlock and to get him back no matter what the cost. The problem at the very heart of this film is it appears to have ripped off a number of films, one specifically in the form of Barton Fink where they use the same fictional studio in Capitol Pictures. We have an ensemble cast with the likes of all singing all dancing yet mysterious Channing Tatum, A synchronised swimmer with a mouth like a sewer in Scarlett Johansson and Ralph Fiennes as a pompous sniping Director. All of which appear in sketch-like scenes that make up this crudely tangled up storyline.

As we follow Mannix – think a day in the life of situation – as he roams from studio to studio fixing problems and basically playing babysitter to the stars, we are taken on a trip into the Golden age of Hollywood as they produce film after film. Not only does Mannix fight off the gossip columnists, a double role played by Tilda Swinton, but is charged with changing the cowboy gun-toting actor Doyle’s image into a suit-wearing more wholesome character with a new love interest. Tatum delivers on the dancing front with a great little tap number but there is more than meets the eye to this blue-eyed Adonis male lead as he hides a very political agenda.  Then we have Doyle who is happy enough to do as he is told but is so dense he has a hard time making the transition from horseback to sophisticated playboy at the annoyance at his very British director.

What we have here is a film that lacks any real focus; we jump from studio to studio and back again clumsily with a lack of coherency. There are way too many sub-storylines going on to make any real sense and quite frankly is a complete headache to watch.

Hail, Caesar! is out in UK Cinemas 4th March