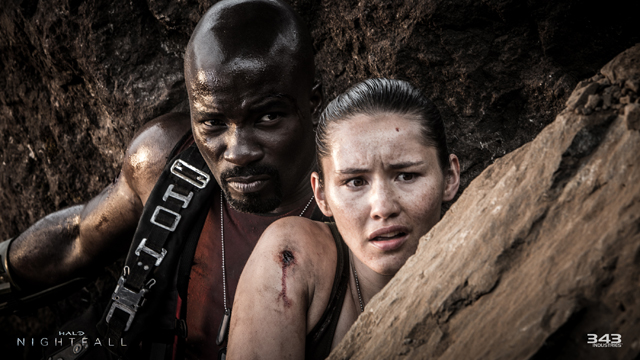 Mike Colter stars in Halo: Nightfall which tells the personal story of Jameson Locke (Mike Colter), a legendary manhunter and agent with the Office of Naval Intelligence (ONI), Earth’s most powerful and secretive military branch. The film provides the background to this pivotal new character in the Halo universe, who will play a key role in the next gaming instalment.

Whilst investigating terrorist “chatter” on the distant colony world of Sedra, Locke and his crew are caught in a horrific biological attack. Led by Locke, ONI agents are forced to coordinate with the local command who have a deep-rooted mistrust of ONI. As they unravel a plot that draws them to an ancient, hellish artefact, they are forced to fight for their survival and to make the ultimate choice between their loyalty and their lives. We spoke with Mike about the new role, the film and the game and the journey from the game to the film to the game. This is what he said.

How was the experience filming Halo: Nightfall?

Well, it wasn’t a glamorous shoot. One word that comes to mind is rigid. It was a rigid, rigid shoot. We were filming in Iceland for most of it so the location was beautiful, but it turned out that the weather was not like what we were expecting – it rained the whole time. We were up against the elements, and I think this added to the overall essence of what we were looking for in this film, being destitute on a foreign planet without a way home. In this sense it helped, but at times walking around in heavy armor for hours was tough.

Iceland was really phenomenal; I’d love to go back on a leisure journey or holiday. I went to the Blue Lagoon – actually, I went here about three times! Soaking in that water is so wonderful and regenerative. Just sitting in there gave me so much energy and made me feel so relaxed. I definitely recommend it if you ever get a chance to visit Iceland – when you leave the airport get your driver to head straight for the Blue Lagoon, don’t even go to the hotels first. What were your first thoughts when you were presented with the role of Locke, given the huge popularity of the Halo franchise?

I wasn’t familiar with the game in all honesty, but I knew that it was a popular game that people enjoyed and that it has a huge following. It’s a great brand that people are really dedicated to, and it always made me curious about it, to find out more. And so to be offered this part in Halo made me look deeper into what is was about. It gave me some opportunities to do things that I wanted to do, which was doing more action projects, like this, like sci-fi, to give me an chance to branch out and diversify and also get a chance to do a voice-over.

Did you prepare for the role by playing a lot of the Halo games and immersing yourself in that world, to help you become more familiar?

No, playing the game wouldn’t have helped me much, as my character, at that point, hadn’t been created or introduced in the video game. As far as the film, he was the only character who wasn’t a Spartan, and in the game it is primarily just Spartan super solders who can do these awesome things, that’s above anything humanly possible, and have these incredible suits on, I on the other hand, had to focus on my character’s journey and origin story, and the fate of his team when he left the planet. It’s more of him only as a solder and not so much what he was going to be when he becomes a Spartan, which is where the video game picks up from. It’s more of a human story that we’re trying to tell. How did you come to be casted in both Halo: Nightfall and the upcoming game?

I signed up for the film and then that led to the video game and the motion caption character, which would then go into the video game. I was approached as an actor to audition for the role in the digital film, that was the first thing that happened, then we moved on to creating the character for the video game.

It must be quite a unique experience playing the same character in both the film and video game. Has there been much cross referencing and how have they correlated?

The first thing is that they are both so different, acting on film verses doing motion caption verses doing voice-over is all different medias, so it’s not the same what that you’re trying to convey things. I’m used to acting, which relies on your total being, in front of the camera, trying to convey what the character is experiencing, but when you’re doing voiceover work you really have to get all that expression and emotion and everything through your voice and sometimes that can feel a little phony, because you’re trying to convey something that people can’t see and at times you feel like you’re doing too much, it was a bit weird at first but Amanda Wiseman, who directed the voice over sessions guided me through and you eventually get used to it. The motion caption was very technical thing and very subtle. You have to walk around in these funny suits with a camera right in your face, which can get a bit tedious at times. Watching it all back was surreal, the technology in these video games are incredible. What can you tell us about your character in Halo: Nightfall?

Locke is a ‘think first, act later’ kind of guy; always making a decision based on the fact that it can affect so many people, so that is something that he doesn’t take lightly. He’s a very logical, methodical man, and even though there are lives at stake, he always understands and knows that this is what he signed up for. I got in touch with my character, but I think it’s something that a lot of people would find hard to relate to – unless you’re in the military, people who put their lives on the line everyday – I’ve tried to understand that and try to feel what it would be like as a solider with nerves of steel and not be afraid.

What was it like working with the other cast members and crew?

We had a great time. They assembled a great team – our production crew were some of the few that worked on the game, and in Iceland and some others that had worked on The Game Of Thrones, so they were incredible. They were all just used to working long hours and shooting in weird locations, and were very professional all the way through, which was great. The cast were awesome; a lot of the cast were actually from the UK, I got to meet a lot of people and still keep in touch with a few of them and formed some lifelong friends. We had a great time even though the elements were harsh, we still had a great time and a lot of laughs; it would be cold, raining and we’re stuck on a mountain, tired and sleepy but what can you do, it was great. We had a fun time. You obviously enjoy energetic, action movie roles, but were you allowed to perform your own stunt & action scenes?

I’m getting quiet a bit more sign off to do more. Unless you could potentially die doing a scene or stunt then it’s usually OK. But I’ve never really been the type to throw myself in to doing my own stunts, because stuntmen are trained to do that and tend to be adrenaline junkies – they like it! One stunt guy wanted to fall from a large building, it was a huge fall. Huge! But he wanted to do it, but in the end we decided against it and used CGI. But that’s part of their job I guess, they love it. I do as much stunts as I can, when all the proper precautions are in place, because it’s not so much fun when you get hurt.

Do you think the film will appeal to people who, like yourself, were not aware of the Halo brand previously?

They’re trying to change a little bit of the narrative for Halo, and give it a story that would be able to connect to a reach a wider audience. One that would not have necessarily have been a fan of Halo video game series, and create a stand alone film that you could watch and connect to the characters and the story, and I guess generate an interest in the video game, regardless of who you are. I don’t think you have to just be a sc-fi fan or gamer to enjoy this.

The film is released digitally in the UK on Monday 16th March (and released internationally digitally on March 17th).