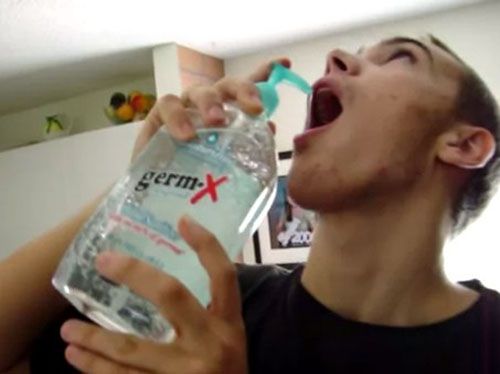 There’s a new trend amongst teens wanting to get drunk, and it surrounds an unlikely domestic item intended to keep us germ-free. Following the recent trend of cough medicine, hand sanitizer seems to be the latest in a string of crazed products being used to induce intoxication.

Teenagers in California were recently caught doing the unimaginable: getting drunk on hand sanitizer. Health officials are worried as only a few squirts could equal to a couple of shots of hard liquor.

A regular bottle of hand sanitizer roughly contains 65% of ethanol alcohol. It’s the main ingredient used in beer, wine and spirits. A cocktail made with the liquid would be 120-proof and to compare, a bottle of vodka is 80-proof.

Now doctors are warning that there are other harmful chemicals in hand sanitizers that could potentially kill. For teens there can be serious consequences, from sedation, to vomiting and slowed breathing. Drinking hand sanitizer poses the same risks as drinking alcohol for kids.

In California, where the trend first surfaced, there have been reports of 2,600 cases since 2010, and it’s becoming a nationwide issue. Helen Arbogast, an injury prevention coordinator at Children’s Hospital Los Angeles, told ABC News that, “Since 2009 we can see on YouTube it’s in all regions of the country.”

And it will be a difficult problem to combat. Hand sanitizer is low-cost and is available just about everywhere. A pocket size bottle of hand sanitizer is about £1 or less.

So what’s the advice? Parents are encouraged to keep an eye out for unusual behaviour or if hand sanitizer becomes essential for a child to carry.