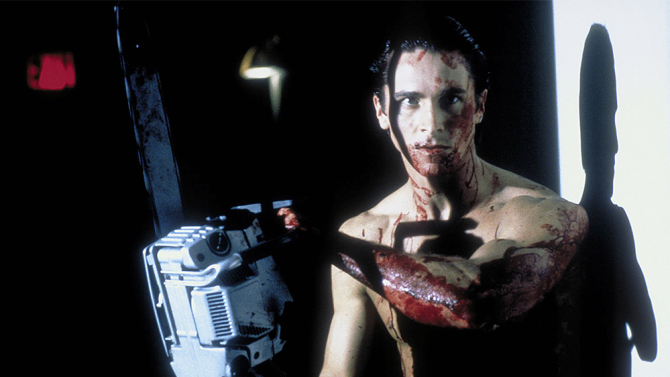 Sick of the monotony of huge cinemas, with cascading queues, problematic snack choices and undoubtably coming into close contact with the ‘talkers’ throughout the film? If you answered yes to one or more than may I welcome you to the Bulmers Cider collaboration with the Underground Film Club, located at The Vaults in Waterloo.

It’s currently playing host to a selection of well known and much loved films including ‘Elf,’ ‘Labyrinth,’ ‘Casablanca,’ ‘Groundhog Day,’ and then there’s ‘American Psycho’ which I had the head screw of watching.

This hidden gem of a building appeared seemingly derelict from the outside, with nothing more than a blank canvas of white but throw in some cinematic props, beaming set lighting, a free photobooth, superb smelling hotdogs and nachos, plus festive beverages and a perfectly stocked fridge of Bulmers new flavours including Bulmers Cider Crushed Red Berries and Lime, Bulmers Cider Bold Black Cherry, Bulmers Cider Pressed Red Grape and you had one shabby chic event venue.

Feeling a lot more exclusive than your average Odeon and Vue, we were welcomed into a vintage inspired waiting room with retro cinema seats to rest our weary heads and ponder the use of headphones that had been distributed. Some of you may be happy or sad to learn that the event wasn’t a hybrid of cinema and silent disco activity but instead the headphones were there to combat sound pollution that may have come from the overhead trains that frequently vibrated, which for me wasn’t off putting.

The atmosphere was already one of charm and the audience appeared enchanted by the auditoriums velvet seating and softly lit walls. The buzz of the film was further heightened when an usher introduced us to the film with a small snippet of crowd interaction and a much appreciated guide on how to use the headphones.

I am still trying to figure out this disorientating film set in the 1980’s of New York. I was in no way prepared for this dossier of egotistical, violent driven and barbaric depiction of a high time investment banking executive who chillingly finds the thrill and fantasy in torturing strangers and work colleagues.

We are introduced to Patrick Bateman, a 27 year old who comes across as self obsessed as we follow his daily grooming ritual and exercise program; it’s worse than any high maintenance woman and you instantly take a dislike to him. He is brutally honest, takes great disgust in situations that others wouldn’t give the foggiest about and he has no control over his anger. The first look into this is when he tells his dry cleaner who speaks no English that he will murder her as she can’t remove the blood like stain from his expensive bed sheets. His debut harrowing murder happens at random as Patrick speaks to a homeless man and seems to want to help him but then Jekyll and Hyde comes into play and he backtracks to launch a vicious attack in which he stabs the man to death before letting him have it with brutal kicks. The psycho admits to possibly killing between 20 to 40 people, a mixture of prostitutes and other lowlifes no doubt in his opinion and yet he brushes murders off like Jay Z brushes dirt off his shoulder, returning to work and planning his next lunch or dinner date.

Somehow ticking time bomb Bateman manages to hide his alternative psychopathic ego from his co-workers and friends as he escalates deeper into his illogical, gratuitous fantasies. The jealousy he harbours for a competing colleague brings about a situation in which he axes him to death, in an altogether humorous way as he dons a rain mac and dances hilariously to classic 80’s pop. He covers things nicely, packing some luggage and leaving a new phone recording explaining he has taken a trip to London but thinking this is out of the usual he is reported missing and an investigation begins.

Patrick Bateman is a puzzle to piece together, desperately wanting to impress others (comparing business cards and restaurant reservations), pushing them to pry into his decadent lifestyle but then snarling when they cooperate and ask what he feels is too much. We see things that aren’t actually there..or are they? After the murder of his colleague we see Bateman drag a suspicious looking body bag across the lobby of his apartment, noticing a trail of blood from Pete Allan’s dead body. There are more moments like this including a scene when an ATM machine commands him to feed it a dead cat, where he believes he has shot dead the security guard at his apartment but then a few seconds later he is alive and well. It’s hard to distinguish what is real and what isn’t, could this be how it feels to be inside Bateman’s brain? Perhaps these murders are just things inside his head, those terrible things you couldn’t comprehend following through with. Surely some of the scenes we witnessed were figments of his imagination! He runs a tight ship and as we are directed around his home his OCD becomes apparent- the cutlery draw is impeccable and the tools and instruments intended to hurt, torture and crucify are positioned in neat formations. There is a great mix of cringe inducing one liners which are certainly needed against the frenzied backdrop of insatiable bloodthirst, you’ll find yourself rolling your eyes at the hideous quotes that roll off Bateman’s tongue.

Without giving anymore away, you are left baffled as he eventually confesses to his killing spree in quite a matter of fact way in an erratic phone call to his lawyer. Has he finally scared himself senseless, having scared his victims and more so the cinema audience? When he meets friends for lunch the following day he bumps into his lawyer but things don’t make sense as the lawyer laughs at his over the top prank admitting that it’s the sickest joke his heard of referring to Patrick Bateman as a loser and explaining that Paul Allan can’t possibly be dead as he had been with him across the globe in London. What the hell?

This is definitely a film that needs watching four or more times to extract the truth. Follow #LiveColourful on twitter for your chance to win tickets for the screenings.