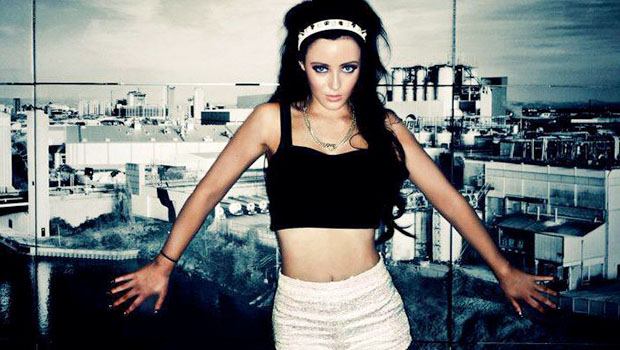 Hatty Keane released her new single No One Loves You on October 22. She turns 18 in a month but has already clocked up over 100 shows supporting the likes of Labrinth, Pixie Lott, Angel, Chipmunk, Ed Sheeran, Pitbull, Wretch 32, Lemar, Tinchy Stryder, Katie B, Olly Murs and Wiley. She embarked on her own Earthshakes tour over the summer stopping at OsFest, Dagenham Town Festival, Manchester Pride, Sundown Festival and The White Nights Festival in Russia. It’s been just over a year since you graced Flavour’s pages; fill us in on what’s been happening.
Last time was the release of Best Kept Secret. Since then I’ve supported Ed Sheeran and Wretch 32, I performed at Britain’s Next Top Model live event. The main part was meeting Si Hulbert and he’s produced my new stuff. Before, I wasn’t really happy with my music – it wasn’t really me, so now I’ve really progressed with my sound and I know what I want. Yeah, I’ve just been making new stuff and now I’m on my Earthshakes tour.

You’re well known for your striking appearance (notably your half shaven hairstyle) has your style changed since then?
Yeah! It has. Everybody started getting the half shaved thing and I was like ‘hmmm’ so I got rid of it. I’ve still got the same style but it’s like girly with an edge. I think I’m now embracing the girly bit more and I’m just being myself – just my own style. I think the shaved head made people think I was a bit hard and I’m not at all, I’m a soft person.

Remind us how your rise to music stardom began.
It started with Open Mic UK and then I ended up winning and one of the judges [Michael King] is now my manager. I just started putting videos out on YouTube and then I don’t know… I’ve just done so much; my diary is bigger than some of the biggest people in the UK. I’m so busy; I think I’ve just done it by working hard.


You previously cited Beyonce, Christina Aguilera, Amy Winehouse and Rihanna as musical influences and noted you take little something from each of them. Do you feel you’ve created a distinct Hatty Keane sound yet?
Yeah, I think when people see me or they hear me they know what I’m about. You can tell in my voice I’ve got certain influences but even the way I perform is my own style.


Your new single, No One Loves You, is out on October 22. Who produced the track and how much input did you have in writing the song?
It was produced by Si Hulbert. I was so happy when it came out and I had to perform it and stuff. We all sat down and batted round ideas. We spent a day working on the beat so I was like ‘they’re the features that I like.’ We went for a mysterious sound and obviously it’s got a massive drop.

The video for No One Loves You is simple in a sense but very engaging. Where was it shot?
We did it in Birmingham near the ‘spaghetti junction.’ It’s like loads of motorways and we did it underneath that. It was crazy [laughs] I had all my clothes on the floor and I had to wee in a bush. It was hot but the set was amazing for the video.


You keep your fans well and truly in the loop. Tell us about the video diary you keep on YouTube.
Oh God! I’m so funny with my video diary. I basically do it every time I’ve got a lot of stuff to talk about and every time I do it, I have to practice it because I always mess up. I always do the most embarrassing things ever and I have to do it again. I do it at least twice every time.


You’ve clocked up over 100 shows in just 12 months, supporting a vast list of industry elites. Is there one or two particular shows you enjoyed most?
I really liked the Ed Sheeran and Wretch 32 show and that was back in December [2011]. I did [The White Nights Festival] in Russia in July – that was just a crazy experience, the whole thing. I did Sundown Festival, which was really good. It’s just nice being in that environment with all the artists and they’re sort of always in the same circuit so hopefully I’ll be in that circuit.


How proud is your mum of your success since the days of you and her ‘just jamming in the car’ on the school run?
She just finds it surreal. We still do jam in the car, we make CDs of our favourite music and then sing along.


Flavour recently interviewed Lil Simz and she has features on two tracks from your EP, XVI. What did you think of her performance at Hackney Weekend?
Oh my God! She’s amazing, I love Lil Simz but she’s just cool. She’s so cool to talk to and I just really like her and obviously she’s amazing.

You’re both at such a young age, was it easy working together and can we expect any more Hatty and Simz collaborations?
Yeah, it was definitely easy. We’re both kind of know each other’s style and I think we go together quite well too. She’s got her swag and I’m like girly. I don’t know, it’s just cool. Yeah, I think we’ll work together again.


You previously told Flavour that your music ranges across a lot of genres and would make a good album. Can we look forward to another EP or an album soon?
At the moment I’ve got three other singles that I’m dying to get out as well as No One Loves You. They’re all kind of different, there’s definitely a chance of an album. I’m just going to see how No One Loves You goes and hopefully get it into the charts. I’ve heard you can kill a performance even if you miss soundcheck. Is this true?
I hate it when I miss soundcheck but I just kind of get myself in that mode. I make myself have my own soundcheck. Before I go on it’s normally really noisy but I just sing really loud and people look at me but I’m just like in my zone [laughs].

Which of your BGM comrades are you most excited to see perform at the Baby Girl Music showcase this Sunday [September 9]?
I think IP is performing, he’s new to BGM but he’s really good, I definitely think he’s going to be big – even my friends that have heard are like ‘oh my God! I love him.’


Your Earthshakes tour moves to Cardiff tonight [September 7], what do you have planned for the audience at Wow Bar?
I think I’m going to wear these cat ears. I’m performing at 1:45am so it’s going to be a late one. I’m going to do No One Loves You, one of my new songs, which I’m doing a video for next week, quite cheeky – it’s fun but quite cheeky.


What else can we expect from you in the coming months. Is there promotion planned for the new single?
Well it’s going on all the TV channel so it will be on like MTV, Box etc. The guy that’s doing the radio side of it basically took it and it became a hit.

HATTY KEANE ON THE SPOT:
Country you’d most love to conquer?
America

Which arena would you love to sell out?
Wembley

Artist you would most love to duet with?
Nicki Minaj

Out of all of your songs, which is your favourite?
No One Loves You or… I don’t know – I love them all.


Would you ever go blonde?
I was just talking about this the other day right because my mum’s blonde. As I get older I might, I think I will try it.


What your lucky number?
2