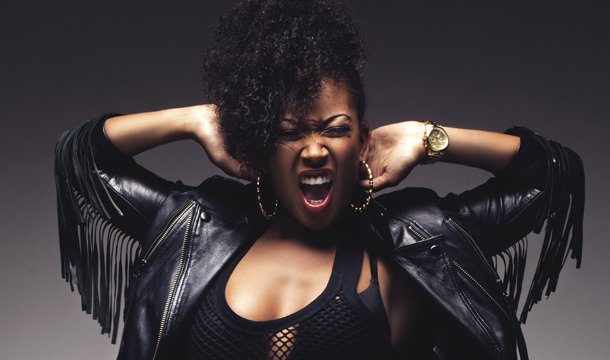 After first meeting Hayley Cassidy when she won the Flavourmag/New Skool Rules competition to perform at the New Skool Rules conference in Rotterdam, she has gone from strength-to-strength, going on tour and headlining her own sell-out show. We catch up with the 25-year-old rnb songstress to talk music, touring and where she would go if she had access to a time machine.

The last time we caught up with you was before you won our competition to go to New Skool Rules in Rotterdam. How was that trip?
You know what, I really enjoyed the trip – I found it so beneficial, more than I anticipated. And in addition to that, I met some great people who today I still keep in contact with. What have you been up to since then?
Since New Skool Rules I have been performing a lot, maybe 2-4 shows a month depending and really pushing Hayley Cassidy out as much as I could.

Tell us about the song and video Stripped?
Stripped is a song I wrote when I was in a place of needing to shake off some dead weight. I wanted to paint the analogy of being naked as when you are naked there are no layers, it’s just you. But without being too overt with it I decided on the idea of being stripped. The video idea came from me wanting to really bring the stripped concept to life with positive messages; I wanted it to almost be a declaration of strength and courage.

You recently had a hugely successful headline show which sold out! How was that experience for you and how was the preparation for it?
If I am honest, the show was amazing and turned out better than I had anticipated. Not only did we sell out, but with the amount of people wanting to pay on the door that couldn’t get in because we were actually over capacity, which is great for me. The vibe in the room and the energy I felt from everyone in the audience was crazy. It was electric. It was definitely a night to remember and a night for me and my team to be proud of.

Preparation was definitely stressful, but again myself and my team managed to pull it off to a standard that we were all happy with and I am more than grateful for everyone that helped or bought a ticket. Everyone made the night what it was.

You went on tour with Soul Acoustic. Tell me about that.
It was a 6 date tour organised by Punch Records; and they have been doing a lot. They also brought Angie Stone over recently and Eric Roberson who I was fortunate enough to open for also. The tour has been amazing, it has been me alongside 7 other amazing artist and all of us are performing acoustically.

Who or what inspires you?
Life inspires me. There’s so much inspiration and lessons to draw from life, so many different perspectives, viewpoints, opinions and so forth. Amongst the chaos we all face individually; I find the topic of life and living so intriguing and therefore draw a lot of inspiration from it.

What was the first record / CD you ever bought?
I think it was artful Dodger you know… you’re taking me back now. It was either them or one of Usher’s first album’s….I really don’t remember though.

What was the earliest historical fact(s) you learned that blew your mind?
That there are many countries and languages in the world. That really blew my mind as a child and has probably played a big part in why I travel so much now.

If you could make a documentary what kind of facts would you tackle?
This is an interesting question – I think I would do something on ignorance, behaviour patterns and mind sets; on what specifically I’m not sure. It would be interesting to understand how and why people formulate stereotypes and so forth.

When you were a child, what did you want to be when you grew up?
A psychologist or counsellor. Furthermore I wanted to work with kids, so I done a nursery placement and hated it so that never panned out.

If you could hop into a time machine you would request to go forward or backward to which year and once you arrived what the hell would you do there?
I would request to go forward. I wouldn’t want to go backward and change anything as I don’t live in regret and I don’t like to live in the ‘what if’ state. Everything thus far has happened for a reason and will probably help shape my future. So I would much prefer to go to my future, maybe 7 years forward and pick up from there. I know where I want to be and where I see myself being, it would be so freaky, yet interesting to see if I got there within the 7 years, and if I hadn’t – where I would be. I would love that! Can we build a time machine or nah?

What nerdy skill or hobby are you concealing?
I’m really good on Excel. I’m no excel queen but I do love to whip up a quick document in Microsoft excel. It helps me feel organised.

Creatively, what’s your next move?
I am working on a new project as we speak and really pushing myself. There are many sides to Hayley Cassidy and I am hoping that through this new material you will all see that more.

Name one thing you couldn’t leave your home without?
If I’m out for the day then I cannot be without my phone. No way.

What is your ideal super-power?
As a driver that clocks a lot of mileage, it’s easy to get tired – a lot of the time I wish that I can just transport myself by either flying or blinking and being at my destination; on time, no road rage, no stress.

In 5 years’ time where do you want to be and what would you like people to say about Hayley Cassidy?
In 5 years’ time I want to be a successful recording artist selling out arenas. I would love for people “that girl Hayley is so sick! I need to buy her album NOW”.