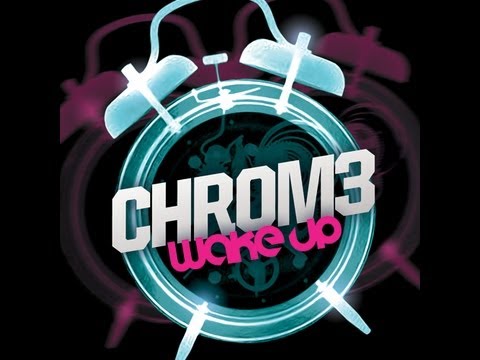 Growing up Chrome says he was never very stable, ‘I’ve lived in North, South, East and West, i’ve always been moving’, but now the 25 year old is ready to firmly root himself as a solo artist. Flavour was excited to find out more about the man behind the steely façade… A chance meeting and subsequent collaborations with Dizzee Rascal, after two years touring with the Newham Generals, allowed the singer to develop and showcase his talent.With his new single ‘Wake Up’ out now and big plans for his currently untitled debut album, on which Cause An Effect (Street Dance 3D) have produced many of the songs, Chrome is flying high…

Did you always want to be a singer?
If someone had told me ‘one day you will become a singer’, I would have told them they were lying.I used to be a basketball player then I got hit by a car, fractured my arm and it got really bad, so I had to give up. Eventually I started to go to church and play instruments, then one day they told me to jump in to do a rap, [laughing] soI started off as a rapper.

How did you meet Dizzee and get to feature on his #1 tracks Holiday and Dance Wiv Me?
I used to valet cars and I met a guy by the name of Footsie from the Newham Generals, I used to always say hello when he drove past me washing the cars outside. I didn’t know anything about grime music but we became friends and he told me one day he’d take me to the studio. Then six months to a year after that, he phoned and we went all the way to Lewisham, to the studio. In no time Dizzee walked through, I didn’t fully know who he was. After Dizzee saw the hard work and calibre was there, he was like ‘I’ve got this rap for you’ and that’s how we did Dance Wiv Me.

‘Ooh Now Baby’, that was your first solo release wasn’t it..?
It wasn’t an official single;we had the track, so I was like let’s put it out there, it’s not commercial, it won’t chart but my manager was like let’s makea video for it, so i did. This next oneWake Up, I think this is going to do really well.

The video is ‘Tron’ inspired; did you have a lot of input?
A little bit, the production Lemonade Money (BBC’s No Hats, No Trainers), are so talented. I wanted to stay away from the club theme, I’m a fan of Tron anyway and so the minute they showed me the first rough version, I wasreally impressed. They’re the same guys that did the video for Wake Up.

You’re currently in the studio recording your new album, what can we expect?
We’re looking to get some really cool people, we should be getting Benga on there, people like Ironik andI’m a big fan of Wiley. I’m a big fan of every single artist in the UK right now, Tempah, Tinchy, Chipmunk, N-Dubz; I’d love to make music with all of these guys.

Who inspires you?
God definitely,as long as I Wake Up every morning to see another day, I’m ok.I just want people to feel good, I try and make sure that whatever motivates me,it’s something upliftingto make somebody else feel the same.

Now that you’re stepping out on your own, how much control do you want?
Wow. Well I’ve always had freedom; you have to have control over your art. I’ve got a very strong team behind me; the only thing I think about is making good music. I don’t like to control nobody and I don’t want anyone to control me. I love everyone to feel comfortable,if I’m not comfortable, you won’t get a 100% out of me. I’m kind of scared of the word control [laughs].

Don’t be scared of it!

How did your first solo gig in London go, where you nervous?
I did a Christmas gig at Yoyo’s, Notting Hill Arts Club and the guy down there said they hadn’t had a show locked like that for a while and they’ve had a lot of big stars. I shut it down with my energy, the tracks were banging and I think a lot of people were shocked.

What do you do when you get some down time?
Basketball, running and I do a lot of reading. I just finished Julius Caesar, I’m kind of a fan of Shakespeare, and I’m reading about Africa.