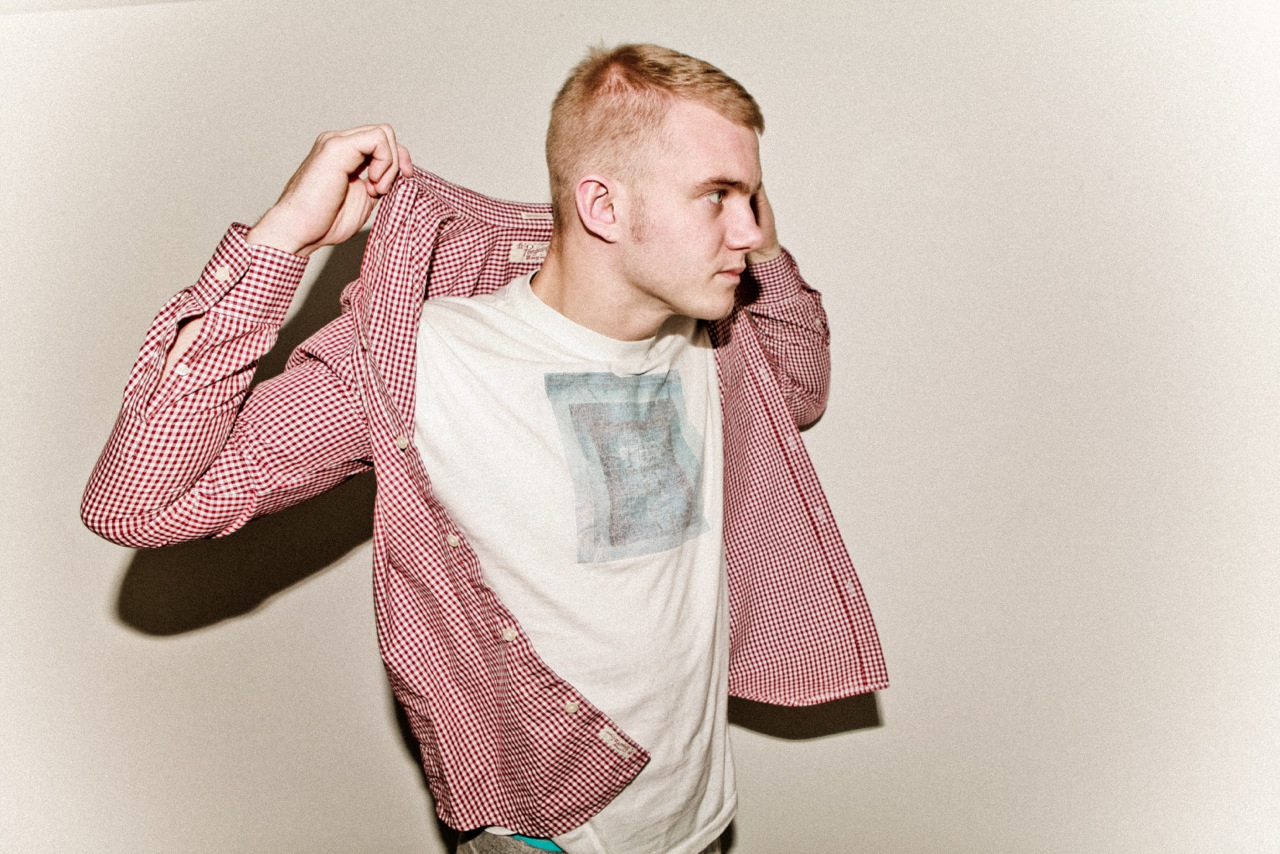 Ed Drewett raises the bar for modern—day pop. The songwriter—responsible for several chart-topping singles, including The Wanted’s ‘All Time Low,’ ‘Glad You Came,’ ‘Lighting,’ and, most recently, Olly Mur’s ‘Dear Darlin’ — has already conquered the UK charts. His ability to write catchy records is something that makes him standout, but the singer is after more than just commercial success — he wants to prove that there is life after tribulation.  “I’ve had it hard already in terms of being an artist – I’ve been dropped twice and I’ve been through a lot of s**t,” says Ed.

For many, it can be impossible to bounce back into the mainstream limelight, but Ed is one man on a mission. Several years ago he had a job carrying bricks. Today he’s an established name with impeccable chart credentials. We caught up with the infectious songster to talk dancing drunkenly to his own songs, why he’s a better drinker than Professor Green, and to find out what we can expect from his hotly anticipated debut album.

You’re only 24. How old were you when you wrote your first track?

I was about 12/13 and the song was called ‘Frisbee.’ I remember singing it to my friends in a park with most of the girls crying their eyes out, whilst my mates were loving it. In fact, it was the first song I really wrote properly from start to finish.

Were your parents as excited as you when they heard one of your songs on the radio for the first time?

I was actually stuck in traffic with my Dad the first time I heard ‘All Time Low’ on the radio. It came on Capital FM and we both just looked at each other and smiled. Mum and Dad have been really great from day one. They’ve always supported me in whatever I’ve wanted to do. They have never spoon fed me or anything as I have always had to work for whatever I want. I have had a great upbringing, and that puts me in a good position for keeping my feet on the ground, which I always try to do.

We have to talk about The Wanted. You wrote several songs for them, including their hit singles ‘All Time Low’ and ‘Glad You Came’.  Do you have any regrets about not keeping those records for yourself?

I have absolutely no regrets whatsoever. I don’t need to be in the limelight to enjoy the success of  certain things. I get just as much pleasure from hearing a song that I have written being played on the radio or when I’m alone in my car. As long as the artist appreciates it, which everyone has done so far, then I have no problem giving songs away.

A lot of females respond emtionally to songs you’ve helped penned for other artists. You’ve probably helped The Wanted and Olly Murs get laid?

Yeah potentially, but I think they were getting up to stuff long before I even came onto the scene. I appreciate you’re modesty. What would you be doing now, had it not been for that big break?

I think about this quite a lot and it’s another thing that helps me keep my feet on the ground. I remember going in and out of some really s**t jobs and doing 15 hour shifts in the car parks at Stansted airport with the raining pouring down. For a while, I also worked on a building site carrying bricks. I think I would be a pretty unhappy dude had I not got my break. I actually dread to think where I’d be.

Do you think you would have perhaps ended up on the streets?

I wouldn’t be in jail or anything like that, but I cannot imagine that I would have been able to concentrate on anything else other than music and writing songs. I am very lucky that I have fallen into the one career that will keep me occupied for the rest of my life. This is my dream, and I love doing it.

Have you ever danced drunkenly to any of your own songs?

I have literally danced drunk to pretty much every record, including my own at some point. I mean sometimes I get back from a night out I’ll lie in bed and play some of my tunes just to see how they make me feel. I think as an artist you’ve really got to know your music.

Your new single is called ‘Drunk Dial’. Is that something you tend to do in you free time?

I did use to always call my best mates up a lot and shout, ‘I love you,’ but over the past few years I’ve either got too drunk or ended up losing my phone. [Laughs] If you don’t want to drunk dial just get really drunk, and then you won’t be able to dial.

I think they are something everyone can relate to. Ideally, I would love for ‘Drunk Dial’ to go viral. A lot of my followers have been sending me some really funny drunken s**t.

If it’s a really bad one – loads of orange juice and ice. A freezing cold shower and my head dipped into the sink is another practice of mine. I can’t explain what it does, but it basically just deletes the hangover for the time while you’re in the shower. For an extreme hangover you need an extreme cure. Give it a go.

The first song that I did a few years ago, ‘Champagne Lemonade,’ I wrote a line that said – ‘Oh my god. Have you seen this goon? Love his wallet must be huge to bag a girl like you.’ I have written thousands of lines, but that that’s one of my favourite.

Do you get a lot of female attention?

I am probably not the person to say. There might be attention that goes on that I don’t know about or there might not be. I can’t really give you an accurate answer, but I’ve never struggled. I think that’s a good way to put it while being modest at the same time.

The attention that you do get from females, do they hope you’re going to write about them?

That’s a bloody good question. I think that’s something that I need to ask them, but I have written about the odd girl in my life. Though there have been a couple of times that I have done that, most of the time they don’t even know about it.

Could you match Professor Green drink for drink?

Absolutely. That’s an easy one. If Green’s with a girl he tends to chill out a bit.  I haven’t seen him in a while, but I don’t think Green’s drinking is consistent enough for him to have built up a great tolerance. I’m definitely an ASBO when I’m drunk.

Who is the most famous person you’ve partied with?

It has definitely got to be Elton John.I used to be on his management company, and he very kindly invited me to sit on his table at the Oscars, which was just great. I got to meet Smokey Robinson, Sharon Osbourne and loads of other people. I was basically there on my own, but it was f***ing brilliant. I got absolutely s**t faced and ended up taking some waitress back to the hotel…obviously, to just talk… [Laughs]

Did Sir Elton also get ridiculously sh*t faced with you?

I don’t think he drinks anymore, but after having dinner with him, I pretty much did my own thing. I walked around and mingled with some crazy A-Listers, half of which I can’t even remember. It was a pretty crazy night.

Is it true you’re friends with Pixie Lott?

Yeah, Pixie and I are good friends.

How did you two meet?

One of my ex-girlfriends did a lot of writing with Pixie when she first started her career. So, I obviously met Pixie through my girlfriend at the time. Since then she has been a big supporter of mine.

Your brand of music has huge chart appeal. Does that take the pressure off?

There is nothing certain in the industry. I’ve had it hard already in terms of being an artist – I’ve been dropped twice and I’ve been through a lot of s**t. The only pressure that is off me now is that I’ve experienced failure, I know how it feels.  So now I am just going to do it on my own and see how far I get, and to be fair I’m doing better than I’ve ever done at a label.

Your debut album has been four years in the making. How would you describe it?

I would say it’s literally a collection of thirteen of my favourite songs. To me, it’s as good as it can be.I’m absolutely over the moon with it. There are loads of other new stuff on their similar to ‘Drunk Dial,’ along with some more classic pop tunes and big stadium fillers. I have spent a lot of time on it, so I’m looking forward to people hearing the quality of it soon.