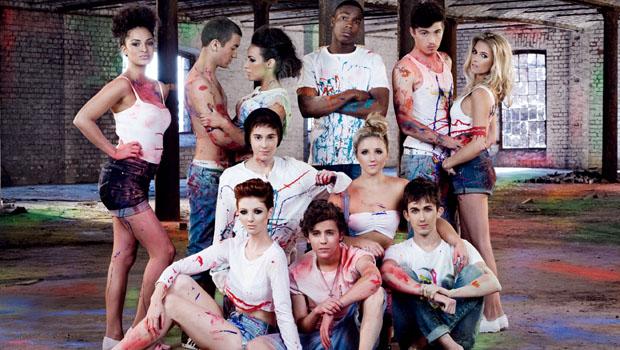 An influx of fresh-faced sixth-formers will be arriving in Hollyoaks this term, Flavour catches up with Tosin Cole and Jonny Clarke to find out what the lively duo have in store…

For South Londoner Tosin Cole (known for his role as Sol in EastEnders online spin-off E20), this will be his first television role. He is excited to be playing 17-year-old club bouncer Neil. ‘He is a lad that is a bit too confident.’ Jonny Clarke knows about that all too well. His ’Oaks on-screen persona Bart McQueen has been the centre of an ongoing love triangle, and now he’ll have a group of buddies moving to the village to boost his ego even further! The 19-year-old actors are both hoping to go into films to play darker characters. Jonny is set on the British film market, while Tosin sees himself doing his own stunts as an action movie lead.

How did you start acting?

Tosin: I used to act in school and college, but I never took it seriously. Then my friends invited me to a place called Intermission Youth Theatre.
Jonny: I fell into it to begin with, when my mum and dad shoved me into Stagecoach. My sister did it, so I went there for a taster day. I was playing football, and when I was about 11 I had to choose. Ever since then I’ve always wanted to be a film star.
Tosin: I wanted to be an investment banker [laughs], and then I changed and wanted to be a drama teacher.

Tell us about your new character, what’s he like?

Well, originally I auditioned for the role of Jonno (played by Dylan Llewellyn), but I didn’t get the part. Then they gave me a call for Neil. I had to do like five or six auditions; it was really hard but fun. [Neil] pretends to be someone that he really isn’t, he has no game.

It’s amazing. I never thought my character would ever become this big; they’ve built a group around Bart. I relate to him when I was about 15, but now I’ve grown up. I don’t think I have the confidence that he does, though [laughs].

What’s it like being a member of the McQueen clan?

Jonny: As an actor, they are crazy. I can’t get a word in; it’s like having three sisters. Bart probably gets annoyed because he’s forced to get involved with their girly ways.
Tosin: I would like to do some work with the McQueen’s…

Speaking of hot tottie… which of the Hollyoaks ladies do you think your character Neil might have his eye on?
To be honest, I don’t know. I am quite intrigued to see who it is.

And as Tosin?
No, I keep it very professional.

Hmm, what about celeb pin-ups?

Where do you think you fellas fit on the hot-o-metre?

Tosin: I get called cute on the street, but I’m a man now, I want to be called sexy or have people say, ‘Oh my gosh, he’s so fit!’ [Laughs]
Jonny: I don’t feel like I have the body other people have on this show. I have never seen the inside of a gym, it just bores me. I’m like, yeah, I’m gonna hit the club. Rob Norbury (who plays Riley Costello), he’s mad on it [laughs].

So the new term starts soon, what were your favourite subjects at school?

Jonny: I was so terrible in school: I used to say to my parents, ‘Don’t worry, I’ll be an actor.’ I didn’t like any subject at all, apart from drama.
Tosin: For me secondary school was the best time of my life. I enjoyed drama, and music was like my favourite lesson, I played the drums.

What’s playing on your iPod at the moment?

Lastly, lads, what’s the craziest thing a fan has ever said or done to you?

Jonny: A lot of people say they’ve had dreams about me… I daren’t ask!
Tosin: The funniest one was when some women said, ‘You remind me of this guy that used to…’ So I said, ‘Oh, is it the guy off E20? Everyone thinks I look like him.’ Then when I walked off she screamed, ‘Oh, my God, it’s you!’ [Laughs]