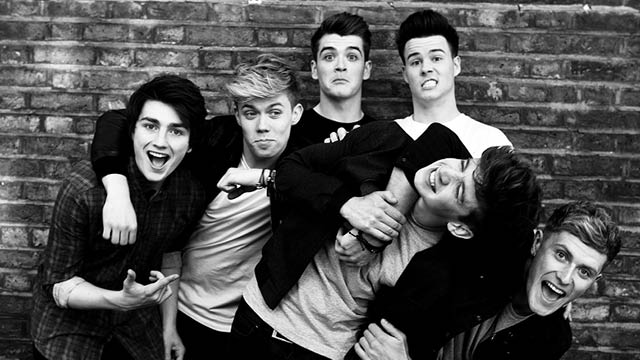 On a sunny Saturday afternoon, I sat down with Hometown band members Dayl, Josh, Cian, Dean, Ryan and Brendan in an East London hotel.

If you haven’t heard of HomeTown, you’ve definitely been missing out! HomeTown are an all-Irish boyband formed by Louis Walsh in 2014 and since then have been hitting the UK with their mega talent. The lads are currently on tour with The Vamps and cannot wait to do their own headline tour.

So you guys were put together in 2014 as HomeTown after some tough auditions, can you tell me about it?

Josh- it was tough, really tough! Both really long and it just started out with a thousand lads and it eventually got narrowed down to the final six. It took a while but we got there in the end.

Having Louis Walsh as your manager, do you find it difficult after his success with his bands, such as Boyzone and Westlife?

Ryan- yes definitely, it’s frightening to kind of follow up after Westlife but we’re going to give it a good shot.

You had the fastest selling single with ‘Where I Belong’ from a debut act, then it hit number 1 in Ireland, What was going through your head?

Dean- we didn’t expect it at all, we didn’t even think that would happen. It was our first bit of music and we were dying to tell people what we’re about and what we were doing. It’s not your typical boyband song; it was kind of a sing- along and everyone got into it! It went really well for us.

Your album, which was released last year, was well received; do you feel under pressure to live up to the success of that?

Dean- we enjoy singing it live, we picked all the songs on the album ourselves and we obviously had help from Louis but we love all the songs we sing especially ‘The Night We Met’ that Liam Payne wrote for us! It was amazing for us because we’re big 1D fans especially Cian over here; he loves them.

What’s Louis Walsh really like? Is he a big softie like we see on TV or is he a secret Simon Cowell?

Cian- mixture of both

Ryan- or if he’s had any sleep; he’s a night person really! He doesn’t really talk during the day; early in the morning is kind of hard to get in touch with him.

Ryan- yeah it’s like Louis peak of the day.

What was it like working with Jamie Scott and Liam Payne?

Ryan- it was amazing, we recorded our song in Jamie’s house, which was unbelievable, and he’s got a little studio in his garden like in his actual garden

Dean- you’re making it sound like just a shed

Ryan- No it’s in a room but it’s like a really nice hangout spot and Jamie is really cool to work with.

Dean- it changes all the time, we all put our hands in and say something.

If you guys weren’t in a band, what would you be doing now?

Dean- trying to get into a band

Ryan- I would of graduated from college and I probably would still be working in a grocery store.

Dayl – I would probably be dancing somewhere

Josh – having a cake

If you could collaborate with any band or artist who would it be?

What’s it actually like living together; do you get fed up of each other?

Ryan- for the first couple of weeks we did, heads clashed and you know

Josh- then we just sorted it out

Ryan- and then we were all very happy!

Who has the worst habits in the band?

Cian- ooh this is hard

Dean- it really depends on what habits or what others consider bad habits, leaving rotten bananas around or not picking up dirty washing, Dayl has the worst habits

Dayl- that was one time!

Ryan- yeah one time but still!

Weirdest present from a fan?

Dean- we were a five piece and then we gained a friend so Josh is weirdest present we’ve received.

Ryan- they’ve got one lens

Cian- oh my god, I didn’t even notice. What goes on in the dressing room before a show?

Ryan- yesterday Cian was watching big bang theory while I walked around the room playing a guitar, Dayl danced, Dean slouched on the sofa for a bit and Brendan and Josh just watched The Walking Dead

Dayl – it varies depending on what mood we’re in

Cian- we actually didn’t do much yesterday.

Dayl- someone will have a lucozade and then it’s game over, we just go mad

Who gets the most attention from fans?

Dayl- Josh for his amazing physique

Ryan – Josh and Brendan! Josh for his aesthetics and Brendan for his amazing vocal ability

Cian- Josh off stage and Brendan on stage

Ryan- Great! They are very cool; Cian had a good time with them once! We are delighted to be on tour with them! They are really fun guys and they are a similar age to us so we get along well!

Cian- they are good at bowling

What are your plans for the next few months?

Dean- we will also be in the studio recording!

Ryan- mine changes all the time so this question is hard

Dayl – Selena Gomez and Ariana Grande, she is something else.

Dean- mine actually changes; it depends on what comes up on instagram

Ryan- Jennifer Lawrence, I would love to hang out with her!

What’s one thing you miss about home when on tour?

Josh- my sister and my dog

What’s the most memorable moment on tour?

Josh- Dublin was amazing for because obviously we’ve played there a few times and it was a great reception for us there.

Ryan – I’ve had plenty! The worst is when your voice cracks, it can happen at anytime and you won’t be expecting it! When it happens you just want to leave the stage because it’s so embarrassing

Cian- I fell off the stage once

Ryan- Josh stepped on my shoe once and it came off and Cian jumped on my back and let go, he just fell back.

Dean – One of mine was to go to South Africa and meet a lion, we done that.

Ryan- As a band, it’s to tour the UK and the US! We’d also love to have a number one album

If you could be any other member of HomeTown, who would you be and why?

Dean- Brendan because of his unbelievable voice and he’s a man for the ladies – He’s a lady for the men and that no joke!

One Direction or 5 Seconds of Summer?

Dean – this is really hard but Cian is the best one to answer this!

Cian- I would choose 1D and the whole band knows it.

You can catch HomeTown at The Vamps remaining tour dates.

What do you think of the interview? Leave your comments below