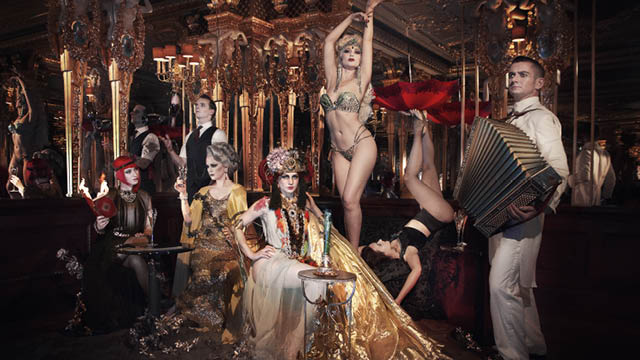 Hotel Black Cat is a place of distinctly old world glamour. There is magic to be discovered behind each closed door, yet danger and madness lurking behind every potted palm. Step over the threshold into a bohemian melée of prima ballerinas, daredevil acrobats, miraculous musicians, a wayward heiress and a former cartoonist now transformed into his own greatest creation. Enjoying an unrivalled international pedigree, Black Cat Cabaret has been an integral part of the London cabaret scene since 2012. With a mission to create ground-breaking, high-end theatrical spectaculars inspired by dark and daring Parisian cabaret culture with a decidedly modern twist, they blasted in with a year long sell out run at Cafe de Paris from 2012 to 2013.

Hotel Black Cat at the London Wonderground
1 of 9

Early 2014 saw a pop-up run sell-out run at the mysterious vaults of St Pancras’ Grand Hall, followed by smash hit runs at Underbelly’s London Wonderground at The Southbank Centre in 2014 and 2015. The company has also enjoyed a 2-year residency at the historic Hotel Cafe Royal in the heart of the glamorous West End, hosting a twice-weekly dinner show – Salon des Artistes.