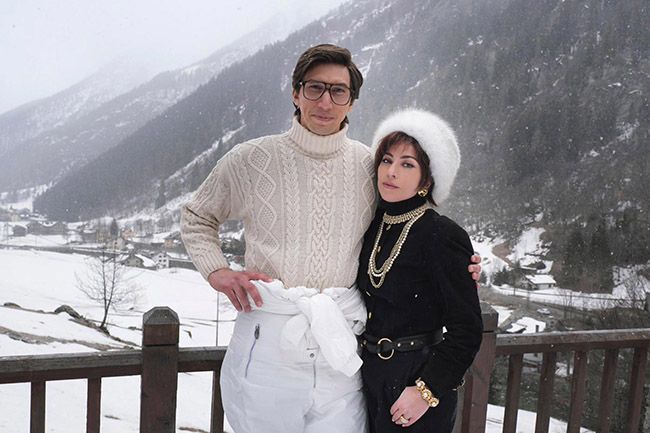 This time he catapults forward in time to tell the rise and fall of the fashion House of Gucci through the eyes of Patrizia Reggiani, played by Lady Gaga, the wife of the grandson of the Gucci founder and subsequent murderess. Gaga is truly the star of this period runway with her Italian roots firm in the picture. She brings the ruthlessly ambitious and hard done by Patrizia to life.

The film starts by introducing Patrizia as a young, vicious woman. Turning the male gaze upon herself as she waltz’s through the truck yard of her Father’s business. Skip forward to the obvious meet-cute, Patrizia meets the rather geeky looking Maurizio Gucci (Adam Driver) – at the time studying Law and wanting nothing to do with the family business – at a party when she mistakenly thinks he is a barman and he makes her a cocktail.  Practically stalking him, Patrizia charms her way into his heart and the calculated rise to Gucci power commences.

As we witness the Bond between Patrizia and Maurizio grow stronger through Marriage, family disownment and Patrizia’s foresight into manipulating Maurizio into being more involved in the family company, the couple seems to become inseparable. However, Patrizia has planted that seed of success, following quickly behind by greed, into the newly molded Maurizio. Turning his turn his back on his wife to start an affair with an old flame, and the following divorce request is the straw that breaks the camel’s back, not only does Patrizia want what she helped build but ultimately revenge with the murder of Maurizio.

Now, when you think of Italians, you think of passion and fiery temperaments. Considering the fallouts and clashes this Gucci family had, most are delivered with less pizzazz than a wet fish. The gold-digging argument between Driver’s Maurizo and his ex-movie star father Rodolfo (Jeremy Irons) feels too apologetically feeble to carry any weight in Maurizo’s subsequent disownment from his Father. Wannabe designer and Maurizo’s idiotic cousin Paolo, played by a heavily disguised prosthetics Jared Leto, bumbles from scene to scene taking the constant kicks in the stomach laid on him by his own family. In true Leto style played with exaggerated prowess that justifies constant belittling from audiences and critics alike. The only real sense of believability comes from not only Gaga’s Patrizia but the head of the House of Gucci and crook Aldo played by an Al Pacino. Pacino channels his inner Michael Corleone when he finds out his son Paolo, has sold their share of the business.

With this coming in at over 2 hours and 40 minutes long, this feels overly long but lacks any great detail. Something always feels missing but never being able to pinpoint that something. Having said that, through all its glaring faults, there is something rather enjoyable and entertaining of this crazy retelling and if A Star Is Born wasn’t enough to cement Lady Gaga firmly as a superb actress, House of Gucci surely will. Now sashay away, darling.