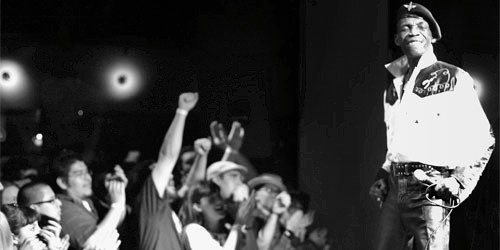 Forty-three years ago, ‘Israelites,’ became the first reggae number-one single  to top the UK charts. Noel Phillips looks back at how the music and genre conquered Britain.

It was the late Desmond Dekker who pioneered the sounds of Jamaican reggae and ska into Britain. It was his 1969 hit, ‘Israelites,’ which according to many quickly established the British reggae genre. In the wake of his success in the 1970s came a host of others, and it wasn’t long before Bob Marley followed with a hefty musical imprint not just in Britain, but also around the world.

Anyone old enough will remember the sheer energy in Dekker’s voice, the big walking bassline in ska and its immediate racket that would grab hold of a crowd. Likewise for those who have never experienced its bearing will undoubtedly have encountered its influence.

Following the formation of ska, Dekker is said to have been responsible for its export making him Jamaica’s first international reggae superstar and the ‘face of rock steady in the U.K.’ On the other side of the pond, 3,000 miles away, the Jamaican film ‘The Harder They Come’, starring Jimmy Cliff, unveiled the status of reggae music in the United States.

Whilst growing up reggae was forever present in my childhood home, my father Echo Minott, is a well-established musician. He is accredited as one the first to introduce raggamuffin into Jamaica and the rest of the world. In 1985, he achieved international prominence with his number one chart hit ‘Lazy Body.’

He recalls: “It was the most unforgettable moment for me. My songs were everywhere and everyone was singing the lyrics.” A year later, the release of ‘What The Hell The Police Can Do’, propelled him further into stardom.

It remained at number one for three whole months: “Lazy Body was one of the first to ever use the raggamuffin beat which many dancehall artists use today. It was crazy finding out that I had another number one. I remember  receiving the news  in Heathrow airport.” My dad and I are still talking about music. When we recently spoke through Skype, we discussed the late Dennis Brown and the ‘Cool Ruler’, Gregory Isaacs.

Both Brown and Isaacs were two very successful reggae heavyweights. Isaacs currently sits ahead as ‘The don’ of lover’s rock.  He was a very dear friend to my dad: “He was one of the kindest and most genuine singers. You will never find another performer like him.”

Following a long battle with lung cancer, Isaacs who passed away in 2010 is now firmly documented, as one of several who injected Britain with reggae. By the early 70s, reggae was now being played almost everywhere. Britain was now embracing the culture. Hailed as ‘The Crown Prince of Reggae’ for his silky voice, Dennis Brown was also seen as a leading figure.

He’s breakthrough hit ‘Money In My Pocket’, saw him accumulate international significance in reggae. Brown, another close friend of my father would often perform alongside him, and at times converse about his career. “Before he died, we would always get together for a drink. One of my best memories was performing with him in England. He was a true star and a great friend.” Brown’s untimely death in 1999 sent shockwaves through the reggae world.

In 1973, a teenage Rastafarian young boy from the depths of Trench town, named Robert Nesta Marley and his band The Wailers, took reggae music to another height. Though, Marley is substantiated as helping to widen Jamaican music to a worldwide audience.

Desmond Dekker remains ahead in terms of introducing reggae to the masses here in Britain. After all, he was the first reggae artist to have gained a number one from the island of Jamaica. On the other hand, Bob Marley has left us with an immeasurable collection of mesmerising hits which will forever gratify the hearts and minds for generations to come.

The legendary DJ, Sir David Rodigan, is one man with a significant knowledge on everything relating to Reggae. He’s infatuation for the genre has led the way for the success of reggae music in Britain. He was recently given a knighthood for his services. In 1980, Rodigan had an infamous encounter with Bob Marley within the offices at Island Records.

“I was walking up the stairs and he was walking down, I couldn’t believe it as no one knew he was in the country,” Rodigan recalls on the historic meeting.  The following Saturday, on his ‘Roots, Rockers’ show on Capitol Radio Rodigan conducted what is now a monumental one hour-long interview.

“I was extremely nervous being in his presence but It was very special as you can imagine. He was and still is a real icon not just for reggae music lovers, but for the public at large who look unto him as being an icon in the way The Beatles, The Stones and Jimi Hendrix are also icons. He was very down to earth and relaxed,” said Rodgian.

For over four decades, Sir Rodigan has witnessed the highs and lows surrounding reggae, not to mention Millie Small’s remarkable entry into the international pop market with ‘My Boy Lollipop.’ Even so, what remains his glittering moment to date was in actual fact hearing reggae being played for the first time in Britain.

There were many musicians who were also gripped by the influence of reggae. UB40 were one of several who notably hopped onto the 1960s ska and early lover’s rock movement. Their innovative approach in covering many Jamaican hits brought them international success.

These days, reggae can still be heard in clubs, at festivals and to a limited degree in the charts. In 2010, reggae singer Gyptian followed in the footsteps of Sean Paul and Shaggy by cracking the UK singles chart with his summer hit ‘Hold Yuh.’ Achieving this was not simple taking into account the rapid decline of the genre in Britain.

Gyptian, real name Windel Edwards echoes the sentiment of being inspired by artists such as Marley and Dekker, “It all started off from ska. It was Bob Marley, The Wailers and others like Dekker who originated the genre. Reggae music is like the father for anything that comes from Jamaica, it is real and authentic.”

Following its invasion, it was accepted that reggae music would eventually find its own identity in Britain. The biggest shock is how swiftly this transpired. With the current status of dancehall and the subsequent new wave of bashment, reggae should be acknowledged for paving the way. But with the genre now being marginalised – Mavado and Vybz Kartel are a few among the catalogue of artists prolonging this new wave of dancehall.

In our time, we’ve seen a number of musicians such as Snoop Dogg incorporating the style into their music, and it was no secret that the late Amy Winehouse had a thing for ska. Nonetheless, the influence of ska and reggae may no longer be prevailing as once before, but the current generation of artists are clearly continuing to evolve from the legacy passed down by their great luminaries.