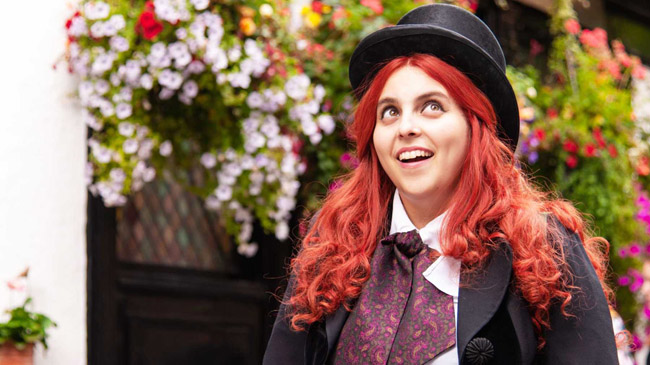 Caitlin Moran’s witty wordsmith wonder unleashes a whirlwind of ambitious thunder in Beanie Feldstein with a joyful trip to the 90s’ sticking one finger up at sexist journalistic practices.

Another of Caitlin Moran’s wordsmith wonders finds itself adapted in the name of Entertainment, at times semi-autobiographical, Beanie Feldstein’s Johanna takes a step into the 90s’ to unshackle the chains of her working-class nerdy nice girl to unleash a whirlwind of ambitious thunder on her journey to find out who she really is.

Based on Moran’s book, the coming-of-age story follows Johanna, a sixteen-year-old girl from Wolverhampton full of dreams of becoming a writer. The only girl amongst four brothers, her family is rounded off with a post-natal depressed Mother and a failed musician of a Father (Paddy Considine) who still dreams of making it big. On a daily basis, she speaks to the wall of icons she has plastered on her bedroom wall that include Elizabeth Taylor, Sigmund Freud, Sylvia Plath, Karl Marx and Julie Andrews, all of which come alive and give her words of wisdom and all played by a plethora of famous faces.

Aesthetically reminiscent of Todd Haynes Velvet Goldmine which followed Christian Bale’s Glam Rock journalist, the plot is immersed amongst the 90’s indie rock scene. After winning a competition with an insightful and witty review of the Annie soundtrack, Johanna manages to bag herself a job at the prestigious DME magazine – the leading rock mag in the music industry. Having to traverse the sexism rife in a male-oriented office, Johanna reinvents herself into Dolly Wilde, a red-headed, top-hat wearing, fiery no-nonsense and ascorbic journalist whose appearance is adjacent to that of a circus master.

As Feldstein delves into an exceptionally portrayed accent, she flawlessly switches between the nice girl she once was to the dark and foulmouthed success she’s become at the flip of a switch and of course this has repercussions for all those around her that love her including a callous verbal attack on her own Father. Feldstein’s previous outings in films such as Lady Bird and Booksmart have already proved she’s a force to be reckoned with in her deliverance of articulate comedy. Moran’s wonderfully cutting witty-one liners take on a vicious life of their own as they trip out of Feldstein’s mouth.

A feel-good and exceptionally fun movie, Moran’s joyful words and Coky Giedroyc direction work hand in hand in unearthing a (still) heavily male-orientated journalistic world. Pairing that with one girl’s fiery ambition to do whatever it takes to blow those climbing blocks down without preaching it to annoyance is a stone-cold winner.