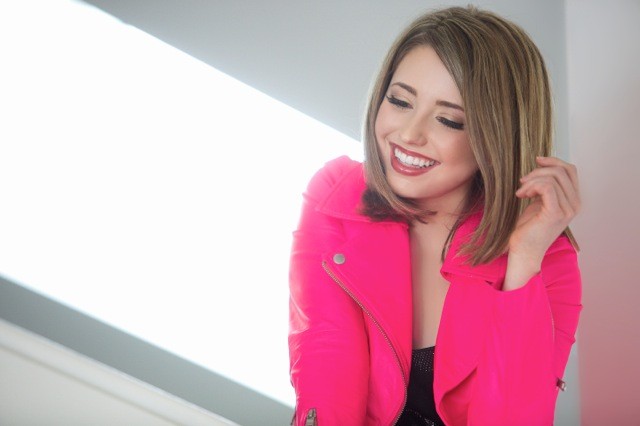 Hailey Rowe started recording original music and had the opportunity to work with producers including Anthony Krizan/Sonic Boom Studios (The Spin Doctors), Pete Masitti/West End Studios (Hootie & The Blowfish, Enrique Iglesias and Shakira) and Eddie Galan of Mach 1 (High School Musical album). She sang at the White House Christmas Party in 2010 and at the Pope’s Summer Palace in 2011.

Earlier this year, the 20 year old singer/songwriter took to Youtube and released her first ever video for the song “My Boyfriend Is Gay”. The video which stars a plethora of faces from reality TV, has gotten tongues wagging and jaws flapping. “My Boyfriend Is Gay” has also garnered the attention of Grammy-winning producers behind the FUN (We Are Young) album.

The new single “Don’t Need Your Approval” is produced by Pete Masitti of West End Studios and is accompanied by a clever video displaying the faces of many different people. Hailey sings her anthem of rebellion and tolerance, explaining his she can be anything she wants to be. Independence is an important message for people of all ages and “Don’t Need Your Approval” is this talented artist’s way of crafting her inner emotions.

We spoke with Hailey and ask her questions on how to date her, we hope your taking notes. What’s your ideal first date?
Trying a trendy, healthy restaurant. Pretty much anything having to do with health or fitness is the way to my heart. Also, going to a comedy show. 😉

What are the things you shouldn’t talk about on a first date?
Disturbing bodily functions…?

Who is the last person on earth, you would go on a date with?
I don’t want to name names, but there is someone who relentlessly will not stop contacting me on ALL forms of social media (cell, Facebook, Twitter, etc.) and does not get the hint. Desperation is not attractive.

On a bad date, whats your exit strategy?
ED… explosive diarrhea. Luckily, I’ve never had to use this excuse.

Do girls really kiss and tell?
Only the girls who feel that it’s really important to tell others that guys are all over them… Or if you’re having a fun girls’ night and dishing is encouraged!

Girls say a lot of sentences that men do not understand, can you translate these for us?
Sure!

“I wish it could’ve worked between us.”
You’re a really nice guy, so I’m trying to let you down easy.

“I need to focus on my career.”
Okay, this one is actually truthful for me.

“I’m not ready for a relationship right now.”
I’m having too much fun being a homebody, not having to put on make-up, and watching “Sabrina” reruns in my bed… I’d like to keep it that way.

“You want more than I’m prepared to give.”
Sorry! Not that type of girl!

“My feelings for you are too strong.”
I’m scared of commitment.