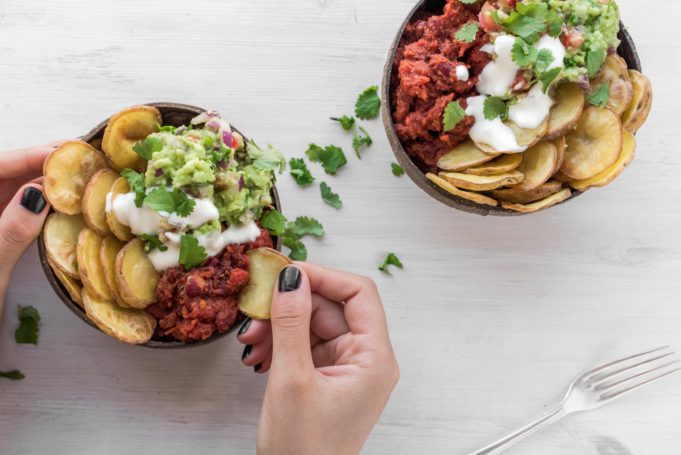 Dinner parties can be a really fun way to stay social, but they always run the risk of excluding vegans, vegetarians or people with certain diets.

Rather than cooking separately for your vegan guests, which can make them feel singled out from the group, why not create your very own all-vegan party? Here’s a quick, easy guide on how to throw a vegan dinner party in the comfort of your own home while contributing to stop animal cruelty in the food industry.

How to tell your guests

A dinner party can be a good way of introducing them to ‘real’ vegan foods, rather than the stereotypical salads and rice most people think of, but that shouldn’t be a reason to lie about what you’re serving them. Be upfront and honest once imitation meat gets brought to the table.

Not everybody likes the idea of a starter course, but it gives you a great way to introduce some appealing vegan food. Don’t break out the meat alternatives just yet – stick to things like salsa and hummus dips, or a simple salad, to set the mood and keep guests satisfied. Anything heavy or filling, like potato salad, might be a bit too much for some partygoers, so keep them optional if you can.

Starters aren’t always a great idea, so don’t be afraid to skip them if you want to focus more on the main meal – a few extra minutes can make a big difference in the taste and consistency of what you’ve cooked.

Whether they’re before, after or during the main meal, a salad is only as good as the sum of its parts. Throw in some variety with roasted nuts, seasonal berries and fruit, a tasty dressing and plenty of healthy greens – the more you can add, the better.

Alternative meat will usually be the bulk of your party food, so it’s vital that you choose a type that can leave both vegans and non-vegans satisfied. There are dozens of easy-to-find meat alternatives that all offer a slightly different taste: beans and potatoes are the easiest to pull off, but you can try jackfruit, eggplant, mushrooms, tofu, soya protein meat and plenty of other substitute foods.

Make sure you try each of them before deciding which to cook, though: non-vegan partygoers will want something that’s as thick and tasty as meat, whereas long-time vegans might prefer a less hefty choice. Either find a balance between the two or try serving both at once. Your guests will appreciate the effort either way.

When it comes to planning a meal, the drinks are just as important as the food. If you’re thinking of drinking during the night, choose a vegan-friendly brand of alcohol and pick your drink accessories carefully.

The end of the party should be just like any other, so be sure to get some feedback from your non-vegan guests. It’s almost certain that they’ll have opinions on the non-meat food that you can use to prepare for your next dinner party, but you could give them a little gift bag of other vegan food for them to try ahead of time.

Don’t forget to include some regular gifts to balance it out, though! Something small, like the range of gin gifts by Popaball, can show them that vegan limits aren’t such a big deal.