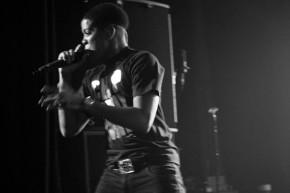 The energy at Shepherds Bush Empire was absolutely crazy. 2000 eager boys and girls (and even excited mums) were given a chance to see their favourite young music stars up close. Three balconies and a floor of screaming teens crammed into the venue ready for a stunning show of lights, levels and lyrics. Support from Tenny Ten, Skeppy, Daisy Dares You and Tinie Tempah was more than enough to fill the gap of anticipation before Chipmunk sent his loyal fans into a certafied frenzy.

Hands waved, phone’s lit and screams rippled through the air as he brought on N-Dubz to perform Defeat You. Oopsy Daisy, Chip Diddy Chip and Look For Me completely blew the roof off the Empire! The aftershow party buzzed excitedly as the performing artists celebrated at the private bar with Wretch 32, Princess Nyah and a small number of (lucky) fans until the early hours.