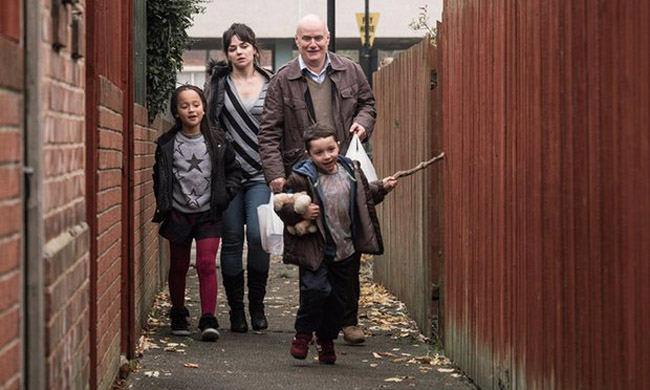 It’s not very often we are treated to a cinematic story that hits so close home. I, Daniel Blake hammer’s the nail right on the head off frustration with a fictional tale of one man being screwed over by the state with grim and anger inducing consequences.

I, Daniel Blake – Which won this year’s Palme d’Or at the Cannes Film Festival – comes to us from the socialist mind of director Ken Roach – a director widely known for his socialist ideals who features poverty extremely heavily in his films. Although fictional, in-depth research was undertaken to portray a story that many will try to brush under the carpet, one in which people do not want to admit is happening in a country which is supposed to be in the midst of a wealthy period. A country which, in the 21st century sees’s people queuing around the block at food banks to try and feed their hunger and that of their families.

Daniel Blake (Dave Johns) is a proud man, a carpenter by trade who has suffered a heart attack and has been written off work. His only form of income was his sickness benefit, but after completing a questionnaire these benefits are stopped as he his deemed fit to work. His only other option is to claim for jobseekers allowance although he has no intent on finding a job while he has been written off by the Doctors.  His frustrations start when all the form filling has to be completed online – but Daniel isn’t computer friendly – with the cold grey offices of the job centre – which are full of jobsworths – he just seems to be going round in circles until the ‘decision maker’ gives him a date for his appeal – which is a hell of a long time coming.

With an arousing passion for its subject, I, Daniel Blake is broken up with a subtle sense of humour as Daniel tries to mask his stress-fuelled frustrations. He befriends Katie  (Hayley Squires) – a young single mother of two who has been re-housed from London to the Northern part of the country – as she struggles to put food on the table for her kids in a dilapidated flat, Daniel acts like a father figure who fixes up the flat to make the best of a bad situation. In one gut-wrenchingly unwatchable scene in a food bank, Katie completely loses her dignity as hunger overcomes her. We defy anyone not to feel her suffering with an outpouring of tears. Her situation becomes so bad the only way she thinks she can fix it is to become an Escort.

This isn’t a film with a feel good happy ending – the ending is one thing you will see coming a mile away – this, however, doesn’t take away from the tremendous performances from our actors, Dave Johns and Hayley Squires and the powerfully brutal subject. If there was any a film to make you want to get up off your backsides to help those less fortunate than yourselves, I, Daniel Blake is it.

I, Daniel Blake is out in cinemas October 21st.