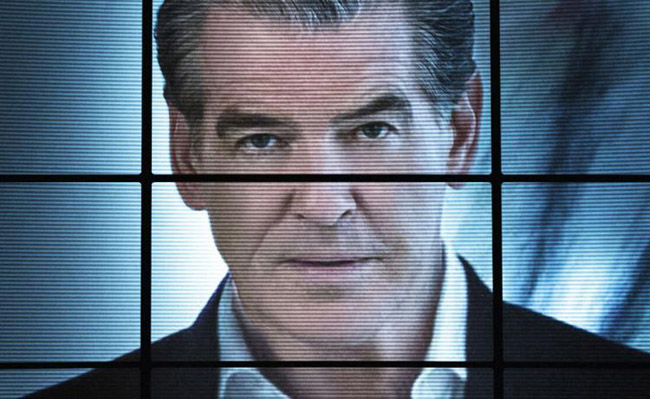 In a world that’s just seen a third series of technology horror anthology Black Mirror, it’s impossible not to compare thrillers with the same theme to the standard which the show has created, which is a test Pierce Brosnan-starring film I.T.  must also face.

Despite the challenging circumstances, I.T is overall a surprisingly worthy action-thriller centred around the idea of an invasion of privacy. The film reaches a duly earned level of terror and tension with a compelling antagonist to put Brosnan through the paces.

Brosnan plays aviator tycoon Mike Regan who takes a shining to IT technician Ed (James Frecheville) after he saves him from a business pitch going awry. Technologically inept, he invites Ed to fix their home internet issues, allowing the young man into his ‘smart-home’ and his private life, involving his daughter Kaitlyn (Stefanie Scott). It’s from here Mike and his family experience increasingly inappropriate behaviour from Ed, which each time is confronted too only makes Ed more sociopathic and dangerous.

Any film with Bond star number five is anticipated to be a cheese-fest. I.T. though is actually startlingly cool; for the most part. Unfortunately, while Brosnan’s character isn’t cringe-inducing, he’s left with an accumulation of agonisingly basic lines, with ‘what does that/you mean’ being the prevalent phrase, indicating that despite being CEO of a tech venture business, he doesn’t know how to work a Powerpoint. Unfortunately, even though Mike’s character isn’t terrible, he’s no more than a technophobic man (understandably) who wants to protect his family. If it were not for the unpredictability of Ed, this film would have very little intrigue.

What’s interesting about Ed is not quite knowing whether he’s a well-written character or not. His downright creepy actions and frosty persona are uncomfortable to watch, but in fact isn’t that exactly the kind of feeling a character like him is supposed to evoke?

I.T.’s cinematography suits its themes: sleek, cold, and spacious. It adds a sense of discomfort and detachment to any kind of safe surroundings, building on on the slow-burning suspense, the pace perfect for a good level of both intrigue and dread. While the acting was not outstanding, they at least allowed for the ability to understand these characters and have any idea of what they were going through. It seems that perhaps TV has spoilt us with rich characterisation and the absence of time to explore is to blame for these disappointing feats. But it’s more likely that a lot of corners are cut in favour of story or style, at least in the better ones.

Despite a smattering of hammy lines and a deficiency in decent character depth, though, I.T. actually brings a lot more to the table than expected. While not quite qualifying for the big leagues, the film at least provides an intriguing premise, a convincing villain and effective tension-building.