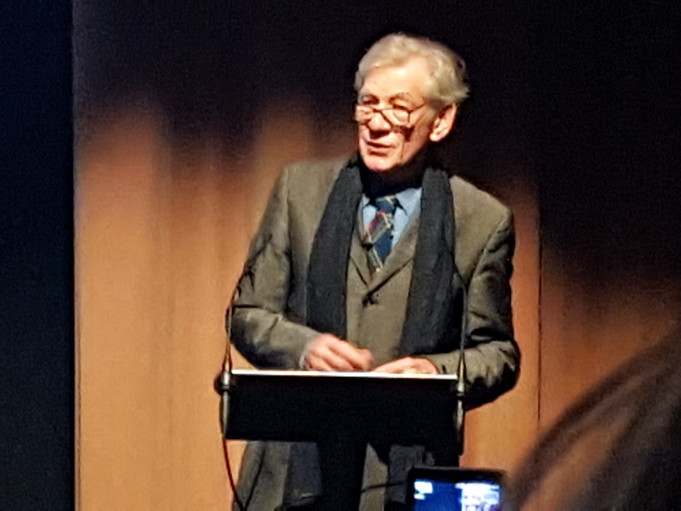 Today saw Iconic Actor, Sir Ian McKellen launch the BFI Presents Shakespeare Season, a project in which he is spearheading.

As the world celebrates Shakespeare 400 years after his death, the BFI, the British Council and Ian McKellen today unveiled BFI Presents Shakespeare on Film. With no other writer impacting so greatly on cinema, this programme explores on an epic scale how filmmakers have adapted, been inspired by and interpreted Shakespeare’s work for the big screen. It incorporates screenings and events at BFI Southbank (April-May) and UK-wide, newly digitised content on BFI Player, new DVD/Blu-ray releases and film education activity. As part of Shakespeare Lives, the British Council and the GREAT Britain campaign’s major global programme for 2016, celebrating Shakespeare’s works and his influence on culture, education and society, the BFI has also curated an international touring programme of 18 key British Shakespeare films that will go to 110 countries – from Cuba to Iraq, Russia to the USA – the most extensive film programme ever undertaken. The BFI is also part of the Shakespeare 400 consortium, led by King’s College. The BFI’s “Shakespeare on Film” is more than just timely, it is a glimpse of the matchless collection of brilliant endeavour from world-beating Shakespeare experts like Laurence Olivier, Peter Brook and Kenneth Branagh whose films have popularised Shakespeare over the years. Their theatre-roots are evident. They have respect for the text and cut lines with regret.

Other directors have successfully translated the stage plays for the screen, aiming, perhaps to make great cinema than great Shakespeare. Here, I relish Baz Luhrman’s Romeo and Juliet; Julie Taymor’s Titus Andronicus; Orson Welles’ Chimes at Midnight, Kurosawa’s Throne of Blood and Ran. And there are more.

I will not be the only one to be grateful to the BFI for their initiative in this anniversary year.”

Highlights from the biggest ever programme of Shakespeare on Film in the UK and the World will include;

International tour of 18 British films to 110 countries with British Council.

Play On! Shakespeare in Silent Cinema premieres at BFI Southbank with new live score by the Musicians of Shakespeare’s Globe. With a career spanning six decades, a lead role in one of Shakespeares adaptations, Richard III from 1995 and many other Shakespearian plays both on Stage and Film, Sir Ian McKellen will travel the world to present and discuss Shakespeare on Film, making him the perfect ambassador for this project.  Ian McKellen will also be hosting public bus tours of the iconic locations in the film, from St Pancras station and Tate Modern to Battersea Power Station and Hackney’s haunting gas holders. Richard III is also being screened at BFI Southbank, will be part of the international touring programme and re-released by the BFI in a DVD/Blu-ray Dual Format Edition on 23 May, with brand new additional material, including new audio commentary.

For more information and a look at the programme which kicks off in March go to http://www.shakespearelives.org/