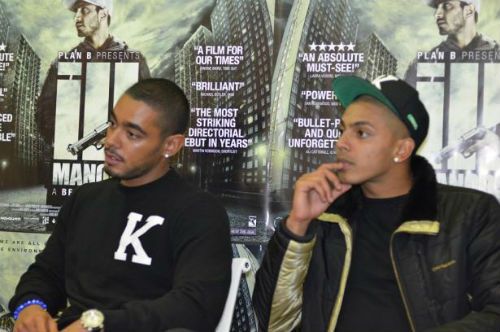 Ill Manors is one the most exciting films to hit the UK. A crime thriller set on the gritty streets of East London’s Forrest Gate. Shireen Fenner from Flavour heads down to Revolver Studio’s to talk to real life brother’s Nick and Sean Sagar who play Marcel and Freddie in the film. How did you both get into acting?

Nick: I would blame that on my mother. From an early age if it wasn’t football or piano it was something she wanted us to do that was creative. I kind of latched onto acting, and I’d be doing it outside of school like theatre shows and anything in school that I could get involved in I did.

Sean: For me it wasn’t even my mum. My dad pushed me to do football and that all went out the window. For me it was Ben with this because ‘Ill Manors’ was the first audition I went for. Ever since I did that a casting agent from that sent me for another show that I did last year ‘Top Boy’. It was like Ben kind of brought me in and said look you’re good at it, so stick with it.

Nick: Were close. There’s only two years between us were practically the same age. We were in school together and I think the fact that we are close in age means we can do a lot of stuff together. Plus he copies everything I does (laughs)

Sean: The relationships cool its just banter 24/7, there’s not much seriousness unless I steal some of his food. I think it’s cool, we get along.

Was there ever a point where you both were competitive both being actors?

Nick: We used to have mad arguments he used to get on my nerves.

In school we’d be in a fight everyday, but then as he grew up he stopped that.

Sean: I would say I’m better than him at football; I’m faster than him. This is the competitive side.

Nick: He doesn’t score goals. No but were not really competitive I think we kind of give each other ideas…

“I smoke a cigarette just before I go on set. For you to become a character, you have to live like one. Just like Heath Ledger did with the Joker, he lived like it.”

How do you immerse yourself into a film role? Is there anything notable that you do to prepare yourself?

Sean: I smoke a cigarette just before I go on set. For you to become a character, you have to live like one. Just like Heath Ledger did with the Joker, he lived like it. I think if you want a performance you have to be your character, you obviously have to bring a certain part of yourself into it. I think as much research, ideas and stuff you’ve seen before will be useful.

Nick: I think I’m lucky because I studied it in college, and then outside I took further studies so I’ve kind of managed to join in techniques that I’ve learnt to help me get into roles.

Ill Manors is set in Forrest Gate where you are from. How similar are the storylines to the real life East London?

Sean: The film portrays prostitutes but not just as prostitutes selling themselves, but prostitutes trying to better themselves as well. A lot of people would drive past and be like ‘ah look at them’, but you don’t know what they’ve been through, what there going through. You can’t judge them for what there doing. Where there ever moments when you could relate on a personal level to the role you were playing? What were they?

Nick: Not really because Marcel’s a bit of a pillack. That’s not an attribute I associate myself with. I do say I could relate to his drive, because although what he’s going for is deemed as bad, his drive and he wants it so bad he’ll do anything. I can kind of relate that to me and what I want in life with acting.

Sean: My character Freddie is just the joker, and in most situations in real life, if me and my friends are having a serious conversation I’m usually always the one to just mess it up. In terms of him being a right hand man for his brother again is the exact same, because obviously he’s my brother and I’ll do anything. In a sense Freddie was spot on for who I kind of am.

Ben Drew seems to be growing into a multi talented and versatile individual. What was it like being directed by him?

Sean: Being directed by him was amazing. It was a lot different because I worked with him previously for two years as his PA and stylist and I was always getting shouted out, and making sure I had this suit steamed. Him just sitting behind a camera just looked weird. He gave us the opportunity and allowed us to have a lot of lenience with the script and say this doesn’t feel right, how would you say it? Working with him has been the highlight of my career so far.

What did you think when you read the script?

Sean: When I read the script I looked at it and was like wow. We can look at it two ways; we can look at it in terms of it being an urban film, or you can look at it for the story that it’s trying to portray to you. Same thing as my brother said with the music, when you’re reading the script, you cant fit it in. Your looking at it like this doesn’t make sense, it’s confusing, but as soon as the music was put into it, it all just unfolded and was like wow. The music to the script played a big part in the whole thing.

One of the key elements of the film seems to be the accompanying soundtrack and music from Plan B. To what extent do you think it helped set the mood and scene of the film?

Nick: I think music in films people don’t realise how important it is. If you look at some of your favourite scenes in film there’s always a soundtrack in the background. If you play something from ‘Speed’, or ‘Inception’, I know it straight away because you see what you saw when you were watching it. I think with this because the actual music is not just instruments, there are vocals and raps towards the story, it puts you that much more on the edge of your seat.

What do you listen to?

Nick: I can tell you what he listens to, Chris Brown.

Sean: Yeah I’m a Chris Brown fan because I like to just dance, not just Chris Brown though. He just says it because every time he’s in my car I play it

Sean: I like nearly every one of them. He’s got a new song ‘Countdown’, ‘Don’t Wake Me Up’, ‘Turn Up The Music’, ‘Oh Yea’, there are loads of songs. I don’t like to be in a lonely or dark place, so for me his music inspires me to dance or just think of stuff.

What should people take away from watching Ill Manors? Is there a lesson to be learnt from this film?

Nick: The main thing I would say is don’t judge a book by its cover. Watch these people and realise why they have to make these decisions that if you didn’t see why they made them, you would think this person is terrible, how can they do that. If you can see why there forced to do it you understand more. This is what happens in real life, we only see the end product.

Sean: It’s not just a film, for me it’s a documentary film. A lot of people watch documentaries and there like wow I never knew someone lived like this. Put yourself in the characters shoes, or the situations there in, you would feel that you would end up doing the same thing they are. As me and my brother have said don’t judge a book by its cover, don’t look at someone and think this is all your about because its not. Everyone has a dark secret.

What do you think sets UK film productions apart from Hollywood and the rest of the world? What is unique about our industry?

Nick: I think especially with the comedy stuff, our humour is completely different, were a lot more sarcastic. Sometimes they think were being rude, but they love it because they are addicted to our shows over there. I think with comedy that’s the main difference. With a lot of dramas, especially with ‘Ill Manors’, its so gritty there’s no censorship with of our stuff.

Sean: The film is a hard-hitting story but a lot of people have come out and been like that was so dark, because it was. There’s not other way for me to describe it, and a lot of people try and go on this whole 15 minute description of what the film is, no, its just a dark film. I feel Americans are scared to release such films as ‘Ill Manor’, which is as my brother said gritty. Its even in terms of music like with dubstep, England isn’t scared to do it, they just do it. What are the plans for both of you now are you filming anything new or have plans to?

Sean: I’ve just recently been booked to do a new theatre piece that I start in August. I start rehearsals in 3 months and then we tour towards the end of November for 2 weeks. Then I go off to York, so I’m looking forward to being in York because apparently there’s a lot of sightseeing.

Nick: After last year, towards the end of last year I had a part in NCIS: Los Angles. After that I’ve had interesting offers and opportunities have started to open and especially after ‘Ill Manors’. I’m going to take time to pick my next one, because I want it to be completely different from this.

What are your main ambitions when it comes to acting?

Sean: I’d like to play a role such as Chris Tucker, Jim Carey, just a funny comedy role. I’ve done a few bits now with a hat and hood on, so I don’t really want to be jumping into that field anymore. I kind of want to swing it to the other side and make it go somewhere different.