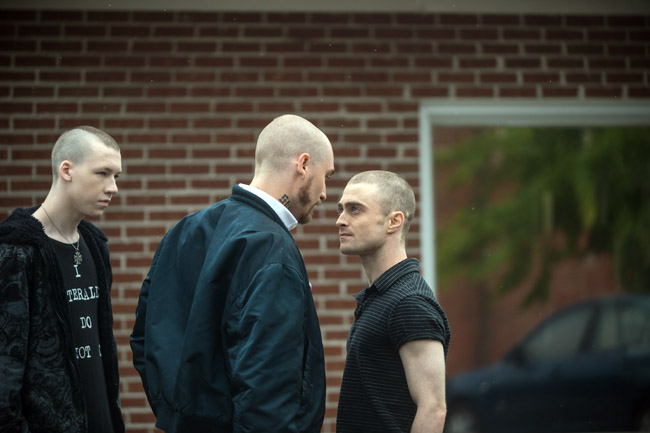 Daniel Radcliffe in Imperium may be a role that will shock you right out of your underwear, but even with a shaven head and his neo-nazi appearance, it’s still hard to shake off his Harry Potter persona even with a superbly intelligent performance that fools his white supremacist brethren.

Radcliffe plays Nate Foster, a straight-laced FBI agent who lacks the respect of his colleagues but has the tenderest of touches in his interpersonal skills. It’s these skills that get him noticed by his ballsy superior Angela Zamparo (Toni Collette) during an interrogation of a terror suspect. Zamparo is after a man who she can use to infiltrate a white supremacist group to get details on a planned dirty-bomb attack. With his slight frame, he may not visually be a right fit for the job but his intelligence in dealing with people is just what she needs.

In his doctor martin boots and shaved head, Nate quickly worms his way into the with his quick-witted intelligence. Even with all the nazi salutes and racist language never quite convincing the audience when he shy’s away from any real violence but completely fooling everyone else he catapults himself and his name with the most senior members of the group who quite frighteningly don’t appear as you would expect. The most menacing of the bunch are the professional’s that seem like ordinary people, vegetarian eating classical music listening members of the public.

As with any undercover FBI agent story, the age old cliché of said agent bonding with one of his suspects screams from its bile filled mouth louder than a megaphone used to express their racist chants, you see it coming a mile away however, what’s missing is the love of the new life he is leading as he struggles to have compassion with any of his new find friends, the one thing he was sent in to do to win their trust. Its lack of ability to hold the concentration of its viewer with a gripping script lies with the amount of speed Director Daniel Ragussis rushes through the story almost willing for this to be over as it just gets started, it’s all grisly with no meat on its bones.

Imperium is out on Blu-ray, DVD and digital NOW