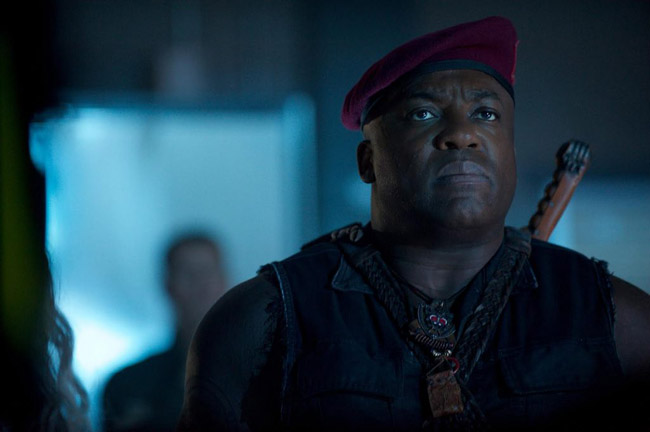 As well has bringing back some of the originals characters, such as Jeff Goldblum’s David Levinson and Bill Pullman’s President Thomas J. Whitmore. Independence Day: Resurgence has an abundance of new blood in the handsome Liam Hemsworth and rising star Maika Monroe, as well as the giant Doebia Oparei who plays warlord Dikembe who would do anything to save his nation from the alien condition.

We got to spend some time with Doebia, a British actor who only recently spent some time on our TV Screens as Areo Hotah in Game of Thrones to talk about his role in Independence Day and working on this visually epic, long awaited sequel.

Watch Deobia as Dikembe in this clip entitled Fear from Independence Day: Resurgence.

Dikembe is a Warlord; the story kicks off from the last movie were the Aliens have been having a decade long war in Dikembe’s country. Dikembe has to go back to his nation where him and his people are exposed to something called the Alien residual condition. They call in Dr. Catherine Marceaux (Charlotte Gainsbourg) to help them with this condition and they end up they end up calling in David Levinson (Jeff Goldblum). They end up going into Jake Morrison (Liam Hemsworth) spaceship into space. We are like this rag tag group of people going off into space with Dikembe on a mission to free his people.

Jeff Goldblum, Bill Pullman, and Vivica A. Fox all reprise their original roles, what was it like working alongside these guys?

It was really good; Jeff is such a good actor to work with. He is such a hard worker. He loves to sing in between takes and he is a singer. He is a singer in a Jazz group; there would be singing and songs in between takes. The first day he came in was like Arthur Miller’s Death of a Salesman. He would assign everyone parts and in between takes would come and sit with you and play the scene with you. It was a really good way of bonding. He’s a real professional. He would find ways to make you feel relaxed. Vivica is funny and such a lovely woman, Bill was fantastic. It was a really good cast.

Writer and Director Roland Emmerich is known for creating visually epic films, how does he manage to deliver his vision while on set?

You get something called a previs, which you see it on a tablet; it’s where the special effects team have done a mock, almost like an animation of the world you are going to be in. So if we were in a spaceship we would we would see an animation of what we are looking at and what the actual ship is going to look like. Even though the sets were incredible the actual real thing we get to see that in an animated form. So we had that in our imaginations when we walk in set. He really made sure we saw that animation of the big action sequences.

Independence Day: Resurgence has been 20 years in the making what can we expect to see with the advancement of technology?

Bigger and Better (laughs). I think the film looks a lot better but at the same time, it’s still a character driven story. The spaceship is incredible, the weaponry certainly some of the alien blasters I get to use are amazing. The look of the film itself looks very high tech. It’s going to really appeal to that sci-fi geeky genre kind of person.

What is your view on the 20 year gap since the first Independence Day? Is this one of those films which you don’t need to have seen the first to understand what’s going on?

No, you don’t at all! The first is a standalone movie in its own right, As I think this one is. Obviously, there are a lot of characters that come back into this but there are lots of new characters like myself who are taking up the story reigns with the likes of Jesse Usher, Hemsworth, Maika Monroe. I really think that as well as being true to the first film in terms of the original characters story continuing in a really exciting and poignant way there are new storylines being told. It’s a really exciting standalone movie.

You’ve been part of the Game of Thrones phenomenon; it seems to be a series which catapults actor’s careers. Are you hoping it’s going to give a boost to your career?

Absolutely, yeah. It has and is doing great for me. For sure when you come out of Game of Thrones it catapults you up. That’s created more opportunities, in that respect there is that desire. Game of Thrones is a really good show to be on too. The stories are fantastic and it’s a great company of crew.

You’re quite a tall man; your height is 6 foot 6? Does that help or hinder in the parts you go up for?

I think it gives me a particular look. It’s a very specific, particular look that I have. I’ve always seen everything about myself as an actor and that’s what makes me unique. I think in terms of being cast it’s always particular but for me it’s a positive thing because it means I get to be in things that I find really interesting. I know as an actor you make everything work. I’m in the body I am in so that becomes my tool, I always see it as a positive, it’s never occurred to me it could be a hinder me.

Independence Day: Resurgence is out in Cinemas and Imax June 23.