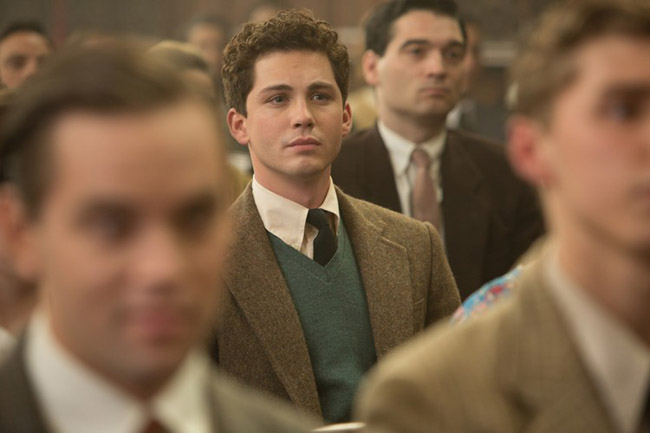 Indignation is the feature film debut of the vastly experienced producer and film executive James Schamus -who has been a mainstay of cinema for the past two decades.

He is an award-winning screenwriter who has collaborated frequently with cinematic great Ang Lee on films such as Brokeback Mountain, Lust, Caution and Crouching Tiger, Hidden Dragon. The kind of impressive pedigree that’s just what is needed when you are looking to adapt the work of Pulitzer Prize-winning novelist Phillip Roth to the big screen.

Set in 1951 Indignation tells the story of Marcus Messner (Logan Lerman) a working-class Jewish boy from New Jersey who enrolls in a conservative college in Ohio; thus exempting him from being drafted into the Korean War.  As with all adaptions of novels to the big screen – especially ones epic in scope – it can often be hit and miss what elements from the book resonate with an audience and what elements don’t. Indignation explores many different issues such as war, Romance, psychological dysfunction, religion and repression. The Film is at its best when it deals with these issues through mood and atmosphere – complimented by its authentic period setting and attention to detail. But I often felt disconnected and at a distance to many of themes when they were delved into as part of the narrative.

The romance between Marcus and the complicated Olivia (Sarah Gadon), although well acted – never felt fleshed out or explored in any great detail to make you care about the outcome of their relationship. We have seen time spanning doomed love stories have much more of an emotional punch in movies like Atonement and The Notebook – Indignations romance felt very underdeveloped in comparison. The movie tries to wrestle with mortality and philosophical debate over one’s choices but again was never expanded enough to retain your interest. Except when it came to the marvelously witty confrontational debates between Marcus and the imposing Dean Caudwell played wonderfully by Tracy Letts. These ideological opposing conversations did more for the film’s central themes and ideas than any other scene in the movies entirety. There is a beautiful flow and rhythm to their dialogue that is lacking elsewhere in the film and I would have happily listened to them talk to each other for the films run time.

Indignation suffers from common pacing issues that often plague adaptions of Novels to the big screen.  The film didn’t have enough time to breath and as a result of these issues ended far too abruptly. It has a veritable period setting that helps enhance its tone and atmosphere but will ultimately leave you feeling unsatisfied.