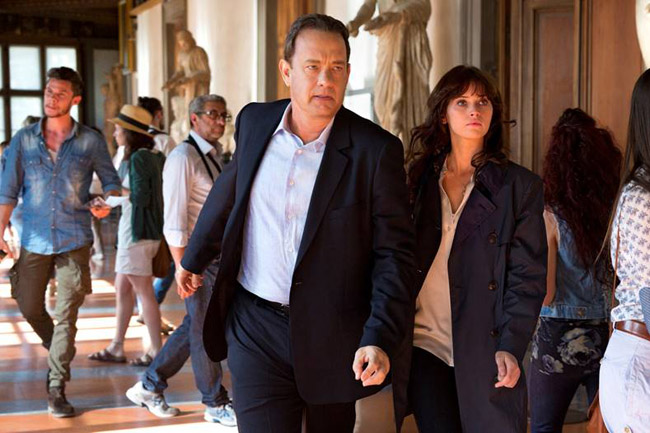 Inferno – the last in Dan Brown’s Trilogy – See’s the return of our beloved Tom Hanks as Robert Langdon in a picture which even he can’t save from draining on the soul with a drawn-out and drama-less chase through the beautiful landscapes of Florence and Istanbul.

Whilst not completely terrible – despite what else you may read – Inferno plays out more like an advert from the tourist board of Florence with a fascinatingly surprising twist which slaps you in the face like being hit by a wet fish. Exquisite architectural views of museums and alike provide a filling dessert for the eyes as Langdon and his female companion Dr. Sienna Brooks take to the streets, on the run from various different parties, not knowing exactly who they can trust.

Why don’t they know who to trust? Well, we enter the film with Langdon waking up in a Hospital in Florence, Suffering from ‘amnesia’ with no idea why or how he has even come to be in Florence. Suffering a head wound which causes excruciating pain and horrifying thoughts in his head – which flash onto the screen throughout as his situation starts to unravel – as a rogue female police officer opens fire on Langdon and the Doctors, Dr. Sienna Brooks – with her complex intellectual mind which seems to been developed as a child – helps Langdon escape and makes it her mission to help recover his lost memory to discover why exactly he is being hunted.

Turns out a fanatical billionaire, Bertrand Zobrist – played by Ben Foster – who is completely fixated on the overpopulation of the world thinks it’s his mission to save the world from itself. He creates a virus which will wipe out 50% of the world’s population but before he kills himself hides it in a secret location leaving behind clues to its whereabouts via symbols littered in Botticelli’s illustrations of Dante which, along with regaining his memory, Langdon has to decipher to find and save the world but not before the multiple twists explode in his face.

Brown’s trilogy with The DaVinci Code and Angels and Demons have met with some serious criticism over the years and with a seven-year gap since the release of the latter it may have been a good idea for Director Ron Howard to leave this one sleeping. Hanks seems to overplay his Robert Langdon and Felicity Jones performances reeks of stilton, stilted and wooden. Foster again seems typecast as that egotistical and unlikable character he so often plays. Some can now breath a sigh of relief that this series has come to an end.

Inferno is out in cinemas October 14