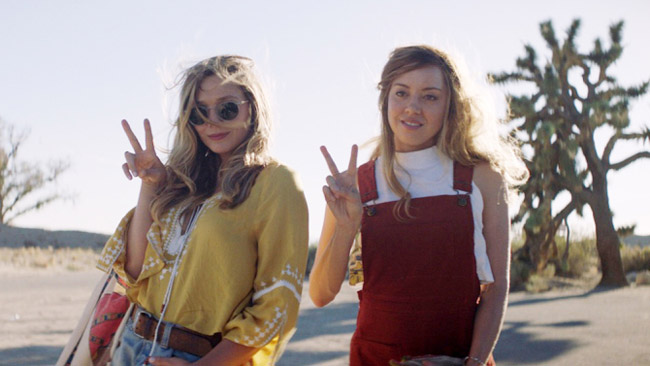 In a world obsessed by followers and likes via social media platforms, people often hide behind a photo telling a story of their ideal life but for so many their real life is a maze of loneliness and struggle, empty of physical and emotional attachment from a world full of vanity and self-importance. Bringing the theme to the big screen is a step in the right direction to address the issue’s to those guilty of living their lives just for a moment of Insta “fame”.

Audrey Plaza puts in a star turn as Ingrid, a slightly deranged young woman who is finding it hard to cope with the death of her Mother. Pushing her over the edge, she lives through her friend’s wedding, one she didn’t get an invite for, through pictures posted on Instagram. She experiences an epic meltdown when she turns up to the wedding, pepper spray in hand, attacking the bride. Fresh out of a mental institution Ingrid decides to take the money her Mother left her and make a new life for herself in Los Angeles, Starting a new Instagram account, with one aim in mind, to become best friends with her latest Instagram obsession, Taylor (Elizabeth Olsen).

Taylor is a Photographer/Online “Influencer”, the girl everyone desires to be, living a seemingly perfect life in her stylish home and a dotingly romantic husband, every moment of her life is an Instagram photo opportunity. The bearded hipster husband lives on the coattails of Taylor, no career to speak off; Taylor pushes him down routes he has no desire for. When we first meet him he’s a budding “artist” transforming pictures and plastering the latest hashtag phrase in the middle and charging a small fortune to any poor sucker willing to pay.

As Ingrid manages to manipulate and lie her way into their lives her social status begins to soar, but her mental fragile state starts to take a battering, exposing a more nuanced character than one just placed to provide a few laughs. Addressing the issue of depression adds a fresh layer of narrative diverting from the narcissistic wit and spirals into a darker drama in which you can’t help but want to reach out and give this poor woman, who so desperately wants to be loved, a big hearty hug.

This truly is Plaza’s performance platform, one in which she gets to flex her acting chops to prove her abilities go beyond comedy but can tackle drama head-on with heart-wrenching panache.  Olsen’s turn as Taylor is a little understated, whilst a major player in this game of fake fame her performance is lifeless and flat, just a tad more viciousness could have given a layer of significance. Also woven into the story is the love interest with O’Shea Jackson Jr, her batman fixated landlord – more of a side note than a fully developed storyline, Jackson does the best he can with the little screen time he gets.

Flat in places, Matt Spicer’s ode to stalking for the millennial generation, delves into the dark recesses of social media obsession with just the right balance of finger poking fun and the effects it can have on mental health. It’s a wake-up call to those that obsess over the lives of others through a rose-tinted lens which never quite show the real truth behind the fake facade.

Ingrid Goes West is out in cinemas November 17th.