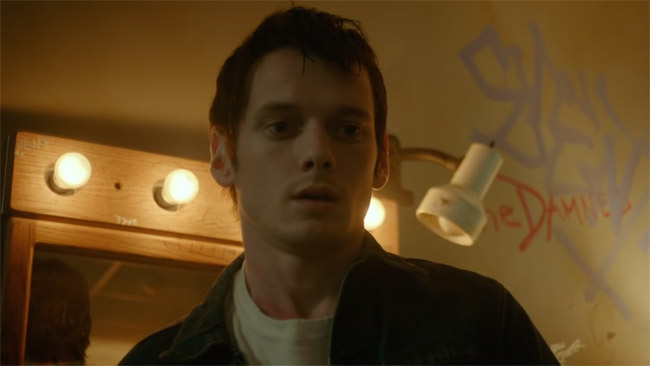 With the release of the gruesomely brilliant Green Room on Friday, May 13 we sat down for a chat with lead actor Anton Yelchin to talk about the film and working alongside the legendary Patrick Stewart.

The baby-faced actor, Anton Yelchin may still look in his teens but this 27-year-old actor has been in the industry for the past 16 years. In fact, we first became fans of this young actors work when he starred in the TV Mini Series Taken where he played a half alien, half human child. His career has seen him go from strength to strength ever since. He has now cemented his name in sci-fi with the latest version of the Star Trek franchise as a young Chekov and will see him reprise that role again later in the year in Star Trek Beyond. Green Room is pretty gruesome, I think I nearly threw up when I saw what happened to your arm. Was it quite refreshing for you to be involved with something so brutal?

It was certainly interesting; it was the brutality and uncertainty I was drawn to. It’s not arbitrary in the sense that you see a certain type of film, killing off people randomly left and right and never getting to know them. It’s Ambiguous and violent act is a spectacle. I think that Jeremy uses a respectful violence. You are simultaneously getting to know each character; I think that kind of hints at the absurdity of violence and brutality. It was tough when we were shooting.

From the moment, the band step into the venue the film has a constant intensity which never lets up. Maintaining that for weeks on end during filming must be pretty exhausting?

Yeah, it was, We were filming for a course of 16 hours a day once we were in the venue which was shot over 3 weeks. The moment I get attacked was shot over the course of 2 days. It was pretty brutal keeping that up. You just have to be kind of committed to it, you read it on paper and envisage what it’s going to be and just commit to it. I just can’t see any of way to it.

You and your fellow bandmates seem to have a bond which seemed extremely real. Were you that close to the rest of the cast at the time?

Yeah Alia (Shawkat) and I had been friends from before as we ‘did a film together. Then Joe (Cole) and Callum (Turner) become friends when they arrived on set. The whole cast were just great, great people. Even the people who were enemies of mine in the film, Imogen (Poots) has been one of my good friends for many years now. Everyone just got along so well. When we weren’t shooting, on our days off we had a great time. You’ve been involved in music in the past, did this help in your role as Pat?

Is it true you co-wrote some new material for the Film?

No, we didn’t write any material. Alia and I wrote the jam in LA and then we played it at the Wrap party as a band. We had been messing around with it on the weekends, that was fun. Alia has an incredible voice.

Was there any part of the film that was challenging for you? The killer dogs looked pretty mean.

Just trying to maintain the intensity was draining and challenging but that was the only way to go. That’s just the nature of the beast. The dogs are actually actor dogs; they actually think they are playing so they play really, really rough. You aren’t allowed to talk to the dogs because they are like focused, like method dogs (laughs).

You got to work alongside Patrick Stewart, What was this experience like?

Wonderful, I think anytime you met someone that has achieved so much over the years on stage and on screen and they turn out to be this great person. He is the loveliest man, so kind and funny and respectful. That’s such a huge thing to someone to encounter with someone who has accomplished so much in his career, it’s incredibly fortunate. You learn something about how you want yourself to be should you ever find yourself in that position. We didn’t talk any set at all but we had a few nice conversations ‘after work’. On set, it wasn’t really conducive to our work.

Your set to star in another 3 films being released this year including reprising your role as Chekov in Star Trek beyond, which one are you most excited about?

I’m always excited about seeing how the films I worked on turned out. I’m always curious to see where the effort went and what it turned into.

Bad Robot are known for keeping pretty hush, hush over their releases with not releasing too much footage, it seems the same with Star Trek Beyond, can you give us just a little insight into what to expect?

I’m in the same boat; I haven’t actually seen the film yet. I guess we’ll all see that together.

Green Room is out in Cinemas May 13.