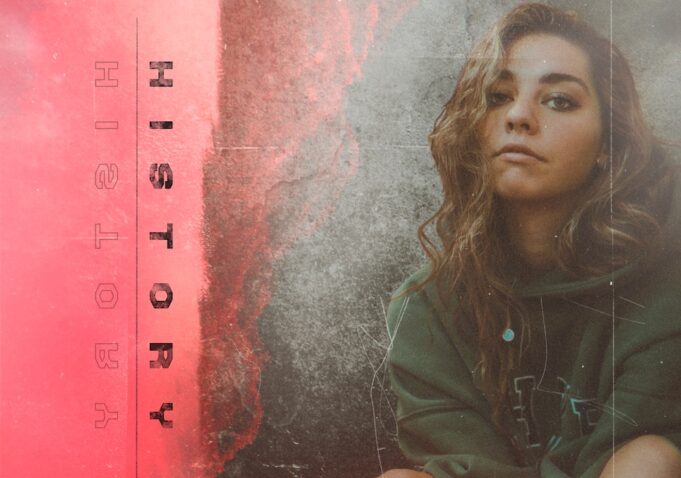 Back with her new single ‘History, Alt-pop princess Beren Olivia is an artist to watch.

Having found success as a model and on stage, Beren is asserting herself as the creative artist she was born to be. Honing her skills since teaching herself guitar at age 13, ‘History’ is a statement of intent from the up-and-coming songstress whose future looks very bright.

I chatted to Beren Olivia about her new single and what it’s like being a female artist in 2020.

Welcome to Flavourmag. How are you? How have you been staying creative?

I’m doing really well thank you! The past 6 months have been a rollercoaster of emotions for everybody, especially with lockdown being in place earlier this year. To tell you the truth, I’ve found it quite easy to stay creative through all of the chaos. I’ve found that I’ve had lots of time to think, and lots to write about as a result.

What inspired you to create ‘History’?

‘History’ was one of those songs that were written super quickly. It just flowed. I started it after being inspired by an episode of Grey’s Anatomy – one of the characters said “how do you choose which rules are okay to break?” – which I then thought would be an interesting concept to liken to a relationship and knowing when to give up or keep going when you’ve called it quits. Usually, for me anyway, it’s always been the history that I’ve shared with someone that’s kept me from moving on.

The process changes all time – mostly for me, lyrics come first. I think writing is an amazing way to clear your head and get whatever it is that’s bothering you, out and on paper. A lot of times, I’ll sit quietly by myself and record a voice memo of me just talking. Especially if I’m really mad or upset about something. I’ll just record everything I blurt out in the moment and then go back and listen when I’m ready to write. I always find that in the heat of the moment, I’ll say things that I wouldn’t otherwise think of when trying to write. However, if anyone ever listened to the voice memos on my phone, they’d think I’m crazy!

I always find it hard to describe my sound, to be honest – it doesn’t really fit in a single genre. In technical terms, it’s in the ‘alt-pop’ category but I like to describe it as cinematic with a pretty, storytelling topline and conflicting dark, bassy production.

Females in the music industry (and the entertainment industry in general) have, without a doubt, always had it tough. However, I do think there is a huge change happening and people are becoming more aware of the inequality that exists. I feel lucky to be a developing female artist in 2020. I have such powerful female idols to look up to in this industry and as a result, I feel more confident in myself and don’t feel afraid to use my voice.

If you could create a female-dominated festival line-up, who would it include?

What’s been your biggest Rockstar moment?

Being recognised in public is such a crazy concept to me. The first time it happened, I was at a Halsey concert. A fan touched my arm and just stared at me – the thought of her knowing who I was didn’t even enter my brain, so I thought she was asking me where the bathroom was. I still feel so bad for not realising because I would have given her a huge hug!

If you could collaborate with anyone, who would you choose?

I would love to duet/collab with Post Malone one day. Also, Oak Felder is a producer I’m dying to work with – I love his creative process. All that being said, it’s my absolute dream to one day write with Taylor Swift.

For someone who is infatuated with music as much as I am, I’m ashamed to admit that I’ve never been to a festival in my life. This year was meant to be the year…lol well we all know how that panned out.

What’s next for you? Can we expect new music?

Lots of exciting things are in the works at the moment! We have a special new version of History coming soon which I’m so excited for and we are getting ready for another single release within the next couple months, so keep an eye out for news on my socials!