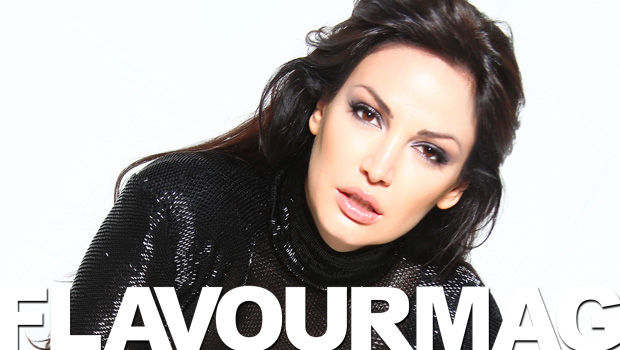 Bleona is an international pop diva. She started her career at the tender age of 5 in Albania and has since gone onto grace the cover of numerous fashion magazines, sell out arenas and work with some of the biggest US producers. We spoke with Bleona about her debut UK release, ‘Take It Like Man’, what we can expect from her next album, and those eye-catching fashion choices.

Take It Like A Man’ is your debut UK single which is released in the Autumn, are you excited about launching your career in the UK?

Yes of course I have been looking forward to it for a long time and we have been getting wonderful feedback from the DJ’s playing the song and the remixes in the UK clubs. Thank you to all of them.

Where did the idea for ‘Take It Like A Man’ come from?

I have always been rebellious in my songs… And always the lyrics of my songs have had a strong sense of female empowerment. In my country when you think “female power” definitely my name comes on the first row of “power girls “.
Now that I am getting introduced to the world it couldn’t be any different. A song that has a strong message letting the world know what I stand up for!

So this a strong female anthem?

Yes yes yes!!! I believe women deserve to succeed deserve the chance to make choices deserve to be equal.

Of course Beyoncé springs to mind when talking about female empowerment, are you a fan of her work?

Absolutely! I love her work and her discipline.

You have worked with great producers Timberland & Darkchild on other singles, who would you like to work with next?

I would love to work with Calvin Harris & Max Martin.

You had eight albums in Albania; when can we expect the next album?

What kind of sound will your next album have?

Is it easier to sing in your native language or in English? Which do you prefer?

Of course my native language is easier … Now English has become the language I think automatically from though … Although I have to admit 3 years ago there were lines I was singing in the studio that I had no idea what they meant! Lol You have an interesting fashion sense, how would you describe your style?

I am bringing “BEAUTY BACK”!!! My style is a glamour and as sophisticated as it can get! I loved the time Sophia Lauren and Marilyn Monroe! I want to bring that back. I think the music industry has gone a little too far on the concept “I’m weird that’s why I am famous” I want to set a good example for every other little girl out there! You will never see me coming out drunk from a club at 2 am! I don’t think there is no need for magazines to publish that at all!

How do you decide of what to wear for a stage performance? Does it depend on your mood?

It depends on what is the song and the event all about! Then what the next latest hottest thing out there!

Now you’re known worldwide, does your schedule ever get too hectic?

I was born hectic! That doesn’t bother me. I love living in Airplanes

You started in this industry at a very young age, do you think you could see yourself doing anything else?

How have you been able to stay so grounded after being in this industry for so long?

I think I have handled my fame pretty well! I think that has something to do with the character of someone and what family they have and they come from! I have an excellent family that keeps me grounded at all times! I have never drank or done drugs in my life!

What is next for Bleona?

Finally anything you would like to tell the Flavourmag readers?

Find a guy who calls you beautiful instead of hot, who calls you back when you hang up on him, who will lie under the stars and listen to your heartbeat, or will stay awake just to watch you sleep… wait for the boy who kisses your forehead, who wants to show you off to the world when you are in sweats, who holds your hand in front of his friends, who thinks you’ re just as pretty without makeup on. One who is constantly reminding you of how much he cares and how lucky he is to have YOU… The one who turns to his friends and says, thats her…