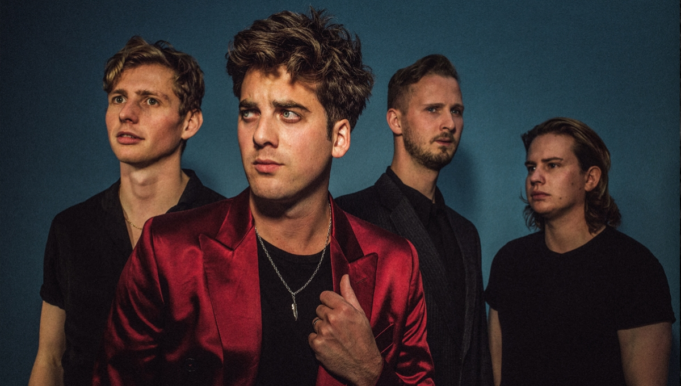 Circa Waves rocked the BBC Radio 1 tent at Reading Festival on Friday evening.

By now we all know what happened with ‘Young Chasers’, their debut album that arrived in March of last year hitting the top 10. That it berthed four Radio 1 A-list singles, the most notable – and for a time completely unavoidable – of which was ‘T-Shirt Weather’.

Tell me about your album ‘What’s It Like Over There’?

J- It’s our third album, it’s definitely a bit of a change for us! We’ve incorporated more of a broader range of musical styles on this record. Our first album was pretty much just indie, our second album was more rock-influenced and our third album was just very experimental and just us trying new things

C- I came to the band really late

J – We all met in Liverpool actually! We had been in other bands for years and we didn’t really know each other well. Kieran then started a new project that got a lot of radio hype and needed to form a band pretty quickly. So it was basically us being there at the right place, right time. We had a different drummer and Colin used to tech for us… we prefered Colin so now we have Colin

J- yep! If work for us and then we like you more than a member of the band, we just get rid of them. It’s that easy really…

Do you have a favourite track to perform at a festival?

C- Off the new album, I’ll go with ‘Times Won’t Change Me’. There’s a little bit of instrument swapping which is different and fun

J- I’ve definitely almost have fallen over a couple of times. We did a gig at Heaven in London one time and I stood on a monitor. The stage there is pretty high and basically, the monitor fell forward. I almost broke my neck

S- Shit, sounds pretty dangerous. No more monitors for you then

J- yep, I stopped after that incident… never again.

What’s the craziest thing that’s happened at a gig?

J- We had a show in Japan last week and afterwards we had to put a girl in an ambulance, she drank way too much so I’d say that was pretty crazy.

S- I actually went to your gig in Camden when it was turned into your own little pub and I was actually front row and ended up being yanked back and punched that night… Definitely, the craziest experience at a Circa Waves show I’ve ever had!

J- Oh My God! Yes we remember that! She was so drunk and kept trying to touch my guitar whilst I was playing… Nightmare

If you could party with any artist or band on the lineup, who would it be?

J – I heard he stinks though

C- I mean I think we’ve all heard that