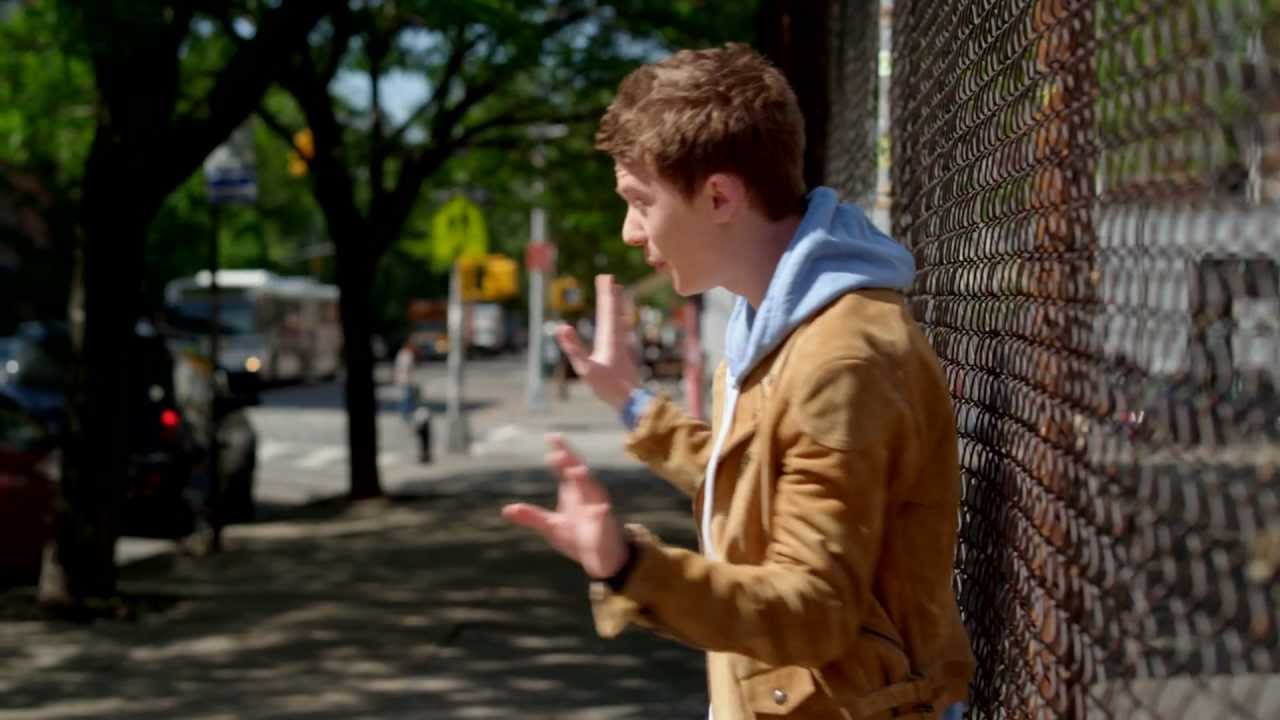 Whether like Pharrell you think this young man is going to ‘change the face of music’, or as critics have dubbed him, you think he’s the British Bieber. Conor Maynard at 18 is already flying high with over 90 million YouTube hits and 300,000 twitter followers. Make sure you’re one of them @ConorMaynard. Flavour hooked up with Conor at the HQ of his record label EMI, atop of the scenic roof garden to discuss his album ‘Contrast’ and single ‘Vegas Girl’.

Hi, Conor, how are you?
I’m all good thank you.

What is an average day for you like at the moment?
Very busy, getting up really early… which is great! There’s obviously a level of commitment that’s expected from you being a singer and you’ve got to give 110% otherwise someone else will take that from you. But for me, it’s cool. It goes from interviews to being in the studio to getting on a plane, going to some random corner of the world that I’ve never been to before, meeting all different fans, ‘Mayniacs’ as they’re called.

Where’s the strangest place you’ve been to so far?
In terms of hard to spell, Dusselldorf, in Germany, that was a really fun trip. And I was in Ibiza the other day which was quite fun.

‘I remember I used to get asked to sing at school everyday and I didn’t get to eat my lunch (laughs) and I really wanted to eat my lunch so I started putting covers online.’

Before you got big, had you ever anticipated this sort of lifestyle?
When you’re not in the music industry and you kind of look at it, it looks like it’s all fun, like all they do is music videos and they party with other big artists. But it’s not, you have to make a lot of sacrifices too. For example, I’ve moved away from home, so I don’t get to see my family and friends as much as I used to. But I make sure that I’m always enjoying myself, no matter what I’m doing. I’m surrounded by people that make it fun. It’s a lot more time consuming, you have to put in a lot more work than I thought but all ends up in some crazy party after some crazy event that you’re only invited to because you’re an artist.

Did you ever think that you’d end up making it big through YouTube?
When I first started uploading covers it was mainly just so my friends and family could watch them. I remember I used to get asked to sing at school everyday and I didn’t get to eat my lunch (laughs) and I really wanted to eat my lunch so I started putting covers online. Then one day I did a cover of Usher’s ‘OMG’ and I did a proper video for it and it just blew up! I was like ‘no way! Why are so many more people watching my videos now?’, it went to 100,000 views. ‘ The next cover I did was ‘Beautiful Monster’ and I didn’t really know if it was going to do the same or whether it was just a one off. Then it hit 1 million views, so it was crazy to see it blow up that much, I never expected it but it was definitely a pleasant surprise!

On Ne-yo: ‘There were never any grudges, it was very clear why it needed to be done.’

Do you look at comments?
I try to, I used to try to reply to each one which now would take the rest of my life so I don’t do it anymore. I love reading ones where they say how much they love the cover, that they enjoyed it. As long as they’re enjoying it, it’s cool. I always try and keep up with what fans are thinking and what they want next.

How do you feel about any bad comments?
YouTube is ruthless. The ones where it is constructive criticism, you take that on board and you think, right, next cover I’m going to show them what they want me to do. But sometimes it’s just stupid but I think I’m very lucky because the amazing comments out-weigh those kinds of comments.

Would you have ever done anything like the X Factor?
I never really got the chance to think about it. I was still in college when the whole YouTube thing blew up, I didn’t realise that it was going to go that crazy and I had to leave college early to pursue the music career. It was mad, I mean, Ne-yo himself saw one of my covers and tried to sign me and that created this buzz of like ‘who is this kid that Ne-yo wants to take off to America and sign?’ It was like a whirlwind in the way it started, I was signed very quickly. So I never really got the chance to think about how else I would have really done it. But I know that, I was always planning to do it more just like sending off demos and music to labels. I had a friend who was just incredible but she never got through the first round of X Factor and so I kind of think well, I don’t know what they’re looking for. She had the most insane voice.

Whose idea were the ‘Conorcles’?
That was kind of a joint idea between myself and a load of people. We were trying to work out the difficult step to go from recording videos in my bedroom to having a real music video and like ‘oh, I’m a real artist now’, it’s difficult to show that transition. So I thought the Conorcles were a good way of showing the fans exactly what I was doing and how I was making that transition, that I’m with them every step of the way.

So as you say, you got spotted by Ne-yo, it was a pretty brave decision not to sign with him, why did you decide that?
I thought about it, I wasn’t just like ‘Oh my God it’s Ne-yo, nobody tell me not to sign with him!’ I mean I listened to people around me who knew about contracts better than I did, people who were looking out for my best interests. Whereas that just wasn’t in my best interests, I would have had to move to America, I was only 17, I would have had to leave my family because they couldn’t have come with me, I have a younger brother and sister. It would have been a massive jump when I had other offers that were better and easier. And it was never done in a bad way, I explained to them how I felt and Ne-yo’s now featuring on the album and has written an incredible song for it. There were never any grudges, it was very clear why it needed to be done. You’ve been compared to Justin Bieber, which you’re shrugged off a bit, how do you think you two are different?
It’s crazy because he’s such a massive artist and I’m so early in my career, so to be compared is both crazy and flattering. We are both young and we both came from YouTube but in terms of the music we are both releasing he’s still got the pop element there and I feel like I’m British for one, my writing has British influences and I think I’ve got a kind of mature rnb sort of thing. There’s a song on the album written by Frank Ocean and he’s a very ‘out there’ kind of writer, I feel like some of the songs are a bit left and not so mainstream. I never created a sound to fit into something, I just created something I enjoyed and that sound ended up being different.

‘A woman claimed that her first child was conceived whilst listening to one of my songs, so that was a nice little story that I read out to my Mum!’

So as far as the album goes, where did the name ‘Contrast’ come from?
It’s a play on my first name ‘Conor, Contrast’, ah so clever! It’s a contrast to what people might be expecting, like a young poppy sound and it’s also a contrast to what’s already out there. There’s a contrast within the album there are some upbeat dance tracks down to slow piano ballad kind of things.

Obviously being a young good looking guy (he laughs) you’ve been getting a lot of attention from the ladies. Are you single first of all?
Yeah I am…what’s up? (winks) I’m joking, if I was in a relationship it would be difficult because so much of my time is spent doing what I do, so I’d never be there and it would be ridiculous. But that’s something for the future hopefully. Have you had any funny gifts or feedback from fans yet?
I remember really early on, I was only doing covers and I was sent a message from a woman who claimed that her first child was conceived whilst listening to one of my songs, so that was a nice little story that I read out to my Mum on Facebook not realising what it said whilst I was reading it. I was like ‘Oh look I’ve got fan mail Mum’ and she said ‘don’t read fan mail to me ever again Conor.’ I do get given lots of crazy things, I get given a lot of pandas but I’ll let you look into why!

Well Conor, we think we might have discovered why…..have a look at 2:40!

You’re from Brighton, what was that like growing up?
It was a cool place to grow up. There’s the beach, the city as well as a lot of farmland going on. I suppose the versatility emulated onto my music as well. I’ve got quite versatile influences, growing up I used to listen to people like Michael Jackson, Stevie Wonder, then I went through a very rnb stage with like Usher, Mario, Justin Timberlake and I also listen to people like Green Day and Good Charlotte as well and now I listen to a lot of rap. They’re really supportive to young musicians, they’ve got Brighton’s music group and there’s a lot of talent shows and open mic nights.

You were still at college when you had your breakthrough, did people start to treat you differently?
I always kept my closest friends as the ones that were there, I know exactly who they are. I  mean there have been changes, people who hit me up non-stop and it’s a bit like, you never used to do this before all this. I just kind of shrug it off, you weren’t really my close friend before and I don’t think you are now.

What advice would you give to any other young musicians?
Use YouTube as a platform. But a lot of people know that, and a lot of people do that. What worked when I did it was, you’ve got to take a song but no matter what you do, you’ve got to make it your own. In your own way, your own style, whether you change the lyrics or the melody, whatever it takes to make people become a fan of you rather than the song. That’s when people start to respect you as an artist.

Vegas Girl is out now, whilst you can pre-order your copy of Conor’s debut album now, which is released on July 30th. Alternatively follow Conor on twitter @ConorMaynard.