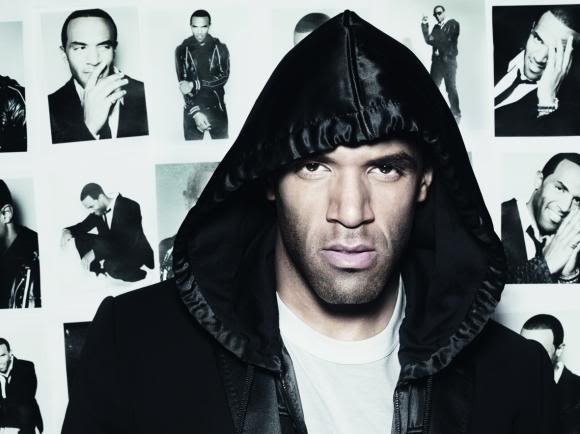 He was a screensaver on millions of teenage girl’s mobile phones, a pinup heart-throb and countless middle-aged teachers’ bedroom fantasy. Craig David has come a long way since his goatee beard, beanie hats and those iconic attires. But make no mistake—he’s still the same Craig writing songs in his bedroom, something he has been doing since the beginning of the millennium. In 2002, the then 19-year-old invaded the charts with his debut album, ‘Born to Do It,’ which spawned four critically-acclaimed singles. One of which —’Fill Me In’ made him the youngest British male solo artist to ever reach number one. He went on to shift over three million albums in the US and 13 million worldwide.

In actual fact, the Grammy-nominated garage pioneer still remains one of the UK’s biggest music exports. But Craig David doesn’t particularly want to be famous anymore. He would much rather not be seen. Yet, he is preparing for endless times. He is working harder than ever before on a new album and an upcoming worldwide expedition. He is preparing for a world tour where he’ll be visiting places like Melbourne, Paris, London and Germany. We caught up with Craig in the midst of his very busy schedule, and discussed in detail his career, his fashion highs and lows through the years and why he thinks Eminem was ‘Born To Do It’.

How does it feel to know you have changed the history of music? Do you think about it a lot?

When you look at it now, it’s beautiful to know I have had such an impact as a young kid who just had a dream. When you put action to those words and see the power of what that is – it’s also incredible. I believe for anyone with a career in the field of entertainment if you put everything, you have into your dream you can make a massive impact.  That for me is very powerful rather than recognition. I love that it sets examples for other people to say look ‘If you sit back and do nothing, then nothing happens, but if you do something, then things will happen.’

In 2009, MTV ranked your debut album ‘Born To Do It’ as the second Greatest Album Ever behind Michael Jackson’s ‘Thriller’. How does that feel?

That was incredibly flattering. But again, with all the recognition that you get – on one side your ego can get super huge like, ‘Look at me. I’m second behind Michael Jackson,’ and then you start to believe and buy into expectations, or you can look at it and say ‘It’s a great honour to see how powerful my music has been.’ I don’t rate myself in that sense because I believe music is subjective – whatever you feel or relate to should work for you. Having said that it’s nice to reflect on what I’ve been able to achieve along the way and especially around the world. It’s amazing how that album just connected with so many different generations from different cultures and is still doing so. I love that.

I have no idea. Music is one of those things which you have got to enjoy whilst you’re doing it. The one thing I have learnt more importantly than anything is ‘If you’re doing it for the material values or for the money, then it simply won’t last.’ I hope I will still be making music later in life, but if I suddenly want to do something completely different, then I am a big believer in allowing a person to just do what they want to do. Not because you’re a musician you should remain in that bubble – what about if you don’t want to spend the rest of your life making songs? Maybe you want to become an architect and build hotels. I believe you should do whatever that you are passionate about.

Let’s rewind back 10 years. What was the difference between that Craig David back then and the Craig David today?

Ten years ago, I can remember running around and enjoying the whole whirlwind trip of fame. At school they told me, I needed to focus on my education, but there was something else telling me I should do music. I always knew that I didn’t want to do a 9-5 job. As a matter of fact, I didn’t really know what I wanted to do, but the exciting part was not knowing, exactly what I wanted to do.  Yes, I’ve seen the fruits of my labour and the beautiful things that it has been able to buy me, but I am now in a place in my life where I make music because I’m passionate about it. I’m not making albums anymore because of  deadlines. Now, it’s a different place for me which I’m loving because back then I felt as if I had to really prove myself, whereas I don’t need to be doing that anymore. It’s all about enjoying the music.

One of my favourite songs of yours—is ‘7 Days.’ No matter how old it gets, it never fails to take me back to the good days. I don’t know if you have anything to share about how that was recorded or how it was even written. I mean, I can’t even sort of imagine how…

There was a really nice chemistry between Mark Hill and I, who co-wrote the song on my first album. We were both hungry to show each other what we were capable of. He was struggling to pay the rent on the studio, and I was this young artist from a council estate wanting to show the world that I had something in me.  I didn’t know exactly what it was I had to offer. I just knew there was something. So when we collided together on songs like ‘7 Days’ and ‘Fill Me In’ – it was just this fusion of madness. In the studio, we came from different places and looking back, I guess it created something quite magical. I think that’s how ‘7 Days’ came about. If I had perhaps ended up working with Rodney Jerkins or Jermaine Dupri, then those songs would never have happened. ‘7 Days’ needed that different musical flavour from different backgrounds.

‘Walking Away’ is another one of those songs where every time I listen to it, I get goose bumps and my eyes get a little soaked.

It’s a surreal feeling when music can connect in such away. I also get the same feeling from listening to other music. I think when a song connects with you – you will forever remember the very first time and place you heard it. It makes me happy that it has connected in that way. Money is great as it can buy you pretty much anything you want, but when you’ve driven the expensive car a few times it wears off. The one thing that never changes is when you’re telling me stuff like this about my songs connecting with you for life. It’s even more powerful than any car money car can buy.

You’ve enjoyed huge success over the last two decades. I would imag­ine it’s kind of hard for you to live a normal life. I mean, you can’t just walk down the street and not be noticed, right?

Yeah, in some places more than others. I think if you kind of just do your thing you find that you actually can lead a more normal life than what people expect. It’s only when your mind starts to create these illusions of ‘If I walk outside this is what’s going to happen,’ half the time other people are in their own little world. They are not looking for Craig David, so in some ways I do live as normal as I can. I don’t make a big effort to be seen. How can people with massive bodyguards walk on the streets and expect to be anonymous? How does that work? Justin Bieber tweeted in 2011, “I got to meet Craig David who has been an influence since day one. I’m a huge fan.” Were you surprised to hear him paying homage to you?

To be honest, the fact that my music has connected with him is really flattering. It’s really beautiful to see the success he has gone on to achieve. It reminds me of watching Britney Spears and Justin Timberlake’s rise in coming from a teenage sensation, and then growing into these artists we all know and love. I have loved watching Justin’s journey as he is now turning into a young man. I cannot wait to see the next phrase of his career.

You have a hard-core fanbase. What’s the craziest thing a fan has ever done to you?

There was this slightly older woman who always carried a guitar, and if I was at a TV station or on a radio show, she would turn up to different places. One minute it’d be in London and the next in Manchester, and she would literally be travelling almost to every destination that I was in playing her guitar. The music wasn’t that great, but I loved her dedication. However, it started to get a little freaky when she would turn up in different countries doing the exact same thing. I’d be on tour in Germany or Paris and she’d literally just be there. It was a little too much.

Your personal style has definitely evolved over the years. Do those old outfits make you cringe?

A lot of my older clothes are actually still in my mom’s house. She has kept hold of everything – the baby outfits all the way through to the teenage stuff. Also the old skool Mochanio garments with a lot of colours and writing all over them, which I wore when I was on the garage scene, the beanie caps, denim jacket and jeans – she has got everything. It’s great to look back at them sometimes, but I don’t think I’ll be rocking any of them anytime too soon.

They might be worth a fortune in years to come – she must hold on to them. Not to get all Jeremy Kyle on you, but what’s been your most difficult moment, career-wise?

The most testing time obviously was being paired with the whole Bo Selecta! thing. In some ways it was really needed because only now I really understand that it was only self-created by the virtue of what I was doing. I was one of Leigh Francis’ characters, and so was Michael Jackson, David Beckham and a lot of other people who were enjoying success at the time. For me I was confused as I didn’t really know why people would lose themselves in it and were not focusing on my music anymore. The music wasn’t changing. It was still maintaining the level, but it seemed as a person I wasn’t cool enough.  It was a really challenging time, but now when I look back in hindsight it was really needed. I think you can get caught up in the industry so much that sometimes you need to step back a little bit. I needed to step back to reflect on what I was doing and where I was going. I am almost thankful in some ways. My music now and where I am at in my life is so much clearer. All those things were actually a realisation, and it was a good thing for me.

Which artist gets the Craig David “Born To Do It” Award?

There are loads of RnB artists whom I love, including R Kelly, who would be way up there. But then in terms of somebody who changed the game, came out of the box and held it together – I would have to say Eminem. Lyrically, what anyone else didn’t want to say, he had the balls to say it.

Craig David will play the following dates on his UK tour:

Tickets are now on sale click here for more information.