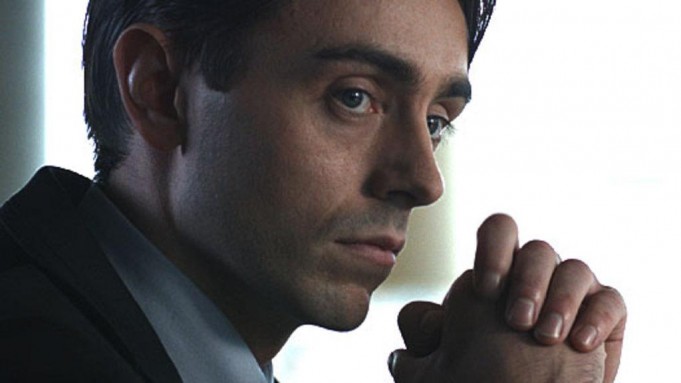 With the release of ‘The Last Kingdom’ on Blu-Ray and DVD on the 14th of December, He sat down to answer a few questions about the show.

Q: Your Alfred is quite weak and weedy and not the great warrior king, which many people think…

A: You see that huge statue in Winchester of this grand warrior king and then you read these books and these scripts and see that he might well be the frailest, thinnest, weakest man in the room surrounded by all these warriors. But he is the cleverest man in England and that really excited me. Maybe that is the better weapon to have against the Vikings. He is very complex. Although he has this incredible vision of what he sees for Wessex and to take back England, he is also incredibly flawed with his lust for women. I love that big mix. He is a bit of an anti-hero in that respect.

Q: That must make him an exciting character for you?

A: Yes, he has such a long arc. At the beginning of the story he is a prince who spends all his time in the library reading books. And then his brother dies and all of a sudden he is thrown into this position he never sought, and people who all want the crown surround him. And then to see his progression into being the king by the end of the series is great.

Q: Do we see him being lusty on screen and carousing with women?

A: Yes. There is a bit of that going on and lots of deep regrets for him afterwards.

A: It got described to us as a ‘bromance’ love story. They can’t stand each other at the start of the piece but at the same time they need each other incredibly. Alfred’s cleverness becomes his biggest weapon because he has knowledge of the enemy, knowing not only how they fight but what they are afraid of. Also, what is clever in the two men is how incredibly different they are because you have the good-looking strong warrior, who is impulsive, and then you have this other really frail and incredibly clever man. They are like two completely different weapons clashing.

Q: Did you know much about this period of history before you started?

A: No, though I love history and I have done quite a few things. I did Ripper Street for three years and Banished recently so I am really grateful for that chance to be paid for looking into the past. There’s nothing more exciting than turning up and seeing these amazing sets. There is no acting required really when you look at that amazing Winchester set. I can’t believe the design of it. I think it is incredible, the epic nature. I have never worked on anything so epic as this.

Q: Is there a secret to playing a king and acting regally?

A: What I love about him is that he is ever-watching and incredibly still for a lot of the time. His biggest weapon is that nobody knows what he is thinking. That gives him power in a room. The great thing is that when you look at him I don’t think you see a king. I think he has a fight on his hands in that regard. His vulnerability is that he knows people don’t really see him as a typical warrior king. That is something he always has to fight through with his intellect. And he did amazing things to educate his kingdom. He is good at communicating with everyone around the kingdom rather than being someone on a horse going around and giving orders. He wanted to communicate with everyone around England and ensure we are all working as one.

Q: He is the first king of England…

A: Yes. What I respect in him is that all the kings before him wanted to kill their enemies, seeing that as the best way to get rid of them. But Alfred wanted to educate them, negotiate with them and therefore control them a lot better, and not kick them out. He wanted to convert them to his way of thinking and only as a last resort would he look to kill them

Q: Has he got a strong conscience?

A: Yes. He has an almost dangerously devout faith in God and believes that every decision he makes is because of this one being above who will be on his side throughout.

Q: Do you get to do any killing?

Q: How is his relationship with his wife? Does he still love her despite his infidelity?

A: Yes. Historically, it was a marriage of convenience to bind Mercia and Wessex together. But I think he has an incredible love and respect for her even though he doesn’t necessarily lust after her. I think it is good to have these powerful women in the story as well, standing behind these men, and she certainly is that. She is a battle-axe behind Alfred.

A: I have got to book five and I am so far away from where we are in the series, I have had to stop. They’re great, though, and I’m very lucky. I have never played a part so complex on screen before with such a huge character arc. I would have chopped their hands off to get this part. This time period is a lot more brutal and you are not restricted by the manners and society of Victorian England or Georgian England. It is a far more dangerous world. But the costume’s not as dapper as in other films. The Vikings get the good outfits!

Q: What have been some of your favourite scenes?

A: The one that I really loved was Alfred’s coronation. We did that early on and there were about 100 extras all in that palace that we were in today and it goes further back into two other rooms. That was nerve-wracking. But it was a very special day when you realize the scale of what they are trying to achieve.

Q: You must have enjoyed shooting in that amazing library they’ve built on set?

A: Yes, especially early on. The really sad thing is that in episode seven the Danes surprise us, and trash Winchester, so that beautiful set is going to be ransacked. That is quite sad.

Q: What did you think when you first saw the Winchester set?

A: I think the design is stunning. I couldn’t believe what they have invested in this project. It makes you want to work hard and do the best job you can. I really care about it. There are no egos involved. They have picked a great cast from all over UK and from all over Europe. There are loads of different rhythms, which is exciting to be on set with.

Q: What do you make of the way the show is shot?

A: What I love about it is that it is really grubby and ugly, in the best possible way, which makes it look more dangerous and real. It is mostly naturally lit as well and a lot of the time they do a lot of, I think [director] Nick Murphy calls it the golden slate. He tries to do the entire scene in one long take. They try to do a lot of that and that to me is like going back to the theatre, which is brilliant. You are moving around with the crew, across each other’s path all of the time. That is really exciting.

Q: Are you a natural horseman?

A: Not at all. I am absolutely awful. We got trained and with my horse they said, ‘You are going to meet McFlurry in a minute,’ and I thought they were going to give me this cute and friendly horse but no, it was this big monster! He knew there was a fool on his back and he wasn’t going to have any of it for a while. But I got the hang of it.

A: I am quite a shy person and I think he is as well. He is awkward and quiet in his own skin.

Q: How do you cope with being shy as an actor?

A: That is why I do it, really. You get to be somebody completely different. You experience the extremes of behaviour that you would never get to in real life. I relax in front of the camera. It’s make-believe.

Q: Have you seen a big change in Alfred across the season?

A: I think so. He is far more confident and a bit more ruthless than he was to begin with, and I can’t wait to see what happens next when he becomes a broken man. And then he is always crap at delivering speeches to his troops because he is not that kind of man. But he has to deliver this rousing speech at the end to send all his troops into this final battle to save England. I can’t wait to see what that will be like.

Q: Do you think the audience’s opinion of Alfred will change very much across the series?

A: I don’t know. When I read the books and from what we are doing, I don’t know what side you will be on because sometimes Uhtred makes some really bad decisions and sometimes Alfred does. So I hope that the audience is constantly conflicted, and then you have all these great characters around them as well. I am excited to see what an audience will make of it. There are no goodies or baddies. Even with the Vikings there is a tenderness there and love with lovely Brida and there’s Queen Iseult. I can’t wait to see what an audience makes of it all!

Q: Are you a fan of things like The Lord of The Rings and Game of Thrones?

A: I love Game of Thrones. I have a lot of friends on it as well. So, yes.

Q: Who are your mates on Thrones?

A: Kit Harington. We did Posh together and he got the job when we were at the Royal Court together. I remember coming to rehearsal one day and he said, ‘I can’t move.’ He had been five hours with a personal trainer to get him bulked up. He was suffering.

THE LAST KINGDOM IS AVAILABLE ON BLU-RAY AND DVD ON 14TH DECEMBER, COURTESY OF UNIVERSAL PICTURES (UK)