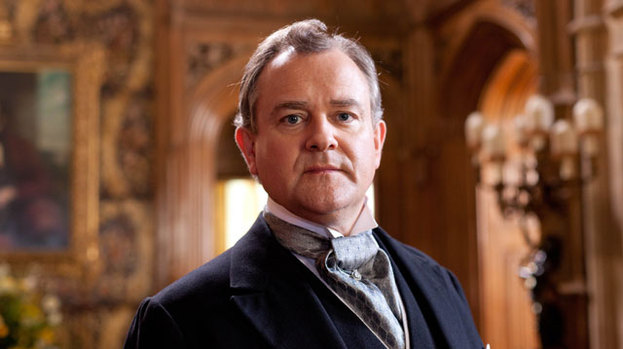 His film credits include Notting Hill, Mansfield Park, Iris, The Monument’s Men and the recent adaptation of Paddington. Recent TV credits include the award-winning comedies Twenty Twelve and W1A…

Q: How sad were you when you realised that Downton was coming to an end?

A: It was sad, although from a personal experience it has been a ridiculously happy six years doing a project that we all love, sharing the workload and sharing the friendships. It felt strange to be finishing, but it is the right thing to do. It will feel strange next spring when we are not putting on thermal underwear to start filming again in freezing cold Highclere Castle. I think it will take a couple of years to sink in, for us to realise what it means to us all. Right now it is just a very happy, pleasant memory.

Q: Lord Grantham is often seen as slightly conservative but in the final season he is looking forward and embracing the future…

A: Yes. He reminds me more of the Robert from the very first season, and that is what attracted me to the character. He is conservative by nature and by definition — because he is conserving the estate and his sole purpose in life is to hand it on to the next generation. But he is a man of liberal instincts, and that ebbs and flows through different series when he became at times an emotional dinosaur and couldn’t see things that were staring him in the face. His IQ dipped at times, too, I thought. [Downton creator] Julian Fellowes, though, always writes redemptive qualities into all his characters.  Season 6 starts with a bang when we go and visit our friend Sir John Darnley (Adrian Lukis) and his estate at Mallerton being sold off. Darnley says to Robert that he shouldn’t make the same mistake; it’s no use sticking your head in the sand and hoping everything is going to stay the same because it’s not. Things have changed and we can no longer make the income outstrip the expenditure. That’s a real wake-up call, literally, seeing the family portraits sold off. Robert goes back to Downton and knows he has to make changes. And with Mary now strongly at his side, running the estate, they’ve got a good chance.

Q: Do you feel it is quite a liberal show? It deals with contentious subjects in a very open way…

A: Yes, it does. The structure and the setting are conservative, with this estate that owns a village and which is very patriarchal and feudal. But it deals with themes like homosexuality with a great deal of compassion and fairness. And I don’t believe those people who say that it wouldn’t have been like that. Homosexuality has been around since humanity began and different societies at different times have reacted in a different manner. This was an era when it was outlawed and yet we cannot deny it existed and Robert two or three times throughout the series has stepped in, saying, ‘Where’s your humanity?’ which I think is a liberal outlook in an otherwise conservative framework. It shows the different shades to all these characters. They don’t always do as you might expect.

Q: Running the estate is like running a corporation. How do you think you would have got on in real life?

A: It is like running a corporation. You are running a village and are looking after lives and livelihoods. This was a world before the NHS and before any proper social welfare. As Lord of the Manor in this type of fiefdom, however one might look at it, you have a massive responsibility. There is no point thinking he is an evil landowner abusing the people that live there. If that happened, the lord wouldn’t last five minutes. It is in his interest to keep his team alive. On Downton, he seems to be a fairly benevolent dictator. Anyway, I would have been hopeless. I would never be able to match that level of responsibility. You think Robert sits around not doing very much, just looking at a few bills here and there, but the reality is that he is running a vast organisation and all the cogs in the engine room need oiling all the time. It is not something I would have liked to face.

Q: How important has it been to appear in other popular shows on TV, and to do films, alongside your role in Downton?

A: That has been very fortunate actually. We did the first season of Twenty Twelve even before Downton had started. Personally, it has been very satisfying as they’re two completely different genres. I’d like to think it doesn’t pigeon hole you too much, although, of course not as many people watch Twenty Twelve or W1A as watch Downton. I’m very fond of all these shows. If I had only ever done Downton I would have been a very happy man, but I think I might have been stuck in a bit of a rut. But to be able to flex your comedic chops doing W1A, and Paddington, has been really lovely and I hope it means I won’t forever be cast in roles that involve Labradors!

Q: You’ve had a long and successful career but how profound an impact has Downton had on your working life?

A: A case in point is The Monument’s Men, the film I did with George Clooney, which certainly wouldn’t have come along without Downton. And, again, enormous credit goes to Julian Fellowes. Being an actor, he knows that these opportunities don’t come along very often. When I told him that one of the issues with The Monument’s Men was that they needed a three-week window in the middle of our shooting schedule to do a particular sequence, he said, ‘I’m going to make it happen.’ He knew this was a great opportunity and also wanted to show that someone could be in Downton and also do other things. There was a nice coda to that as well because Bob Balaban was in The Monument’s Men and he was the guy who’d brought Gosford Park to Julian [who wrote the film’s screenplay], and Gosford Park, of course, led to Downton. And Paddington wouldn’t have happened without Downton, so I feel very blessed. And if people come up to me in ten years time and say, ‘You were in Downton Abbey,’ I’d feel great pride.

Q: How has your anonymity been affected? Can you stroll the streets of London without too much hassle?

A: No, not really, not anymore. It’s just a by-product of the ways things are. In the age of the camera phone it’s a bit weird when you’re sitting having dinner in a restaurant and people think they’re being very subtle taking a photo while in fact they’re being very obvious. When you’re in a middle of a mouthful with friends or family and people come up asking for a photograph, that’s when you want to say, ‘Actually, I’m going to say no; I’d like to finish my meal. This is my time.’ It happened not so long ago in Bampton in Oxfordshire [the village when much of Downton was filmed]. I was having some breakfast and my fork was literally to my mouth when someone asked for a photograph. In the end, he waited until I had finished and he took a photograph with me outside. I think it’s because of the prevalence of the camera phone and the selfie. We did a press day in New York last Christmas and it was the first time that not a single person asked for an autograph. They all asked for a selfie. It’s a different mind-set. It is something to show rather than something to collect.

Q: What have been some of your personal highlights from across the six seasons?

A: I think the whole sequence around the death of Sybil in Season 3 was very beautifully written and the story it gave us between Robert and Cora (Elizabeth McGovern) was wonderful to play, very fractious, and very well handled. I really enjoyed the Simon Bricker, the art historian, storyline. That was a hoot — I love Richard E. Grant — and it was a great scrap that we had. There’s some stuff in Season 6, which is my absolute favourite. I had to read it twice before I could take it in. It’s a fun moment for the audience!

Q: Have you got any mementos from the series?

A: I liberated a letter that was written. One of my great affections for the show is the detail to which the art department go in everything they do. All the letters or telegrams that we receive at the breakfast table or the study or wherever, which the audience never sees, are always beautifully composed. They’re written accurately and appropriately to the scene we are in. I pinched one from Matthew Goode’s character, Henry Talbot, writing to invite us to some event. So that’s going in the scrapbook.