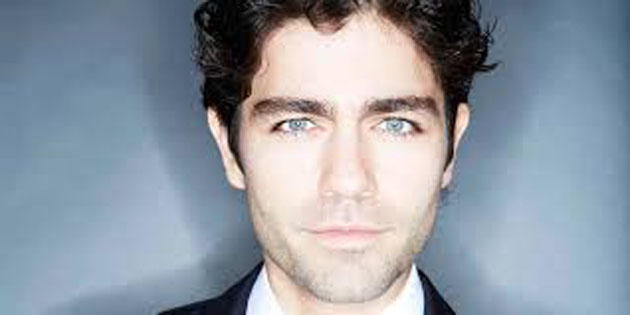 The boys are back and leading the pack is Vincent Chase. After eight hugely successful seasons on HBO, Hollywood-set comedy-drama Entourage makes the leap to the big screen. Reprising his role as A-list star Vince is Adrian Grenier, an actor both as laid-back and beloved as his character.

Born in New Mexico and raised in New York, Grenier began his acting career in 1997, and swiftly made an impression, gaining a role in Woody Allen’s Celebrity. He soon followed it with parts for such maverick talents as John Waters (Cecil B. Demented) and James Toback (Harvard Man).

Yet it was winning the role of Vincent Chase in Entourage that changed his career. While the show concluded in 2011, the film picks up with Vince setting out to direct his first movie, with the help from his loyal posse of pals – manager E (Kevin Connolly), brother Johnny Drama (Kevin Dillon) and former driver Turtle (Jerry Ferrara), not forgetting his ex-agent-turned studio head, the incorrigible Ari Gold (Jeremy Piven). Below, Grenier discusses how it felt to reprise Vince, his favourite celebrity cameos in the movie and why he thinks the show’s creator – and the movie’s director – Doug Ellin has a time-machine.

It’s been four years since the show ended. Are you surprised how long it took to get a movie of Entourage off the ground?

If you ever watched Entourage, you know that’s the nature of the business. Is it going to happen? Is it not going to happen? Who is going to finance it? Is there a script? It just seemed par for the course in my mind. And I always had a lot of faith, like Vince does, that it will all work out. You just gotta manage your expectations and keep chugging along.

When you got back on set, was it like slipping into a comfortable pair of shoes, playing Vincent Chase?

I wasn’t sure that it would fall into place, as it had for so many years. But, yeah, it was exactly like that. Acting is reacting, and when you’re in a scene, playing iconic characters – Johnny Drama, E, Turtle – you don’t have to do much but be present and respond to what they’re doing. It’s really this symbiotic rapport that makes it so seamless.

It seems perfect for Vinnie that he directs a movie. Was that always something you had in your mind that he should do?

I actually was the one who suggested it. The earlier ideas, or drafts, were different. Doug always borrows from real life, out in the world, the zeitgeist, but also from our personal experiences. I’ve directed, so it seemed like a natural progression. I didn’t think it was going to be a $100 million movie!

Do you think Vinnie’s directorial debut, ‘Hyde’, is a good movie?

Totally! Vince has had a virtual education in filmmaking, working with [Martin] Scorsese and James Cameron and Frank Darabont, and being in monster hits. It totally makes sense. Vince is sensitive and instinctive enough to do something fantastic.

Entourage often seems to have pre-empted Hollywood trends, like the upcoming Aquaman, for example. Did that always amaze you?

I’m convinced Doug Ellin has a time-machine! So much that happens in the show comes to life in reality; Aquaman and The Great Gatsby, and Ronda Rousey, who was a relative star in MMA, and now is a superstar…he just has his finger on the pulse. Even Kanye…before Kanye was the Kanye we know today, [he] was on our show. And the soundtrack often predicts what’s popular, or helps to define it. That’s the symbiotic relationship. He’s prophetic!

Is the movie different to the TV show or more of a continuation?

I think it’s more of a continuation than not. But it really gave us an opportunity to display and present Entourage the way people had always wanted to experience it: in large groups. People would get together on Sunday night and bring all their friends and watch it if they were at a movie. They’d watch multiple episodes. So they wanted more of it. So this is just more for the fans, shown in a way they’d always wanted; it’s a raucous experience in a communal setting.

Yeah, He really speaks his mind in ways that in a civilised society we’re not encouraged to. He’s the Id.

Is Ari typical of the agents you’ve met along the way?

No, but I think that’s changing unfortunately. People are looking to emulate a fictional character [like Ari]! I feel sorry for people who have to be at the other end of people living out their fantasies.

The show is famously inspired by Mark Wahlberg’s posse. How much is Vince like him?

He really gave us permission to iterate and play off of the core concept, which is Mark Wahlberg, a famous person, supporting his friends – and then we could run with it. I don’t think I could ever have created an authentic celebrity, imitating another celebrity. Celebrities are celebrities because they’re unique individuals. Vinnie had to be Vinnie.

The entourage we see with Wahlberg in the movie, are those his real friends?

Those guys? Yeah. That’s his real entourage. At least a small faction of a larger entourage!

Who has been your favourite cameo in the show?

We’ve had some great cameos over the years. Certainly, we’re chock full of them in the movie. But I’m always partial to the recurring ones, just because it’s nice to have worked with them over the years, like Jessica Alba or Gary Busey. There are a lot of them that keep coming back, which is awesome. But we’ve been lucky that people are vying to be in it. They want to do it. They’ll work for scale. They’ll be self-deprecating. We’ve been shooting in Beverly Hills sometimes, and a celebrity will be walking by, and Doug will say, ‘Hey, you want to be in the movie?’ And he’ll write them a line. I don’t know the story behind every single cameo – some of them were written in, some of them were written as someone else and replaced.

Do you think the fans will appreciate characters like Billy Walsh returning?

You started your career, oddly, in Woody Allen’s Celebrity, credited as one of the Leonardo DiCaprio character Darrow’s entourage…

Yeah, interesting. Brandon Darrow was his name. I was in Leonardo DiCaprio’s entourage! Have you ever seen my documentary Teenage Paparazzo? Have a look. I think you will enjoy it. I break down celebrity obsession, from a deconstructed inside look of my experience of becoming famous by playing a famous person in a show about fame. It’s pretty cool. But I do talk about getting my start in Celebrity, in an entourage. It was my fate!

What are the crazy things that you’ve seen in Hollywood? And how much is it reflected in the show?

It’s really a weird blur between fiction and reality. Sometimes the show is exaggerated, based on something true. And sometimes the reality is too crazy to put in the show.

Well, we take great pride in being able to make the lines feel improved and the rapport to show good chemistry. Sometimes they’re a lot of fun, but at the end of the day, we’re working twelve hours. We have to be there and we make it look fun.

Well, we have this effortless point of view; you’ve got to remain a little bit Zen. We coast. We don’t sweat the small stuff. We don’t get burnt out by the business. But we’re very different. I would certainly have driven a hybrid [car] a lot sooner than he did. I would never have driven a Hummer. I’m looking to bring some attention towards conscious consumption, whereas Vin and the boys are more about conspicuous consumption.

How do you feel about your time on Entourage?

I have a great sense of responsibility to our fans. We made a decision, a pact, to do a series. It was successful. People liked it. And you’ve got to take it seriously. We defined an era. We inspired a generation. Now there’s a new generation that were too young to watch; a massive group of people that perhaps didn’t have HBO or just missed the show. And we’re committed to our commitment; the loyalty that the Entourage boys have with each other, I feel for our extended entourage, which are our fans.

Would you like to get back together with them again?

Absolutely. We’re here as long as there is demand.

Yeah, I have a couple of things in development – television properties as well. It’s very different, though, to go behind the camera. It’s exciting on an intellectual level and creative level. You really get to be a part of the whole thing from beginning to end. You get to really put your stamp on something; you get to communicate things that are going on in your head, your soul. You’re not just a gun for hire to carry out someone else’s vision.