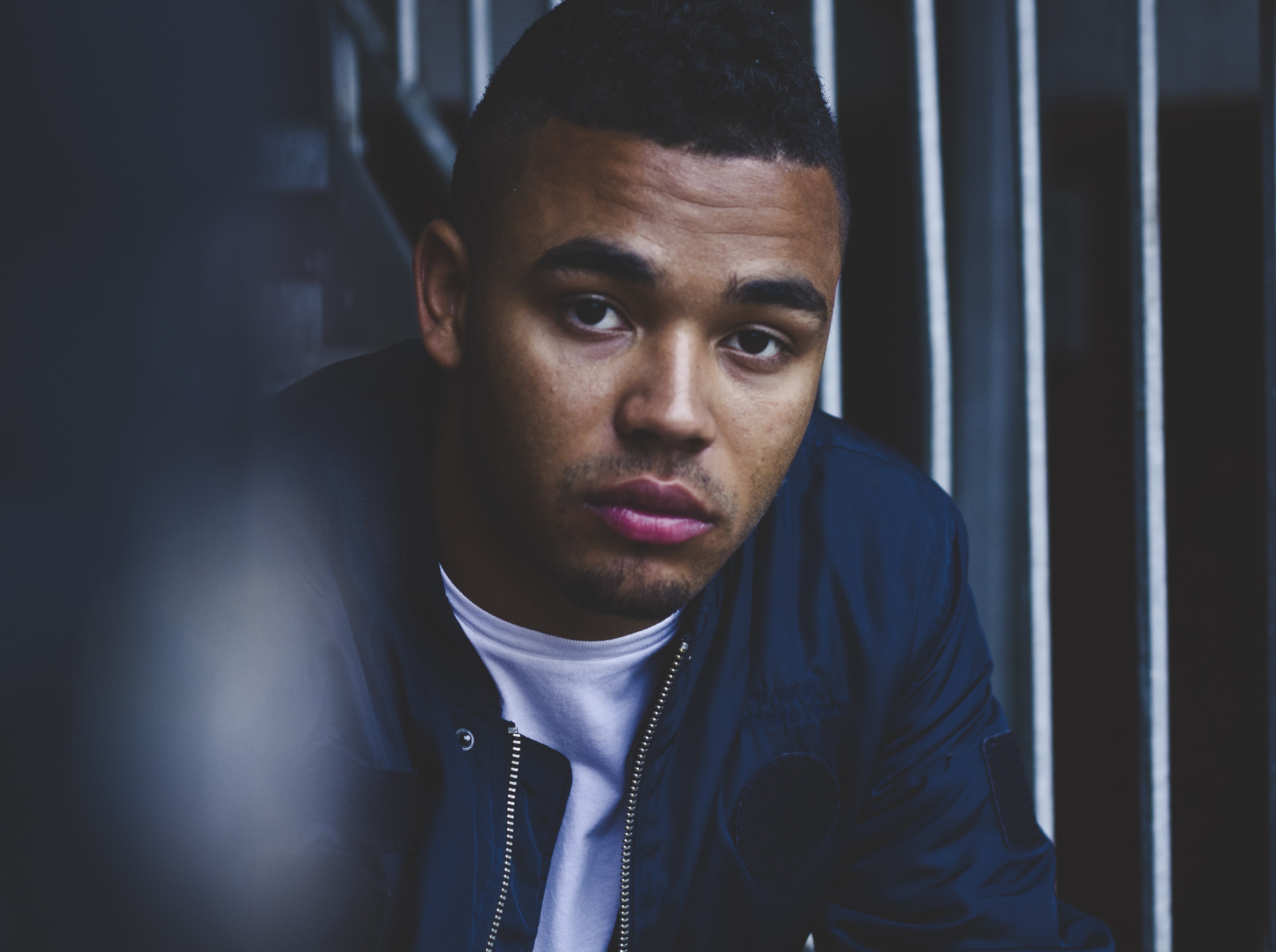 Yungen is the lyrical word-smith hailing from South London and is steadily gaining popularity. He is set to release a club banger ‘Money, Doe, Paper’ on September 29th and achieved 15,000 downloads with his first mix tape ‘Topic Of Discussion’. His fan base is ever growing and he gains thousands of hits on YouTube. We sat down with the 21-year-old rapper to discuss his music, how he feels about his surprising success and his thoughts on that Kendrick Lamar ‘Control’ verse.

You have a new single ‘Money, Doe, Paper’ out September 29th. Where did the idea for ‘Money, Doe, Paper’ come from?
I was in the studio vibing and maybe I was just thinking about money or something and I just wanted it to be different. The beat was clubby and I didn’t want to talk about a club. My actual concept of the song is you work hard and then you spend your money in the club…without saying were in the club.

How long did it take you to write the track?
Literally we banged out the whole track in one hour and a half to two hours. Maybe an hour but I don’t wanna say an hour if it wasn’t an hour (laughs).

Is that how long it takes you normally make a track?
No, but ‘Money, Doe, Paper’ is probably the quickest track I’ve done. How would you describe your music & style?
I like to be very lyrical. Recently we have been working on some up-tempo stuff, fun music but still trying to keep the concept there and very lyrical.

You’re known for your wordplay? Is this quite important to you?
Yeah very, very! That is what I enjoy doing when I’m rapping. I don’t like just rhyming.

Who inspires you the most?
I have Krept & Konan around me a lot and where they’ve got to and been through that makes me think I can actually do this.

US wise, I like to watch Jay Z. I watch his interviews and what he is doing in his shows because that is where I’d like to get to. Jay Z is more than just a rapper and I love that. He has his business on the side and obviously he has Beyoncé.

Getting back to your music, you’ve have worked with a lot of artists, Krept & Konan, Chip, Tinchy Stryder to name a few, who has been your favourite?
I would say Krept & Konan because we are actually friends so it’s never been forced. It’s just a vibe but with all of them it’s like that. Literally when I did the song with Chip it wasn’t forced or with Tinchy. But mainly Krept & Konan. I’m around them in the studio a lot, making music together and giving each other ideas. They have definitely been my favourite to work with.

Who would you like to collaborate with next?
Definitely my next collaboration I would love for it to be Ed Sheeran. I love that guy, I’m a massive fan. I like the track ‘You need me, I don’t need you.’ I can relate to it.

Why do you relate to that song the most?
With some people I just feel I don’t really need you but I feel like I’m going to prove that you need me. I just feel the vibe from that song.

So Ed Sheeran has been quite a success story and you yourself have also. How do you feel about the success of your first mixtape ‘Topic Of Discussion’ it achieved £15,000 downloads?
It’s amazing because it shows that everything I’ve been doing previously has been shown in the downloads. With a lot of people they get loads of views and get a lot of love on twitter but when it comes to their CD getting downloaded people will not go out of their way. But it shows that I have built a good fan base, a good solid core fan base.

Now the topic of discussion lately is Kendrick Lamar’s verse on Big Sean’s ‘Control’? It had social media buzzing. What did you think of his verse?
You know what people are saying it is the best verse of the year and I don’t know about the best verse of the year. I think Jay’s verse on ‘FuckWithMeYouKnowIGotIt’ is better that Kendricks’ verse. Kendrick is very slick though. The verse was very good. When I woke up and saw everyone was talking about it I said I need to check this out and he went at everyone. I wanna hear J.Cole reply or Drake or even Meek Mill. That will be exciting. But I am happy about it because it has brought the competition back to rap over in America. It needed that.

Do you think UK rappers will be able to compete with the Drake’s, Kendrick’s and J.Cole’s one day?
Yeah, but I think we need to work together. I think the UK scene is too busy against each other. You have seen the biggest collaborations; you’ve seen Ace Hood, Drake, Rick Ross and Lil’ Wayne all on one track. They all link up and they make music together but you don’t see that in the UK. Everyone has their own sections, their own batches and don’t really make music together. People would love to see a Wretch 32 and Skepta track; I’ve never seen it and would love to see it. So I think if we work together more and we need to build rap, make it stronger so people can say yes this is UK rap. I mean we can actually rap. I think the America’s don’t take us seriously, their like ‘yo, you lot can rap down there’ (laughs) I don’t think they believe we can actually rap. But I think it is possible and we’re on our way. We are building it.

You have jumped on few American tracks. Tyga’s ‘Rack City’, Jay Z & Kanye West ‘Niggas In Paris’. Most recently Drake & Migos track ‘Versace’. What made you decide to freestyle on that ‘Versace’ beat?
I was in the studio and it was a vibe…versace, versace..I just thought the song is different, so I said let me just mess about and have some fun. It wasn’t like I want to write to this. Then I did it and recorded it and my friends were like this is hard you need to put it out! So I called my camera guy and said I wanted to shoot a video. Then we put it out. I think it is important that I put it out before everyone else.

Your Versace remix on Youtube has had over 100,000 views in three weeks.
Yeah massive! I think that is what they like from me. I think they like to see me covering American videos..to hear me rap! I think when I actually make my songs now people will listen to what I’m saying instead of them just listening to the hooks. I think their actually gonna listen to the verses. So is your style more American influenced?
I don’t really try to rap like an American or be American but growing up as a youngster we didn’t really have no UK rappers. I think Giggs was probably the first like proper rapper in the UK and that wasn’t too long ago. It was all American. (At this point Yungen starts playing with his burger. He removes all the tomatoes, onions, gherkins and sauce – leaving just the plain burger and bun. I asked him why, he said ‘I do not like no salad at all, I don’t like none of this and I don’t like mayonnaise.’ His manager just laughs.)

Would you like to break America?
Yes I would love to! I love what Chip is doing over there (he’s signed to T.I’S Grand Hustle) I think it’s sick! Tinie Tempah I know he spent a lot of time over there in the last few years and he now has a song with 2 Chainz. This is how I know we are definitely getting out there, 2 Chainz is on a UK rappers single and it’s actually done well…it charted number 3 I think. I would definitely love to work with some American acts.

Would you like to sign to an American label?
Yeah I think it would be sick. I would like to sign to Jay Z. He knows what he’s doing. He produces stars. Rihanna, Kayne, Rita.

Where do you see yourself in 5 years’ time?
I’d love to be doing tours and selling out shows. I’d love to be an established act. Right now I’m very new and I’m very young. I would wanna be a household name really. I’d love to start with or be breaking America.

Finally anything you would like to say to the Flavourmag readers?
My ‘Money, Doe, Paper’ single is out September 29th and you can follow me on twitter @YungenPlayDirty.