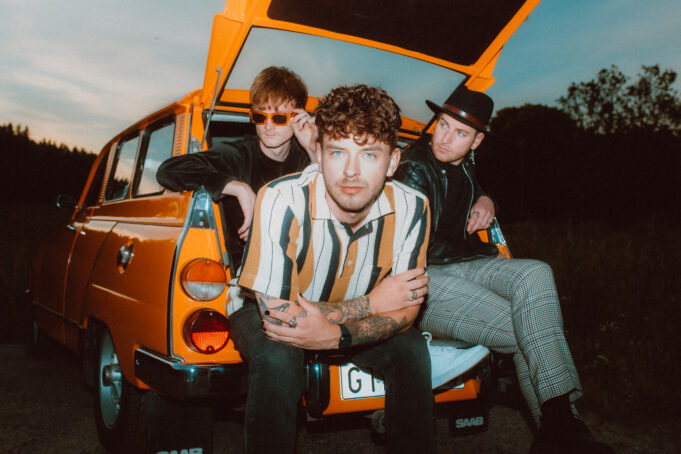 Swedish band Normandie has announced the release of their new album ‘Dark & Beautiful Secrets’ – out 19th February 2021 – 2020 was a great year for music but 2021 is going to be even better.

With Normandie set to release their new album in late February, you can get a sweet little taste of what’s to come with their album ‘Dark & Beautiful Secrets’

We chatted to singer Philip Strand about what it’s like to make music in a Pandemic.

Welcome to Flavourmag! How have you been? Have you taken up any new hobbies during the pandemic?
Thank you! Never been better, weirdly enough. No lockdowns, more work than ever and excited to release an album again!
I’m on my 4th puzzle!! Doing 1500 pieces now. It’s the only thing that can shut down my brain. Puzzles and crosswords!

We’re super excited about your new album ‘Dark & Beautiful Secrets’. What can you tell us about it?
Apart from the cliche “It’s our best album yet. We’ve worked so hard on this for so long. This is 100% Normandie.”?
We went from having 23 demos to 15 tracks, to then 11 and finally 10. Every song on this album could be a single! We produced & mixed it ourselves and it’s the first time I feel like we have a complete banger of a record.

What’s your songwriting process like? Do you do anything to get into the zone?
A classic “Throw anything at the wall and see what sticks”. We’re very open to trying things until they work. “The zone” only comes when we got something new and unique going, so it’s all about going outside of our comfort zone first to then get into the zone.

What track do you hope will be a fan favourite?
I hope Hostage will be the one. It’s a bit of a risk with a longer intro/verse before the chorus, but it’s DEFINITELY the best chorus on the album!

What makes you most excited or scared when releasing new music?
I’m scared that people will listen at low volume. It’s not fair! So if you’re gonna listen at a 20% don’t even bother.
Mostly I’m excited to finally get to be personal and honest about myself in our songs. I find it hard to fake a cool “rock image” and be a product, so it feels great to just be true and see if people dig it or not.

Is there one track you’ve previously released that you now hate or see differently?
Not really! No regrets here. “Pay for this” is a major banger!

Do you think the pandemic has changed how artists create? Was this hard to adjust to?
Hard to say, cause we haven’t had a lockdown so we’ve just kept going in the studio like always. But for bands that haven’t met face to face, yeah I think people have found ways to do zoom sessions. I had a couple of international zoom sessions where I shared my screen and the vocalist could record vocals straight into my computer. That was pretty cool!

What’s one thing fans would be surprised to learn about you?
I don’t listen to music. Maybe 1h per week maximum. Apart from writing/producing music.

What would be the theme tune of your life?
Jon Pardi – Dirt on my boots

Other than your new album, What can we expect from Normandie in 2021?

We’re heading out touring in October, fingers crossed! Europe and the UK! Imagine the FUN that’s gonna be!!